“Sexual assault has no place in our Air Force. We live in a culture of respect. We cherish our core values of integrity, service and excellence. But in order to ensure all Airmen experience and benefit from those values, we must eliminate sexual assault in our ranks.” – Mark Welsh III, General, former U.S. Air Force Chief of Staff 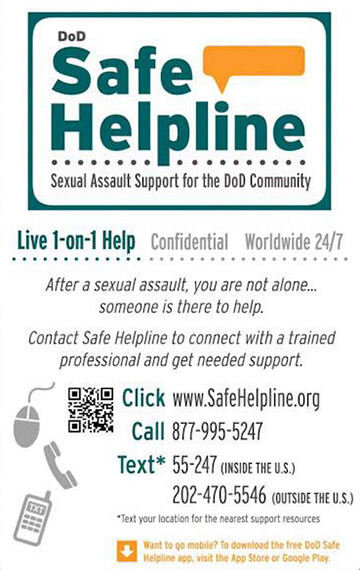 The fundamentals of sexual assault prevention include:

When a victim reports a sexual assault we start our initial response protocol including but not limited to:

Ongoing assistance related to recovery from a sexual assault includes but is not limited to:

The Air Force has avenues for reporting sexual assault in the form of Restricted and Unrestricted Reporting. Restricted Reporting allows a victim to report a Sexual Assault without triggering an investigation. It is intended to give the victim (survivor) time and control over the release of their information. Further, it also empowers the survivor to make an informed decision about participating in the criminal process.

Restricted: Confidential reporting that allows a service member, cadet, adult dependent, or a defense civilian to report a sexual assault and seek support services such as mental health, victim advocacy, and legal representation. Office of Special Investigations (OSI) and chain of command will NOT be notified. Service Members, cadets, who desire Restricted Reporting must use one of the following reporting avenues Report to SARC, Victim Advocate, Chaplain, health care provider, AOC/AMT not in chain of command and/or any SAPR staff member.

Unrestricted: Reporting option for service members, cadets, adult dependents, and defense civilians to report a sexual assault and seek accountability for the reported offender. An investigation will be initiated and “need to know” individuals in the chain of command will be notified. Respect for privacy remains a priority with this option, as well. When selecting Unrestricted Reporting, you should use current reporting channels, e.g.: Anyone who is a mandatory reporter.

Independent: Reporting option for someone other than a victim, such as a friend, co-worker, or mandatory reporter, to report a sexual assault.

Sexual assault is criminal conduct that falls well short of the standards America expects of its men and women in uniform and is a violation of our Air Force Core Values.
Sexual Assault is unwanted sexual contact characterized by use of force, physical threat, abuse of power, or when the victim does not or cannot consent. Examples: inappropriate touching, groping, or fondling for sexual gratification, as well as penetration, oral stimulation, sodomy, or any attempt to do these things.
Consent can be obtained verbally or through body language or gestures as long as they are unambiguous and ongoing. It is everyone’s responsibility to be 100% certain that they have consent. A person cannot consent if they are incapacitated, for example by alcohol, drugs, or sleep deprivation. The lack of physical resistance or a verbal “no” does not constitute consent.