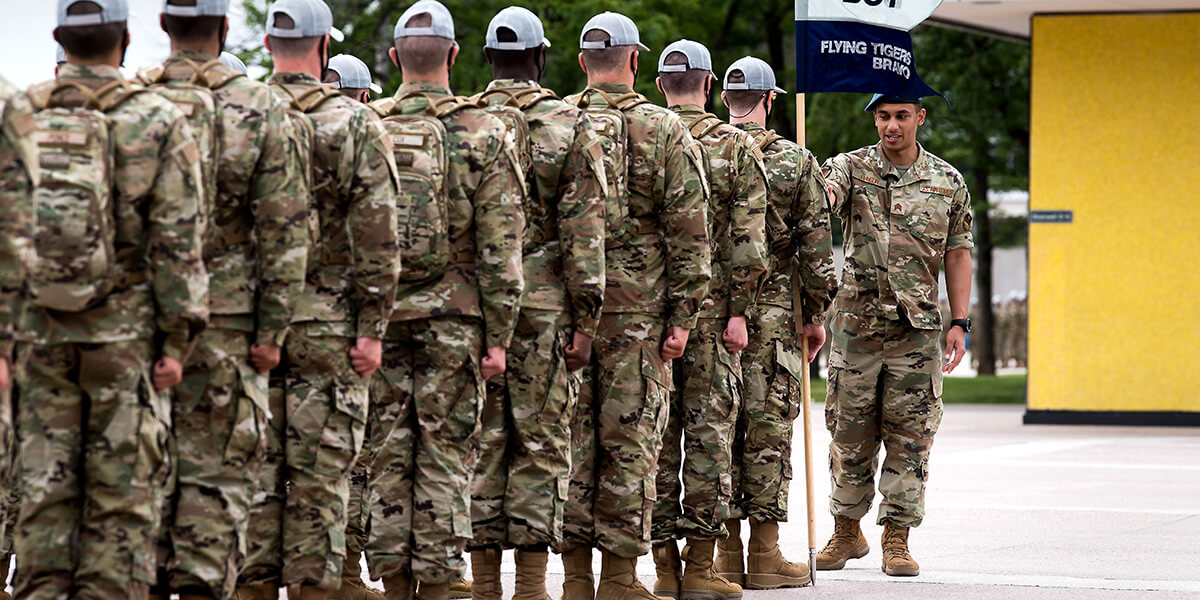 Cadets are provided with a unique and comprehensive education, focused on the profession of arms and coupled with military and athletic training experiences. At the U.S. Air Force Academy, military education plays a critical role in preparing cadets to become leaders in the Cadet Wing and later, in the Air Force and Space Force. Cadets take courses in military strategy, doctrine, heritage and professionalism, while also learning about the communication skills and responsibilities required of an officer.

Each fall, cadets return to the same training complex they first conquered during Basic Cadet Training to take part in the Commandant’s Challenge. The event tests cadet teamwork skills and training to ensure they have the discipline, physical and mental endurance, commitment and knowledge required of the Cadet Wing and the Air Force. Areas of evaluation include: teamwork, physical development and aptitude, leadership of each cadet class, and timed accomplishment of objectives. Points are earned or lost by meeting, or failing to meet, time limits in events and by being skillful and efficient in designated tasks. The Commandant’s Challenge gives cadets an opportunity to practice leadership skills while building and training their teams to succeed.

Cadet commanders at the wing, group and squadron level, as well as athletic team captains, take part in the Cadet Leadership Enrichment Seminar (CLES) conducted by the Department of Behavioral Sciences and Leadership. This forum provides cadet commanders and team captains with the knowledge and skills to improve operational efficiency within their units and teams, further developing their leadership abilities and enhancing the effectiveness of the Cadet Wing.

Who are you as a leader? What do you need to do to achieve excellence? Have you set the stage for the future achievements of the Cadet Wing and your successors? These are all questions that participating cadets will be challenged to consider, with the ultimate goal that these lessons impact their perspective on leadership and being a leader in both formal and informal roles at the Academy, and as an officer in the Air Force.

The four-year Cadet Military Education and Training Plan (CMETP) prepares cadets to apply their knowledge and experience in an operational military environment using the Officer Development System as its foundation. CMETP follows a developmental approach during a cadet’s tenure at the Academy and consists of two distinct Commissioning Education (CE) courses and numerous courses and experiences during the summer and academic year.

Starting in the fourth class (freshman) year, during Basic Cadet Training cadets attend “Introduction to Living Honorably in the Profession of Arms” which helps them learn to appreciate what it means to live honorably at the Academy via Air Force core values and prepares them to take the Honor Oath by understanding elements of the Honor Code and System. A cadet’s first year at the Academy focuses on the foundation of the Officer Development System, the development of personal leadership competencies and Air Force knowledge, including: military structure, Air Force core competencies and distinctive capabilities, the enlisted force, sister services, and employment of forces.

During the third class (sophomore) year, training begins in the summer with the Expeditionary, Survival and Evasion Training (ESET), where cadets learn how to setup modular facilities and contingency utilities, passive defense, force protection, secure individual and team movement, and survival and evasion skills. Cadets begin taking on additional responsibilities and develop interpersonal leadership competencies as supervisors of fourth-class cadets. Exposure to the Officer Development System focuses on establishing expectations, providing skills, exchanging feedback and ensuring professional growth of subordinate cadets. Cadets will also learn more about the basics of military communication and the Profession of Arms.

During the second class (junior) year, cadets serve as cadre members for Basic Cadet Training; Expeditionary, Survival and Evasion Training; and as instructors in airmanship programs. During the two-week Operation Air Force program, cadets are sent to bases across the world and exposed to the roles, responsibilities and expectations of second lieutenants. Cadets experience interaction with limited officer and enlisted Air Force Specialty Codes (AFSCs) and gain a broad officer perspective on both support and operational squadrons. During the academic year, cadets receive additional instruction in practical leadership and supervisory skills as they serve in senior non-commissioned officer (NCO) positions within squadron chain of command. Second-class cadets serve as technical experts in drill and ceremonies, personal appearance and room inspections and develop team leadership competencies to train third and fourth-class cadets.

Lastly, during the first class (senior) year, cadets take the reins of command as Cadet Wing leadership, holding positions of responsibility within Basic Cadet Training; Expeditionary, Survival and Evasion Training; and other underclass summer training programs. Serving as cadet officers throughout the academic year, they develop organizational leadership competencies to lead and supervise the professional development of the lower three cadet classes.