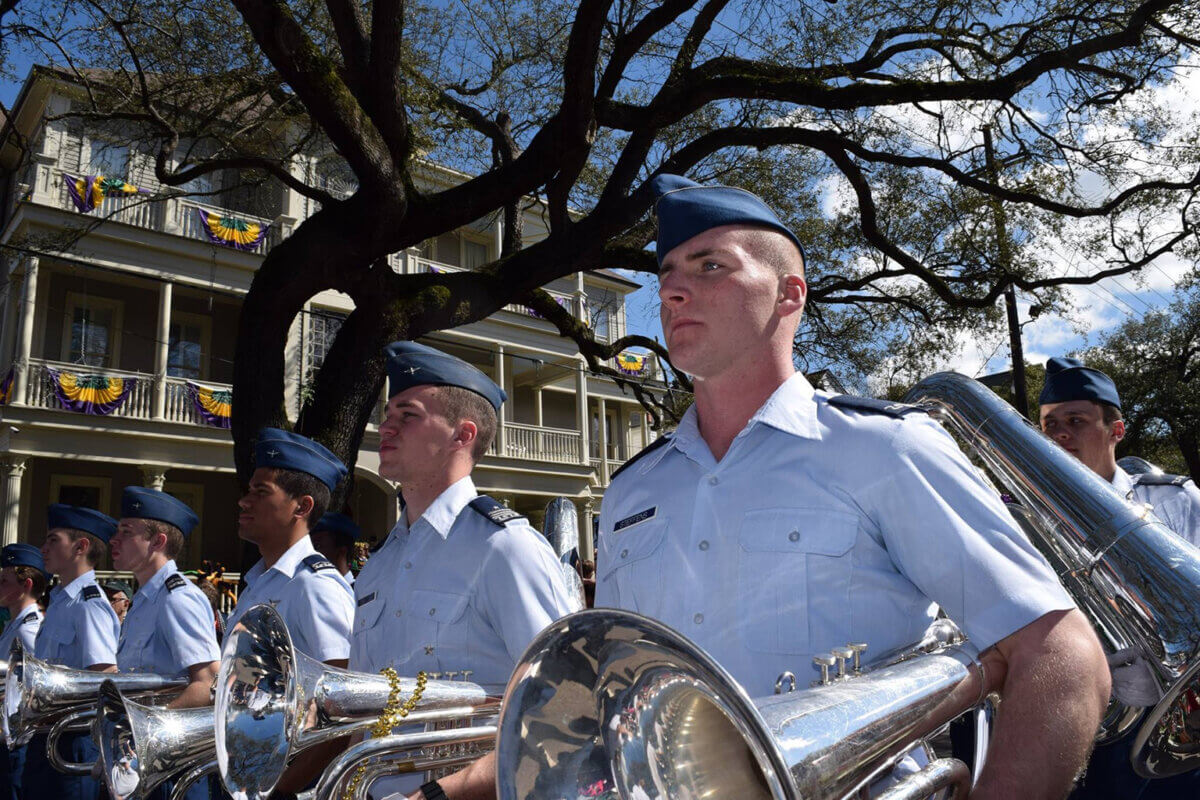 Are you looking to secure an Academy performing unit for an upcoming event? Whether providing military honors or performing precision drill, singing, music, showing the school’s live mascots, flying or parachute jumping; the below groups of cadet volunteers represent a commitment to excellence in their performances.

Besides providing support for official functions to active duty military units, federal organizations or state and local governments, these Academy groups also participate in various community-wide events (such as patriotic holidays) that are free and open to the public. These include schools, veterans organizations, civic groups, youth groups, air shows, collegiate and major league sporting events both locally and nationwide.

The Strategic Communication Directorate is the single point of contact for scheduling these units to perform at any event on or off base and is the initial reviewer for inquiries, requests, processing and coordination of requests.

Since its premier performance with the Denver Symphony Orchestra in 1958 the Chorale maintains a repertoire with a wide range of style and content representing a cross section of America and featuring folk music, Broadway hits, holiday, popular, classical music and patriotic songs.

Cadet falconers use gyrfalcons and peregrine falcon hybrids for flying demonstrations. The Academy’s live mascots have intrigued and delighted audiences across the nation. Trained and handled by cadet falconers, the birds soar and dive around stadiums and other open areas, sometimes zooming low over the heads of spectators at speeds of more than 150 mph. Demonstrations are usually not performed during the birds molting season from May through August. Learn more about our majestic mascots.

The Cadet Honor Guard consists of The Color Guard, a Rifle Drill Team and a Sabre Team. The unit was established in 1974 and what was once strictly a drill organization, evolved into the Cadet Wing’s military ceremonial detail unit. Unit responsibilities include reveille and retreat, color guards for presenting and postings of the colors, 21-gun salutes during funeral details, rifle drill performances and a sabre team for military wedding arches. Learn more about the Cadet Honor Guard.

The Cadet Sabre Drill Team, formed in 1961 demonstrates professional military skills and discipline through the performance of intricate sabre manual. The team was formed in 1961 by cadets who wanted an organization that would exemplify the highest standards of excellence and discipline in using edged weapons. The Cadet Sabre Drill Team is one of the few U.S. military units that perform drills entirely with sabres.

In the Stairwell is an all-male a cappella group; started in 2004 when several freshman cadets decided to start a singing group. Throughout the group’s growth in the past few years, they have performed at active duty military events, the White House and participated in America’s Got Talent. They have performed the National Anthem and patriotic music at military appreciation days or patriotic holidays for the local Colorado Rapids soccer games and other events. Learn more about In the Stairwell.

The Cadet Drum and Bugle Corps presents a sensational experience in sight and sound. Known as the “Flight of Sound,” the Corps has been part of the Cadet Wing since 1972 and has thrilled millions of people with its flash, sound and precision marching. With distinctive brass and percussion instruments, the Drum and Bugle Corps performs a wide selection of music ranging from patriotic and traditional military marches to pop, jazz, big band, the classics and Broadway hits.

From early Sept through early May, the cadets within the performing units have classes, training requirements, finals, breaks and graduation. These take precedence over any requests.

Due to Air Force policies, Academy personnel are unable to participate in certain events such as fundraising and private events.

Do not directly contact any of the personnel in these units about future requests, even if you have done so for past events.

Many of these units are unavailable during the summer (mid-May to late August).

Accepting requests is done on a case-by-case basis. Not all requests can be accommodated.

Processing requests for speakers and performing units takes time. All requests should be submitted 30-60 days in advance. Some units require more notice depending on their needs. Late submissions are less likely to be approved.

The performing units do not charge a fee to perform. In some cases there are requirements that a requesting organization must agree to provide in order to sponsor a unit. Examples are round trip ground or commercial air transportation to and from the event, government vehicles or rental vehicles at the location, meals and lodging (per diem).

Contact and coordination will be between the requesting organization and the Strategic Communications Directorate. Requests through a commercial services agency or commercial intermediary will not be accepted. If you have a client wanting Academy support, please have them contact our office.

The U.S. Air Force Academy Speakers Bureau is an Academy community outreach program designed to increase public awareness of the Air Force, Space Force and the Academy. The Bureau can provide speakers who give information on topics that may not be readily available otherwise.

The Strategic Communications Directorate at the Academy determines eligibility and is the initial reviewer for inquiries, requests, processing and coordination of requests. This is the only point of contact for scheduling speakers on and off base.

Our speakers cover a wide variety of subjects. As members of this volunteer program the base’s military and DoD civilian faculty and staff give comprehensive presentations and speeches on subjects about the military, the Academy, their respective career fields, national and patriotic holiday events or extracurricular activities. Our members are generally available to speak in and around the Colorado Springs area. They enjoy speaking in schools, to youth, veteran and civic organizations, national conferences and other events visiting our area. Under most situations speakers are not available outside our local area, but each request is reviewed on a case-by-case basis.

Read the entire brochure to familiarize yourself with eligibility and requirements before requesting a speaker. To request a speaker, email performers@afacademy.af.edu.