Experts once said falcons could not be trained to perform before huge crowds because they would panic and flee. Since 1956, cadets have shown and flown these majestic birds before thousands of cheering spectators. Audiences across the country have been intrigued and delighted by the aerobatics of the falcon, flying mascot of the U.S. Air Force Academy. Trained and handled by cadet falconers, the birds soar and dive, sometimes zooming low over the heads of captivated spectators.

While their public performances are limited to outdoor venues, such as football games and cadet wing parades, the falcons appear at many other athletic contests and civic events. Cadet falconers currently use Gyr-Saker and Gyr-Peregrine falcon hybrids in flying demonstrations, although they have also historically used Prairie falcons. Hybrids are used because they combine size and flying ability. The birds are flown throughout the year, weather permitting, to keep them in top condition.

Falconry is a fantastic and rewarding extracurricular activity offered to cadets. There are usually 12 falconers, with four chosen from each new class at the end of the year to replace graduating seniors. The new falconers begin training in February under the leadership of experienced upperclassmen, the officer-in-charge and a Master Falconer. It is vital that novices receive proper instruction in order to successfully train and safely maintain the physical health of the birds. Falconers’ duties include daily checks of each bird’s health and condition, training sessions during which the birds are fed a measured ration of meat, frequent cleaning of the mews and routine maintenance of equipment.

Meet our Lineup of 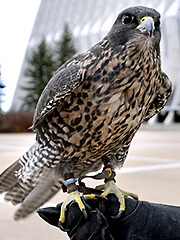 Ace is a 12 year old Gyr-Saker hybrid that performs at halftime of Air Force Academy football games. Ace is actually short for his full name, Achilles, but is fitting with the flying culture of the Academy. Ace is notorious for his love of flight, always eager to fly off the glove and play in the wind. His flying pattern is characterized by sharp turns, climbing high so that he can dive with fantastic speed. Falcons prey on other birds, making them experts at air to air combat. We affectionately call them nature’s fighter pilots, making them a fitting mascot for the U.S. Air Force Academy. 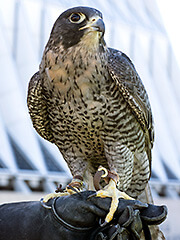 Apollo is one of the Air Force Academy’s performing mascots. He is a 15 year old Gyr-Peregrine hybrid, and is known for diving to brush his wingtips on the grass when flying. Apollo has been flying at football games longer than any of our other birds, but he’s more irritable in his old age. He’s one of the only falcons that we ask people not to pet because he will bite, and can be extraordinarily stubborn. Apollo’s attitude is endearing to his handlers, though we encourage everyone to admire him from a distance. 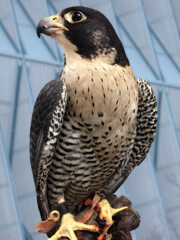 Cairo is one of the Air Force Academy’s newest falcon mascots. She is a 10 year old Anatum Peregrine falcon acquired in the Spring of 2018. Cairo previously belonged to a civilian falconer who hunted with her. Unfortunately, Cairo developed a heart condition and is no longer able to stand the stress of flying. Despite her condition, Cairo’s sweet disposition has helped her transition into a new role as an excellent presentation bird, vital in educating the public about her species and the Academy’s program. 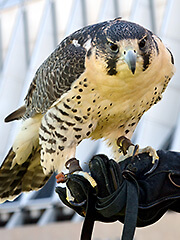 Karena is another one of the Air Force Academy’s performing mascots that you can witness during halftime at Academy home football games. She was hatched at the Academy in 2014- only days before graduation as the Air Force Thunderbirds practiced overhead. Karena is a Gyr-Peregrine hybrid who is known for her aggressive personality. This hybrid of falcon species combines the Gyrfalcon’s large size with the speed of the peregrine. Gryfalcons primarily hunt other birds, but will occasionally take mammals if the need arises. Comparatively, peregrine falcons almost exclusively hunt medium-sized birds like pigeons. 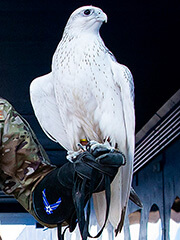 We are excited to announce Nova, our newest member of the falconry team. She is a full white-phase Gyrfalcon which is the largest of the falcon species. Females are, in fact, 1/3 larger than males, so she could be one of the largest falcons you will ever see. We look forward to seeing her show off her abilities in the coming years. 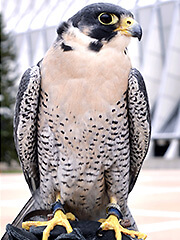 Oblio is a fifteen year old tundra peregrine falcon used for presentations. Oblio came to us at seven years old after a civilian falconer could no longer hunt with him. Oblio contracted a disease that eroded his nose cones, which are an anatomical feature within the falcon’s nostril that brings air into the lungs while flying at high speeds. These are a vital adaptation as peregrines are the fastest animal in the world, able to reach a recorded 250 mph in a downward dive. Without these nose cones Oblio is not able to safely fly. Instead, he now serves as an excellent ambassador for his species by educating the public about falcons and the Academy. 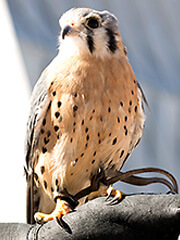 Zeus is a two year old American kestrel, the smallest species of falcon indigenous to North America. Zeus is used solely for presentations, he is not used to perform at Academy football games because of his small size and stature. While he isn’t quite large or strong enough to put on a show in the stadium, Zeus works to help educate the public about the Academy’s mission. Kestrels are widely prevalent in the United States, and while they can survive on a diet of insects, they have been known to hunt other small birds as well. 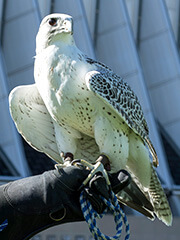 Ziva came to the Academy in 2014 when she was just a few weeks old. She is now a trained flying performer and takes to the air for falconry demonstrations at halftime of Air Force Academy home football games. Ziva is a hybrid Gyr-Saker falcon, known for her free spirit and friendly demeanor. The blend of these species combines the size and power of the Gyrfalcon with the tenacity of the saker falcon. Gyrfalcons can be found in Alaska, Canada, and the extreme north continental United States, while Sakers are a Middle-Eastern bird known for their trainability. With this combination Ziva has intimidating size and an equally impressive flying technique!