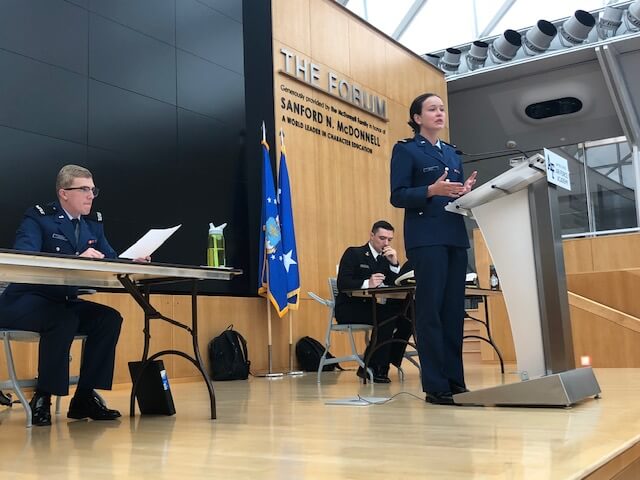 Cadets 4th Class Piper Gray and Shane Lindsey of the Academy’s Forensics Team won the debate challenge against two junior-year midshipmen to earn the top slot at the competition.

“I knew we put up a good fight, but I really didn’t think it would be possible to beat a team with so much experience,” Lindsay said. “When [the competition judges] said ‘we won,’ I just had this huge sense of pride shoot through me.”

Forensics is a debate contest between individuals or teams. The Saturday event marked Gray’s first official competitive debate. She said she was more than a bit surprised when the Air Force win was made official.

“My first thought was no way,” she said. “I don’t know much about forensics as I just started, but preparation is the key.”

Lindsay said the competition was fierce.

“The debate was pretty close,” he said. “Navy came out with some really great points that we didn’t address very well so even though all the judges voted for us, it was a far from a perfect showing.”

Capt. Ashley Christ, assistant officer-in-charge of forensics, said a judges’ panel selects the winning team based on their rhetorical skills and ability to influence the audience of the strength of their argument.

“The judges look for the strength of the arguments and how each team addresses the counterarguments made against then,” she said. “Not only did our freshmen cadets beat Navy’s junior-year cadets, we compete in a debate format that changes topics multiple times in one competition. Navy competes in a format where they research one topic all season.”

Christ said it’s rare for freshmen cadets to be pitted against their more-senior counterparts, but the Forensics Team had more competitions to content with.

In all, 84 college forensics teams traveled to San Diego to compete in forensics competitions at Palomar College and San Diego State University.

Gilchrist took second place in the impromptu speaking event and earned the highest record among competitors in the individual and debate tournaments.