Skip to the main content
Department of English & Fine Arts

Housed in the U.S. Air Force Academy’s Department of English and Fine Arts, and competing as a Dean of the Faculty’s team, the USAFA Forensics program is an inter-collegiate activity focused on providing advanced leadership, critical thinking and communication opportunities for cadets. The team also provides a nationally competitive opportunity for cadets to excel and contributes to positive human relations as well as outreach between the Academy and civilian institutions.

The Forensics Team was founded in 1955 and has enjoyed a rich history of success. Two of the first three graduates to pin on Brigadier General were U.S. Air Force Academy debaters, as well as the only graduate ever elected to Congress and several Academy Rhodes Scholars.

The team competes in 14 events, from debate to drama, and is consistently ranked among the top schools in the nation.

Forensics Team in the News 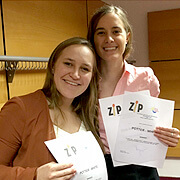 Two senior cadets have made a name for themselves and the Air Force Academy on the global forensics competition circuit.

Air Force Cadets 1st Class Samantha Potter and Ciera White have debated against students at Harvard and Stanford, the universities of Oxford and Cape Town, the London School of Economics and Political Science, and others in the last year. more… 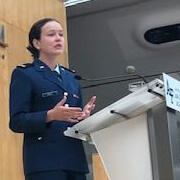 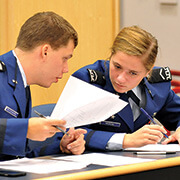 Cadets 4th Class Piper Gray and Shane Lindsey of the Academy’s Forensics Team won the debate challenge against two junior-year midshipmen to earn the top slot at the competition. more…