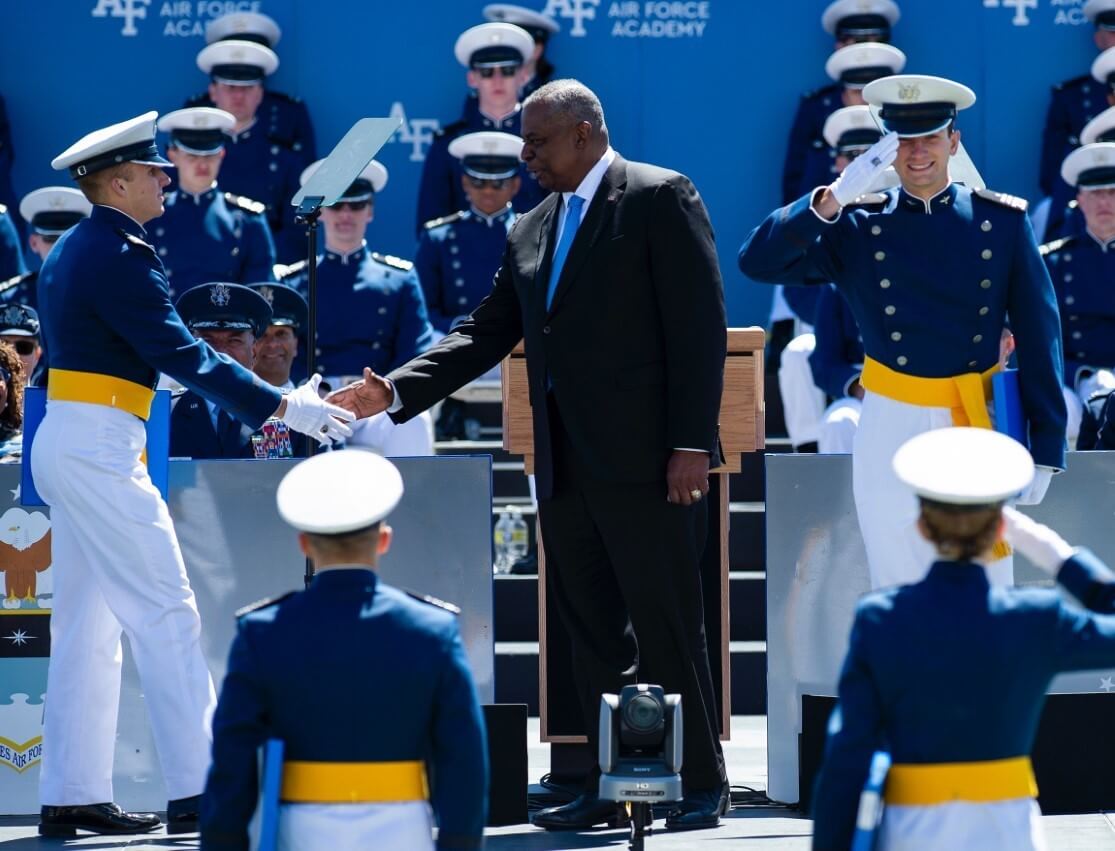 Secretary of Defense Lloyd Austin III shakes hands with graduates in the U.S. Air Force Academy’s Class of 2022 May 25, 2022. Austin was the commencement speaker for the graduation ceremony. (U.S. Air Force photo)

Austin gave the commencement speech for the Class of 2022 at the school’s graduation ceremony in Falcon Stadium, speaking to 973 graduates, faculty, staff and thousands of friends and relatives.

The Secretary of Defense encouraged the graduates to promote democracy, provide for the security of the U.S. and strive for innovation throughout their military careers.

“Innovation is the ballgame of the 21st century and countries either lead or get left behind,” he said. “As the Defense Department weaves together our concepts and capabilities in new and networked ways, we’re going to call on you.”

Austin said the Class of 2022 serves in an era of complex geopolitical movements but proved its dedication by overcoming the Academy’s academic, military and physical challenges during the coronavirus pandemic and other tests and trials.

“In just four years, you’ve seen more changes than many see in a lifetime,” he said. “A pandemic reminded us that some of this century’s biggest threats don’t even notice borders. America’s longest war – one that spanned nearly all of your lifetimes – came to an end and Russia’s cruel and unprovoked invasion of Ukraine dragged Europe into the largest security crisis since World War II.

“Graduating from this Academy is hard enough without a global pandemic, and graduating after years clouded by COVID shows serious courage and behavior,” Austin said. “But what counts is how you respond to hard times and I’m told that during lockdown you kept this wing flying and insisted on taking care of each other. Your class motto is ‘strength through sacrifice’ and during a once-in-a-generation pandemic, that’s exactly what you showed.”

Specifically referring to Russia, the Secretary of Defense said “America’s adversaries are testing the values cadets have sworn to defend.”

“Putin’s war of choice is an affront to the rules-based international order and a challenge to free people everywhere,” he said. “The world has been inspired by the bravery of the Ukrainian people and I know you have as well.”

Frank Kendall, Secretary of the Air Force, spoke at the ceremony before Austin, calling Russia an “acute threat” and China a “strategic, well-resourced threat.”

“You are graduating during an inflection point in our history,” he said.

Austin said the Class of 2022 has a direct role in promoting the international partnerships and teamwork that can quell threats from hostile nations. These partnerships, he said, “are central to our strength.”

“The power of partnerships helped us rush aid to let Ukraine defend itself,” he said. “In the Indo-Pacific, it’s helping us counter aggressive behavior from the People’s Republic of China, which our new National Defense Strategy calls the ‘pacing challenge’ for the U.S. military. You’ll see the power of teamwork as Airmen, Guardians and warfighters.”

Austin said he expects the graduates to be positive examples to all they come across during their military careers.

“You don’t get bogged down in ugliness or division,” he said. “You’re always chasing new horizons. You move faster, see further and fly higher. All of you have answered your country’s call with courage and commitment, with tenacity and teamwork, and with strength and sacrifice. With outstanding young leaders like the Class of 2022, the future of our country is bright.”