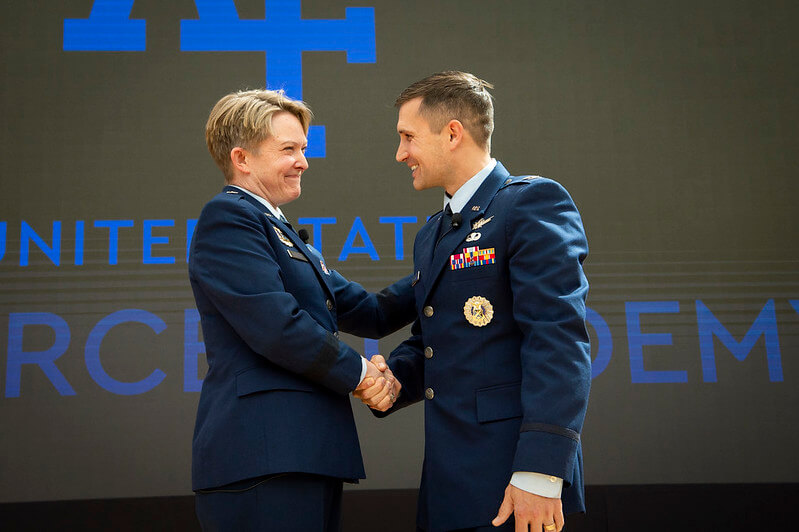 Brig. Gen. Linell Letendre, dean of the faculty at the U.S. Air Force Academy, congratulates Col. Luke Sauter, head of the school’s head astronautics department, on his transfer to the Space Force, April 29, 2022. Sauter is now the first Guardian to be a permanent professor at the Academy. (U.S. Air Force photo/Joshua Armstrong)

U.S. AIR FORCE ACADEMY, Colo. – A leading space expert at the U.S. Air Force Academy was sworn into the Space Force April 29, making him the first Space Force officer to be a permanent professor at the school.

“It has been an incredible point of pride for our entire astronautics department to play a role in developing space-focused officers for decades here at the academy,” Sauter said earlier in the week. “It is certainly a historic day to have our first Space Force permanent professor assigned. I hope there will be many more to follow.”

Brig. Gen. Linell Letendre, the school’s dean of faculty, said the move increases awareness of the Space Force, it’s partnership with the Academy and gives cadets a senior role model.

“It’s important our cadets see Guardians across our academy and that they have the opportunity to speak with Colonel Sauter and other leaders about the Space Force as they consider which branch of military service they would like to join,” she said.

Moments after swapping out his Air Force lapel pin for a Space Force pin at the ceremony, the new Guardian colonel told the audience that the burgeoning Space Force is needed and necessary to ensure national security, describing space as a “vast area of responsibility.”

“The true scale of the Space Force’s area of responsibility is unfathomable and unfortunately so are the threats in that domain,” he said. “But, space also offers abundant rewards, and we must prepare cadets for future conflict in any domain.”