Academy celebrates the legacy of the Tuskegee Airmen

Tuskegee Airmen and their family members pose for a photograph with cadets and senior officials at the U.S. Air Force Academy during the school’s annual Tuskegee Airmen Commemoration on April 29, 2022.

The all-Black combat pilots and support staff assigned to the Army Air Corps’ 332nd Fighter Group at Moton Field and Tuskegee Army Airfield in Alabama, and the 447th Bombardment Group at Selfridge Field in Michigan, fought the AXIS Powers in World War II while combatting racism and segregation in the U.S.

Lt. Col. James Harvey III, a Tuskegee Airmen who flew 126 combat missions, visited with cadets and staff at the event, and retired Colonel and astronaut Frederick Gregory spoke at the ceremony.

“As far as I understand, the [Tuskegee] experiment was to demonstrate that they did not have the skills to fly,” he said. “Of course as we know, the experiment failed. Just look around,” Gregory said to the diverse group of Airmen and cadets at the ceremony in Arnold Hall.

Gregory said that the efforts of the Tuskegee Airmen showed a commitment to a greater cause. “We wanted to fly for two dominant reasons,” he said. “To be part of the Allied Victory but also achieve victory over segregation at home.” 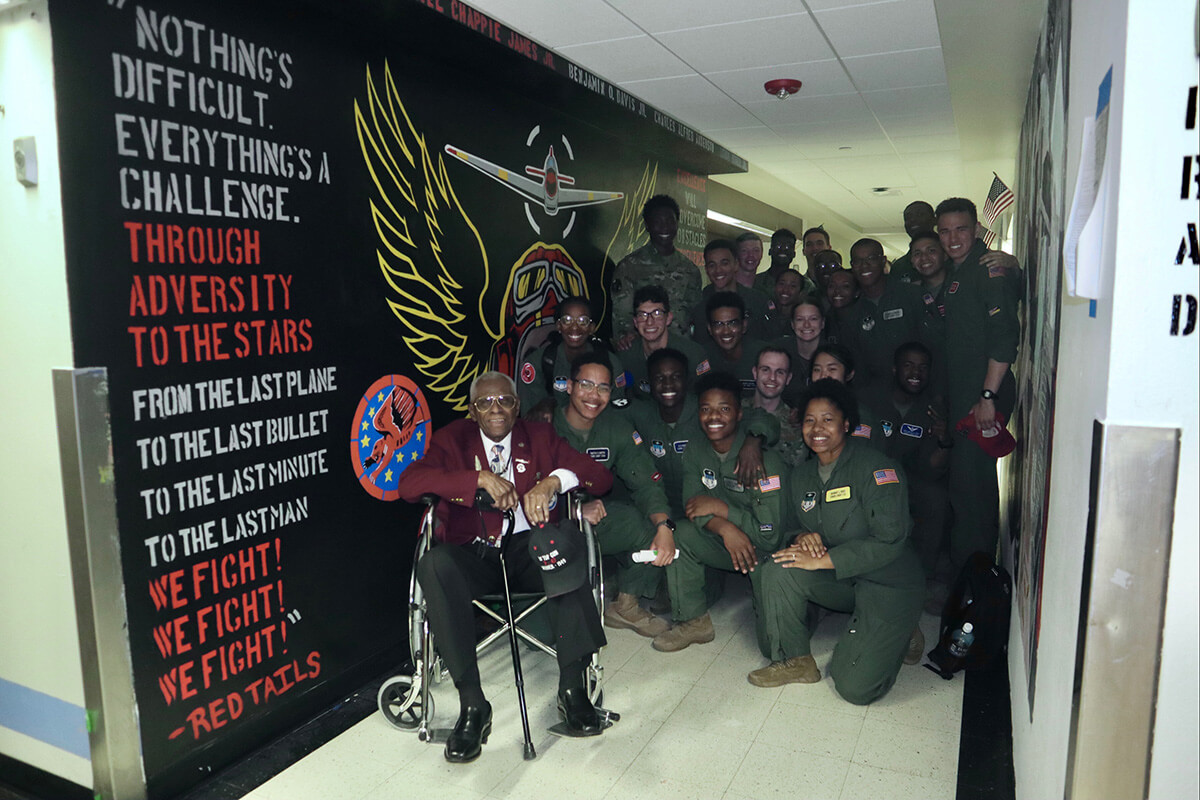 Way of Life member Cadets Elijah Beauplan and Timothy Martin escorted Harvey during his visit and said they chatted about the Top Gun competition Harvey won in 1947, a challenge the original Tuskegee Airman said his team was not expected to win.

“[Harvey] mentioned how Col. Benjamin Davis [Tuskegee Airmen commander] told them not to come back if they didn’t win,” Beauplan said. “They took that to heart and fortunately, they won the competition.”

“When I read the quote on the mural it gives me the motivation keep pushing through the challenges of everyday life and the Academy, while striving to perform to the best of my ability,” Martin said. “It also makes me optimistic about the future, as when I am an officer I will have to solve problems that don’t yet exist,”

Cadets honor the Tuskegee Airmen with a 21-gun salute and a ceremony with keynote speaker, astronaut Fred Gregory on 29 April, 2022.