U.S. AIR FORCE ACADEMY, Colo. – A meticulous renovation project to revamp the U.S. Air Force Academy’s Cadet Chapel became even more painstaking with the discovery of the extent of asbestos throughout the iconic 60 year old building.

Discovering more asbestos than originally predicted adds a new layer of complexity to the renovations that began in September 2019, but the plan to restore every facet of the building to its original state remains the same, said Lt. Gen. Richard Clark, the Academy’s superintendent.

“Whether you’re a cadet, a graduate or among the thousands of visitors each year who enter our gates, we know the place this amazing building has in the hearts of many who support our Academy,” Clark said. “We’re disappointed too. We’re disappointed we can’t open the chapel doors as soon as we originally thought, but in the end, we’re doing the right work at the right time for the right reason: preserving this national historic landmark for generations of cadets, graduates and Americans.”

Carlos Cruz-Gonzalez, the Academy’s director of logistics, engineering and force protection, and Duane Boyle, the Academy’s architect, knew renovating the chapel from top to bottom after decades of temporary repairs would be a singularly extensive undertaking, but the amount of asbestos comes as an added challenge requiring deliberate mitigation costing an additional $60 million. Before the project, chronic leakage problems degraded the structure built in 1962 and efforts to fix these leaks relied on sealants that no longer attach to the building’s aluminum siding.

“This is a historic project, the only one of its type in the world, let alone the Air Force,” Cruz-Gonzalez said. “Original reconstruction repairs and the additional asbestos abatement are essential elements in the reconstruction and preservation of this Colorado landmark.”

Today, the chapel is hidden from view by a monolithic white box, or “cocoon,” allowing work to continue despite the Front Range’s often-demanding weather. Cruz-Gonzalez expects the chapel to open to the public in 2027, remaining under the 150-foot high “box” for another five years.

“Full repairs are predicted to be complete by 2026 but everything will have to be moved back into the chapel and that’s another project unto itself,” Boyle said. “The chapel won’t be ready for public events until 2027.”

When reconstruction began, the Academy worked with the Air Force Civil Engineering Center and the Air Force Installation and Mission Support Center, both in San Antonio, to find funds for the $158 million project. The AFCEC awarded the contract in July 2019 and renovations, starting in October 2019, included completely replacing the building’s aluminum siding, stiffening the steel upper structure, installing a new water barrier, removing and cleaning the building’s original 24,000 pieces of stained glass and restoring the pews and the chapel’s two enormous organs to their original state. The AFCEC manages repair of the 52,000 square-foot building, including the 17 steel spires.

“Any existing broken glass will need to be repaired and if a piece of glass cannot be repaired, it will be replaced with an approved matching piece,” said JD Buchholtz, AFCEC project manager, in an August 2020 report.

Boyle called the scope of the project “gigantic.”

“Every piece of aluminum, replacing the dolls [stained glass pieces], organs, pews – everything is being renovated,” he said. “While the true extent of the asbestos put a wrinkle in our plan, our intent is the same today when the project began: to completely restore the chapel.”

Work continues under the “cocoon,” with the guts of the chapel removed and reduced to a scaffold-covered skeleton.

“I can’t say enough to thank our civic partners for their support of this project, or to Air Force and Academy staff, planners and contractors seeing this monumental project through to the end,” Clark said. “By taking the time to accomplish this deliberate and thorough renovation, we’re ensuring the chapel continues to remain the most visited manmade facility in the state of Colorado.” 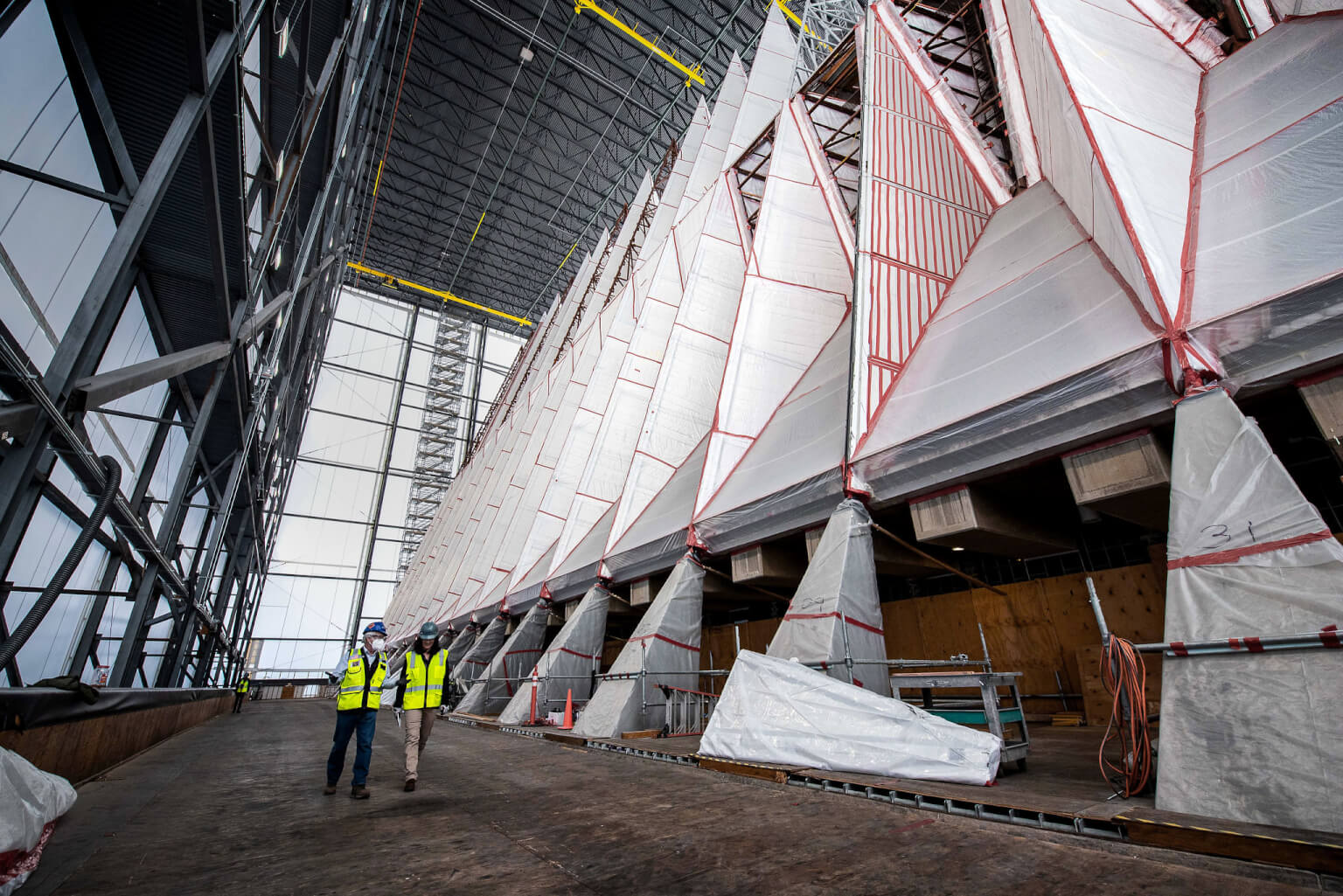 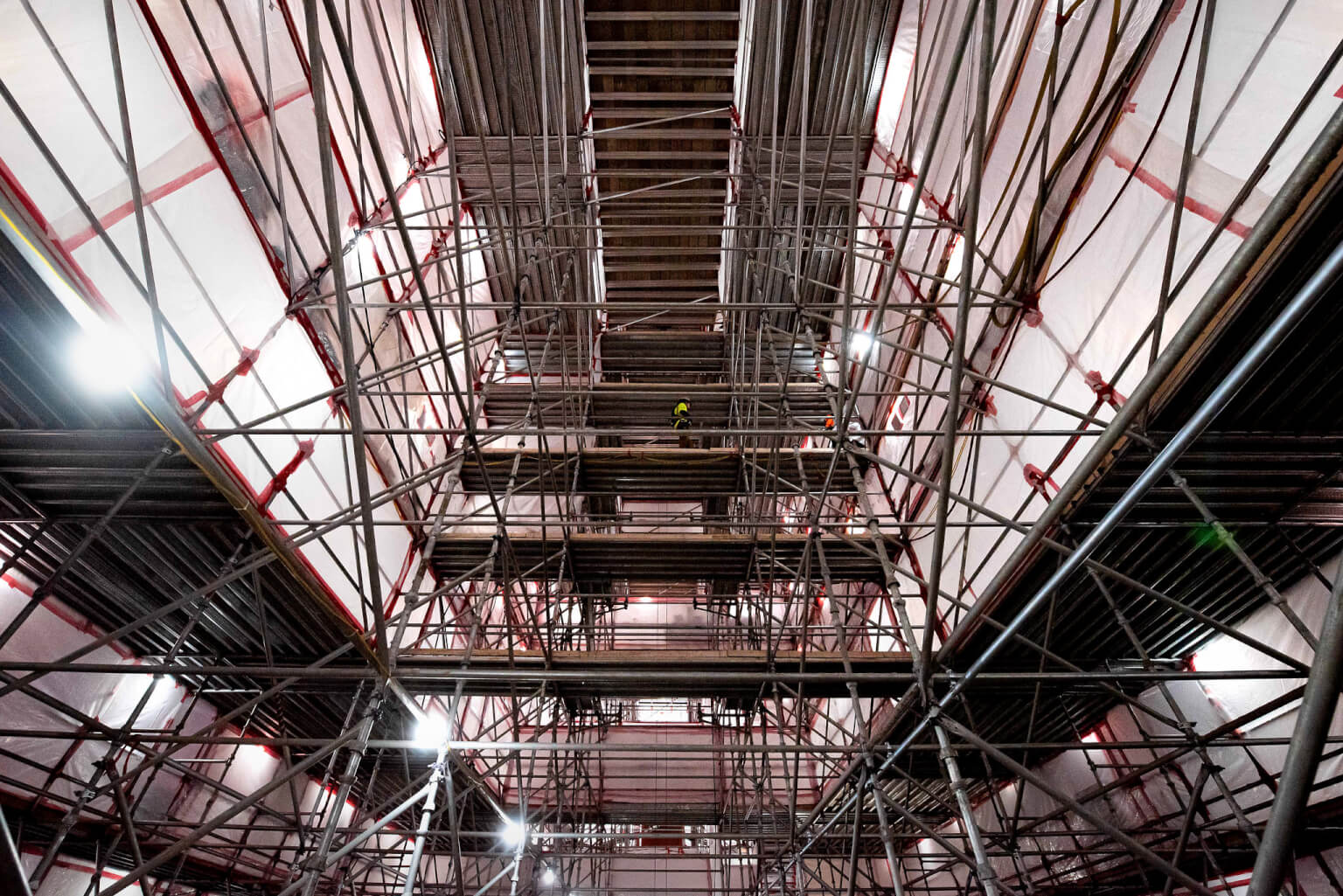