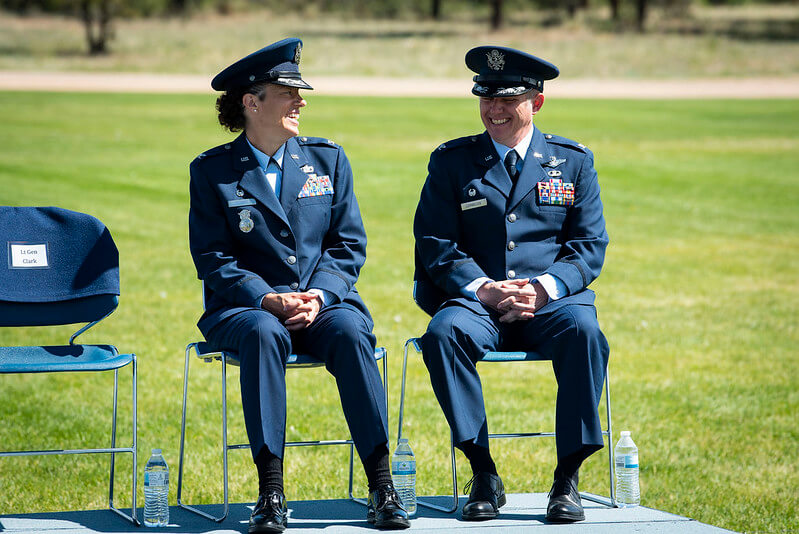 From right: Col. Michael Cornelius, commander of the U.S. Air Force Academy Preparatory school, shares a moment with Col. Melissa Youderian before the official change of command ceremony which saw leadership of the Prep School transfer from Youderian to Cornelius, June 24, 2022.

Col. Michael Cornelius takes over the duties of the Prep School’s top officer from Col. Melissa Youderian, who moves over to the Academy’s behavioral sciences and leadership department to teach cadets the leadership 200 course.

“I’m extremely humbled by the opportunity to command,” Cornelius told the crowd during the official change of command ceremony at the Prep School’s parade field. “Let’s hit the ground running and take the Prep School, cadet candidates and ourselves to the next level.”

Cornelius, a 1996 graduate of the Prep School and a 2000 graduate of the Academy, went on to serve as the deputy director of U.S. Special Operations Command-Europe’s Joint Integration Coordination Cell at Ramstein Air Base, Germany – his last assignment before reporting to the Academy.

“This is an organization dedicated to improving the integration of diverse forces in the battle space,” said Lt. Gen. Richard Clark, the Academy’s superintendent. “He worked with special operations and conventional forces to ensure mission effectiveness while capitalizing on the unique strengths of each. The Prep School ultimately has the same mission – take a group of students with a wide range of backgrounds and life experiences and help them work together toward a common goal: earn an appointment to the U.S. Air Force Academy.”

“She rose above it all and is a warrior in every sense of the word,” Clark said. “She, more than anyone, exemplified the motto of the Prep School: “Husky Strong.”

The Prep School opened for business in 1961 to offer a select group of enlisted personnel and civilians a pathway to join the Cadet Wing at the Academy.