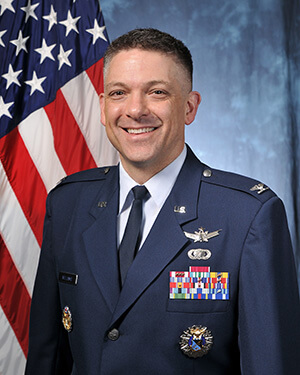 Colonel Scott E. Williams is the Vice Dean of the Faculty and the Permanent Professor of Mathematical Sciences at the United States Air Force Academy, Colorado. He assists the Dean in commanding the 750-member Dean of Faculty mission element, overseeing the annual design and instruction of more than 500 undergraduate courses for 4,200 cadets across 32 academic disciplines, directing the operation of five support staff agencies, and managing faculty resources involving more than $350 million.

Prior to this position, Colonel Williams was Head of the Department of Mathematical Sciences and Chair of the Basic Sciences Division at the Academy. As the former, he led 48 faculty and staff delivering a world-class undergraduate mathematics education while administering the mathematics major and co-administered the operations research and data science majors. As the latter, he represented the departments of Biology, Chemistry, Mathematics, and Physics with 120 faculty responsible for four disciplinary and three interdisciplinary majors.

Colonel Williams was commissioned in 1991 as an ROTC graduate of the Massachusetts Institute of Technology with a Bachelor of Science in Mathematics. He also holds Master’s and Doctoral degrees in Applied Mathematics from North Carolina State University and is a distinguished graduate of the United States Naval War College. As an Air Force Operations Research Analyst, Colonel Williams has performed in a variety of roles across acquisition, operational and MAJCOM staff, and academia. He also served in deputy group command, deployed as an advisor to the fledgling National Military Academy of Afghanistan, and led Misawa Air Base disaster response, recovery, and evacuation efforts during Operations Tomodachi and Pacific Passage. Colonel Williams is a seven-year member of the Scientist (61X) Development Team. Prior to his current tour at the Air Force Academy, Colonel Williams was the Air Force Chief Analyst on the Air Staff at the Pentagon.

Colonel Williams is married to the former Tara Joy Lipton of Blaine, Washington. Together, they have five children: Madison, Bailey, Travis, Delaney, and Qin.