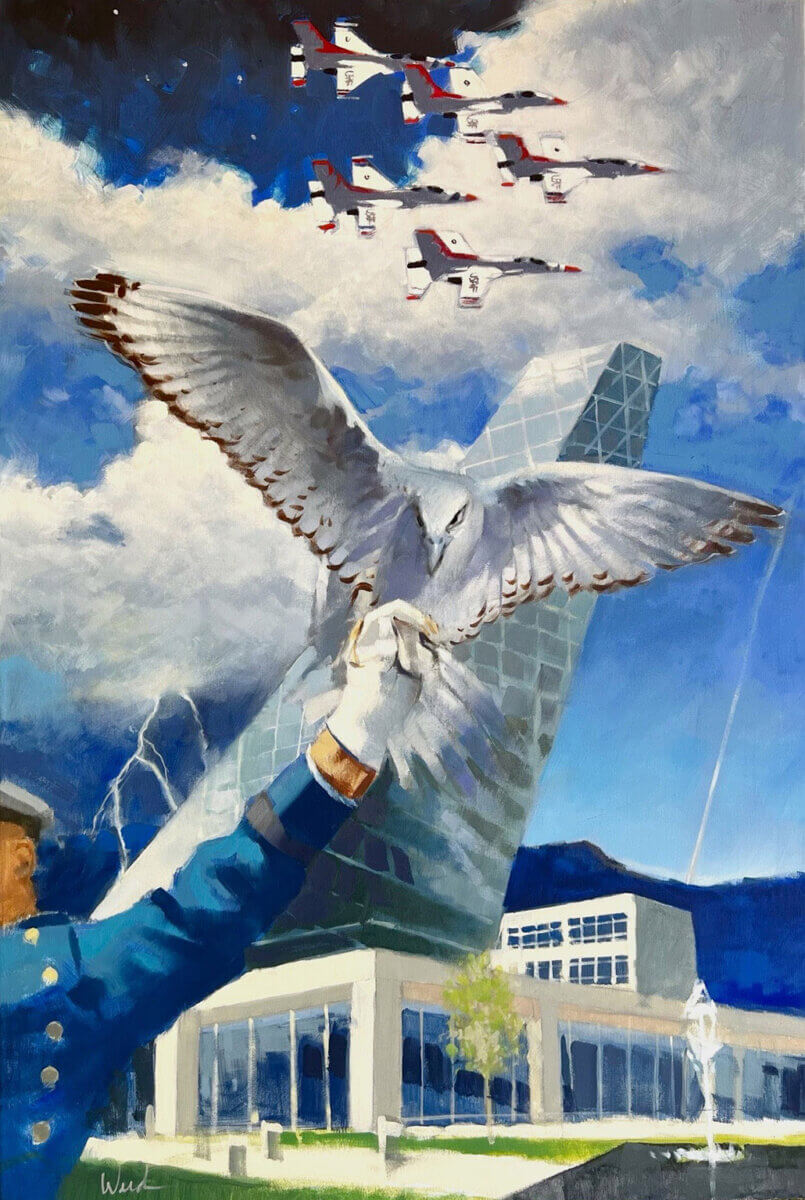 The U.S. Air Force Academy Class of 2023 official painting contains six elements that represent life as an academy cadet.
The painting was created by Colorado artist Steve Weed after he won a public call for artists. (Courtesy photo)

“I included the lightning bolt to represent the Air Force’s global responsiveness and Academy athletics. Since this class will never see the inside of the chapel, I included Polaris Hall to represent the Academy’s mission to develop leaders of character,” said Weed. “I worked with the cadets to ensure the elements held a personal meaning to their common experience and time at the Academy.”

Class paintings have been a tradition at the Academy since the 1970s. However, this is the first time the cadet class has taken an active role in seeking and securing an artist.

The new process allows the class to retain the piece’s copyright and set affordable prices on prints for parents and classmates interested in purchasing a copy of the painting.

“This approach allows the class more autonomy in securing the kind of piece they want to reflect their unique Academy experience and it strengthens the Academy’s outreach mission by building bridges into the community outside our gates,” said Michael Peterson, Academy strategic communications outreach division chief.

“The process to choose next year’s painting will most likely be similar but with a broader reach,” said Thomas. “I believe the class painting and the call for artists bring attention to the Academy and local and regional artists, creating a bond with the arts community.”

Three-time winner of the Gazette’s readers’ poll, “Best Artist for Colorado Springs,” Steve Weed, is also a master illustrator and painter who specializes in portraits and landscapes.

“It was critical to all involved that Mr. Weed created a piece of art that was fresh and enjoyable to cadets and non-cadets alike,” said Cadet 1st Class Usama Bamieh, Cadet Class of 2023 president, “We understand that the cadet experience is only made possible by a community of support. We wanted to make sure we included them in the process.”

Visit the painting’s webpage to learn more about the 2023 official painting.