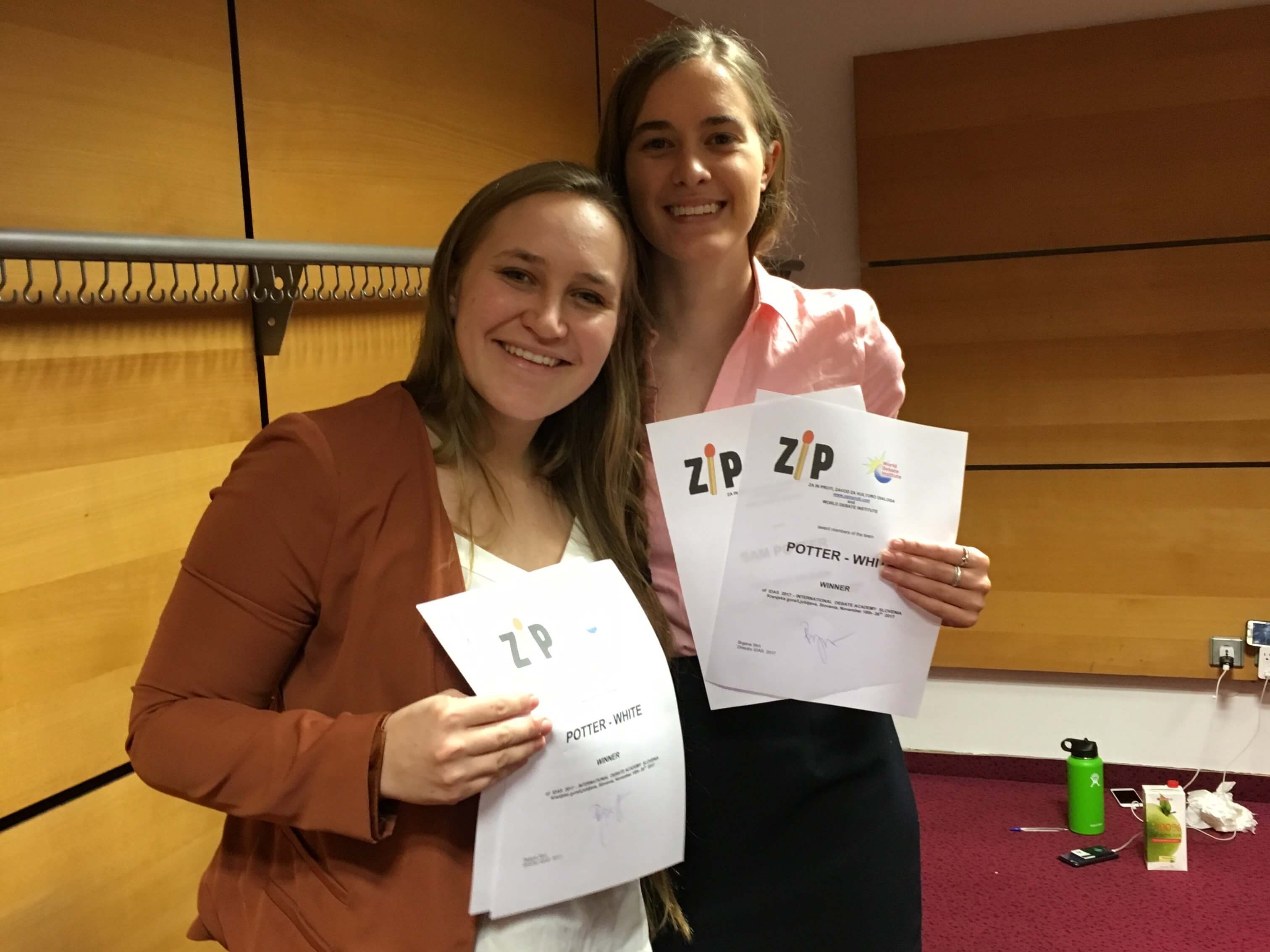 U.S. AIR FORCE ACADEMY, Colo. — Two senior cadets have made a name for themselves and the Air Force Academy on the global forensics competition circuit.

Air Force Cadets 1st Class Samantha Potter and Ciera White have debated against students at Harvard and Stanford, the universities of Oxford and Cape Town, the London School of Economics and Political Science, and others in the last year.

“Forensics is not about dead bodies — it’s a debate program,” White said. “We compete against some of the best teams in the U.S. and the world.”

The Academy’s Forensics program is an inter-collegiate activity providing advanced leadership, critical thinking and communication opportunities for cadets, according to team’s website. It provides a nationally competitive opportunity for cadets to excel and contributes to positive human relations and outreach between the Academy and civilian institutions.

As freshmen, Potter and White ranked third in the National Parliamentary Debate Association. Since then, they’ve placed at least on the semi-finalists list at 12 major forensics competitions, and with the rest of the team have placed high in regional competitions and earned an international first-place title.

Their achievements as a debate team tend to grab extra notice on the forensics circuit because roughly 75 percent of all NPDA competitors are men.

“It’s not uncommon to be the only women’s team in a finals round,” White said.

Potter said she and White are not concerned about this gender ratio.

“We’ve learned to work that much harder to come up with better arguments where stereotypes or biases will not prevent us from winning,” she said.

Potter is an English and law major from Martha’s Vineyard, Massachusetts. She applied to the Academy to play tennis, she said, but her desire to become a lawyer drew her to forensics.

“I find a passion in arguing and defending others and found the forensics team to be a perfect avenue to hone my advocacy skills,” she said. “Debate pushes me in numerous ways another sport wouldn’t have. It forces me to think critically and consider multiple perspectives.”

White, a political science major from Smithfield, Utah, competed in forensics in high school and joined the Academy’s Forensics Club during her freshman year.

“Forensics has been the single most impactful program I have participated in at the Academy,” she said. “The Academy has so many fantastic programs, clubs and teams. I’m biased, but I would say forensics is the best program at the Academy.”

Potter said she and White share a “great dynamic.”

“We’re never afraid to say ‘no.’” she said. “If I think she is missing the point of the debate or vice versa, we say ‘no.’ No hard feelings.”

“I’m grateful for the opportunities I’ve had to travel and debate with her,” she said.

Potter and White also said they’re grateful for the faculty members who helped them get to the top of the debate charts.

“Dr. Gina Iberri-Shea [English professor and forensics coach] and the English department, our sponsor department, have provided me with so many opportunities to do amazing things,” White said. “Forensics helps me with public speaking, confidence and leadership.”

Forensics is not just an academic experience, Potter said.

“It has helped me think critically,” she said. “I have no anxiety about public speaking.”

The Academy’s Forensics program was founded in 1955 and competes in 14 events, including debate and drama.