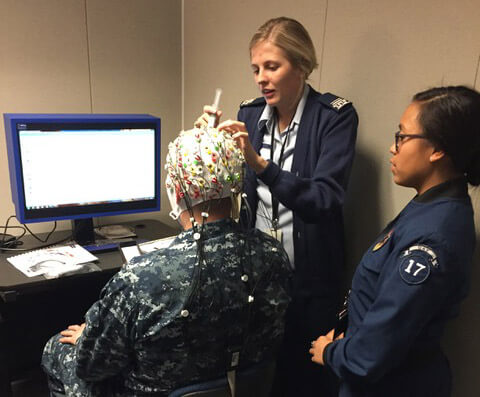 Cadets set up an EEG to monitor brain activity as part of concussion research at the U.S. Air Force Academy, 2017.

U.S. AIR FORCE ACADEMY, Colo. – A behavioral science professor at the U.S. Air Force Academy is garnering international attention for his concussion research. Dr. Christopher D’Lauro’s study about underrepresentation of women in concussion research was published in the British Journal of Sports Medicine and cited in a Washington Post article.

Next month D’Lauro will attend the 6th International Consensus Conference on Concussion in Sport. There experts will use the most current research to update protocols to diagnose and treat athletes with suspected concussions. He hopes to advance the representation of women in research so their unique needs are not overlooked when experts update the protocol every couple of years.

This is not his first study on the topic. D’Lauro launched his initial concussion research project shortly after he started teaching here in 2011, first focusing on the underreporting of concussions. D’Lauro says the Academy is ideal for this research because the military and athletic training requirements for 4,000 cadets provides a diverse pool of cases to study. Additionally, the curriculum allows him to tap into the cadets’ academic interests and abilities and include them on the research team. 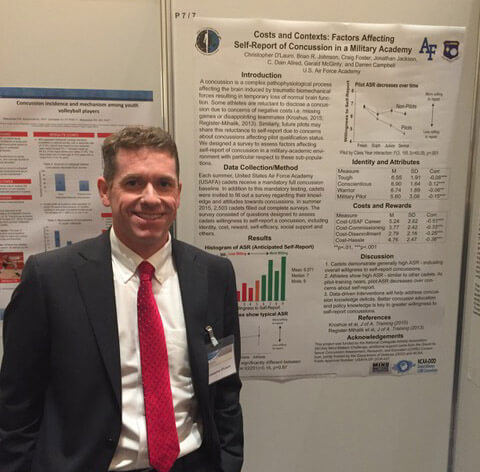 “We provide a unique opportunity for cadets to do meaningful research, connect with outside experts and get involved in issues related to their future goals,” said D’Lauro.

Second Lt. Lily M.C. Swope, Class of 2020, said working with D’Lauro on this research and participating in bacteria-related research at the Centers of Disease Control and Prevention during the Cadet Summer Research Program have proven helpful in her medical studies.  She is a third-year medical student at Uniformed Services University of the Health Sciences.

“The project required me to look at research in a different way, with a critical eye on the significance and meaning of research,” said Swope.

While cadets flex their academic muscle on these research projects, the results impact their lives outside the classroom. For example, the results have led to changes that are reducing the number of concussions suffered during Basic Cadet Training.

“The 10th Medical Group used our team’s findings to make small changes to BCT, such as spreading cadets out more during challenge courses, and that reduced concussions from 20 to 30 previously to three or four reported this summer,” said D’Lauro

The studies also impact cadets’ recovery from concussions with the introduction of the Return to Learn program.   Through this program, D’Lauro works with collaborators in the cadet clinic and athletics to give cadets leeway in completing small class assignments allowing their brains to rest and recover from a concussion.  Its success here has led other service academies and universities to adopt the program.

Appropriate recovery protocol is also crucial because of the mandatory military and athletic training at the Academy.  Statistics show that someone is 33% more likely to experience a lower body injury 90 days following a concussion, due to its impact on motor skills and coordinating complex movements. With proper post-concussion care, those additional injuries can be minimized.

That impact of the concussion research hits close to home for Swope, who was a gymnast at the Academy.

“It really can make a difference for people like me,” she said. “It should also be an eye-opener for everyone in the field to realize that there are areas missing in terms of women in medical research, not just concussions, but musculoskeletal injuries and recovery therapies.”

It is the protocol improvements and the enthusiasm of cadets that keeps D’Lauro excited to recruit more collaborators and cadets to continue research that is meaningful both in and out of the classroom.