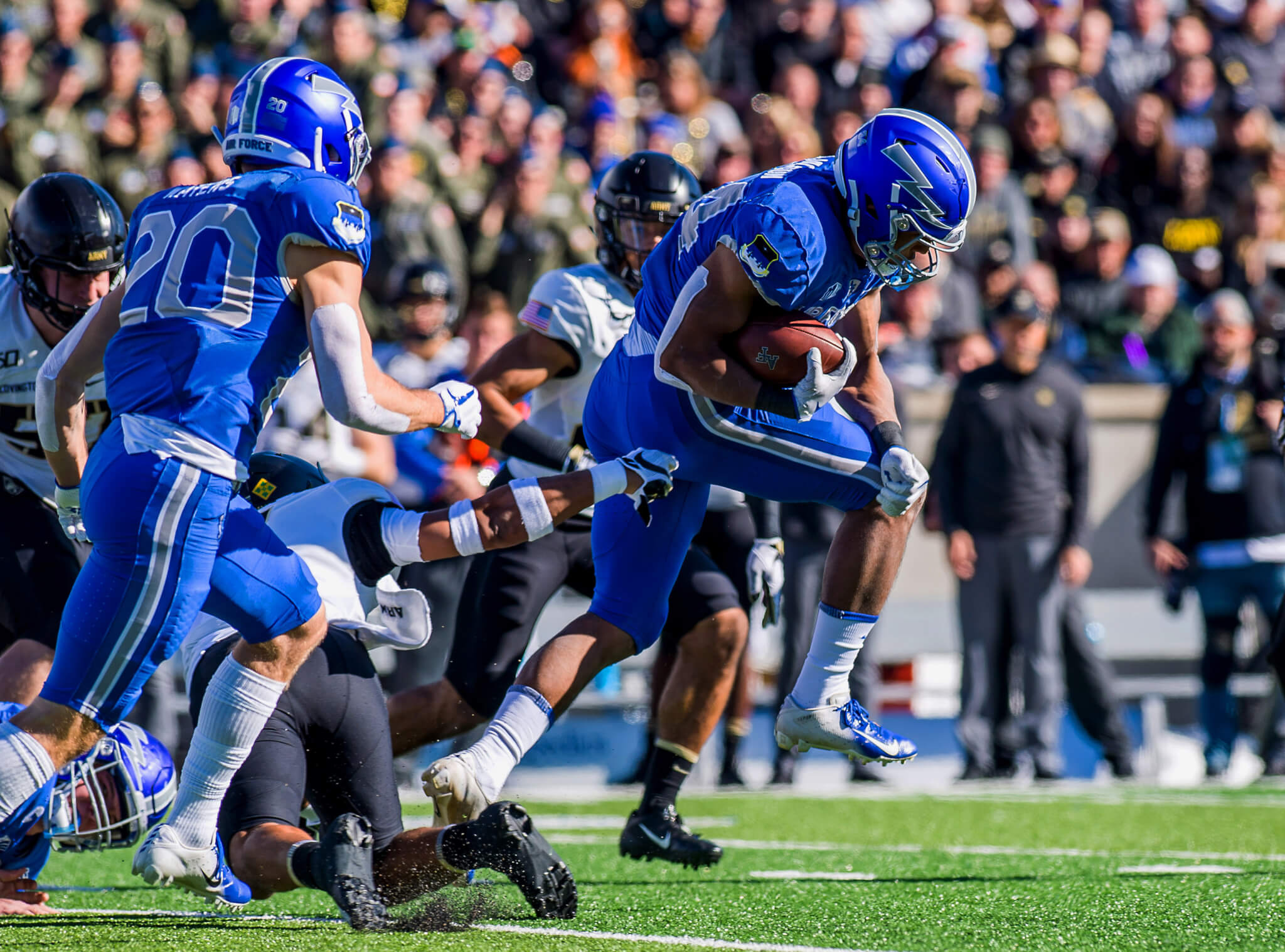 Both teams went nearly blow-for-blow all game, as the Falcons finished with a one yard advantage in total offense, 344-343. The Falcons controlled the ground game, rushing for 328 to Army’s 129. AF was also a perfect 3-for-3 in the red zone, while the Black Knights were 1-for-3.

Leading the offense once again was sophomore fullback Timothy Jackson, as he completed his fourth-straight 100-plus yard game, finishing with a new career-best 155 on 20 carries and a score. He is the first fullback in program history to have four consecutive 100+ yard rushing efforts.

The other touchdown was scored by junior Joshua Stoner, and he finished with 59 yards. Right behind him was classmate Kadin Remsberg, who had 54 yards on just eight carries.

On the defensive side of the ball, senior linebacker Kyle Johnson led the unit with 11 total tackles while junior Jordan Jackson had nine stops, as well as the game’s lone sack. Senior defensive back Zane Lewis also added eight tackles, seven solo, and also had a key pass breakup in the end zone on Army’s final drive.

Army started the game with the ball, and proceeded to put together a nice drive that led them to first and goal to go. From there, they had eight cracks at the end zone after an Air Force penalty, but the Black Knights were stopped at the one yard line, turning it over on downs.

On AF’s first possession, they got the ball back near midfield before being stopped, forcing a punt right before the end of the first quarter. After the first 15 minutes the game remained scoreless.

Air Force’s second drive led to points, as a 32-yard run from Jackson set up AF in the red zone. The drive stalled from there, setting up a 20-yard field goal from senior Jake Koehnke, which he drilled to break the ice. On Army’s ensuing drive, they went 65 yards in 11 plays, taking nearly seven minutes off the clock, and resulting in a one yard TD on fourth down. The extra point was no good, however, keeping it 6-3, which held into halftime.

Coming out of the half, both teams traded two possessions, as neither offense could get any traction. AF’s third drive of the half resulted in points, though, as a nine-play, 64-yard drive was capped off by a Jackson three yard rush, giving AF the lead back, 10-6, with two and a half minutes to the half.

The lead was short lived, as on the very next play from scrimmage, Army bombed a 75-yard TD pass to retake the lead, 13-10. Right before the end of the quarter, Hammond broke free for a 30-yard gain to set up the Falcons nicely into the fourth.

Four plays into the fourth quarter, Stoner capped off a nine-play, 74-yard drive with a five yard scoring plunge, giving AF its third lead of the day, 17-13, with 13 minutes to play. There was then three straight three and outs, burning five and a half minutes of clock and giving AF the ball with 8:30 to go. The Falcons then used up 5:45 more before punting the ball back with three to go.

Needing a TD to take the lead after the missed extra point earlier, Army went to work on their drive. They worked their way all the way down to the five, but Air Force’s defense was up to the task again, forcing an incomplete pass on fourth down, sealing the four point win.

Air Force gets back on the road next weekend as they head to Albuquerque to take on New Mexico. Kickoff against the Lobos is set for noon.