Updating Our Alma Mater to Celebrate All of Us 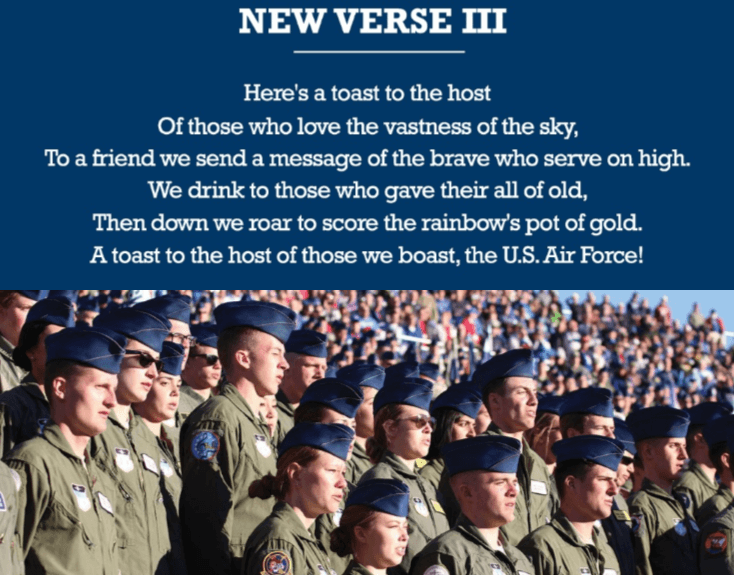 WASHINGTON D.C. — As a second-generation airman and an Air Force Academy graduate, I cherish our storied heritage and the sacrifices of all the trailblazers who made our Academy and the Air Force what they are today. As the 21st chief of staff, I am equally proud of today’s exceptional men and women who make us the greatest Air Force on the planet.

Holding dear these two unmistakable realities — our rich heritage and who we are today — underpin my decision to update the U.S. Air Force Song. I have authorized Lt. Gen. Jay Silveria ’85, USAFA superintendent, to use a new version of the third verse of the U.S. Air Force Song, our Alma Mater, that better reflects the reality of today’s force by celebrating all who have — and will — step up to serve.

Most of us can remember standing in Falcon Stadium or at Clune Arena facing West Point or Annapolis cadets following a spectacular win at 6,000 feet. Over the past two years, I have been honored to attend the women’s service academy volleyball tournament played at the Pentagon. Our team crushed the competition last year. At the end of the match, I stood with our brave women and sang our Alma Mater.

These are the women we will ask to go into combat and fight just as women have done for a generation. Yet this version of the song, their Alma Mater, was not about them. The version we all sang offered, “a toast to the host of the men we boast.” Across the court stood athletes from Annapolis, which changed its alma mater in 2004, and those from West Point, whose song changed in 2008. It is time for us to change.

Last year, a team of airmen and cadets at the Academy updated the lyrics based on bedrock principles. Our song must reflect our history, the inspiring service and accomplishments of all who’ve served, and the rich diversity that makes today’s Air Force indisputably the strongest and most capable in the world. While I’ve asked Gen. Silveria and our Air Force Academy to lead this change, we’ll also take a hard look at whether further updates may be warranted for the other verses of the song.

Valid as this rationale is, these changes will draw notice and spark debate. The Air Force song is such a powerful and enduring touchstone that has been sung at countless funerals and ceremonies. Changing it will elicit emotions and opinions.

This is why I must be clear. In making this decision, I respect the views of others who will not agree. But I also know with absolute certainty and clarity that these changes are about adding to, not subtracting from, who we are. Changing the lyrics in no way diminishes the history and accomplishments of men or dilutes our eternal gratitude for their sacrifice and bravery.

There are plenty of inspiring examples of courageous women leading us in combat and in service. Col. (Ret.) Martha McSally, Class of 1988, was the first woman in the Air Force to serve as the commander of any combat aviation squadron, to include fighters and bombers. She now serves as a U.S. senator from Arizona.

Capt. Amy Lynn Svoboda, Class of 1989, is another. Her squadron’s training officer, Svoboda was killed flying her A-10 during a night training mission. While a cadet, she was a member of the women’s volleyball team, and every year the Amy Svoboda Award is given to the player who best exemplifies selfless service.

Let me share as well the story of Maj. Adrianna M. Vorderbruggen, Class of 2002 and a highly regarded special agent with the Air Force’s Office of Special Investigations, who was killed in 2015 by a suicide bomber while stationed in Afghanistan. She was one of six airmen killed in the attack at Bagram Air Field in what was the single deadliest attack since 2013. All served with OSI or Air Force Security Forces.

This is who we are. We will never forget our history. Our song embodies our ethos and must be inclusive of all who raise their right hand and take the solemn oath to support and defend the Constitution against all enemies foreign and domestic. We freely take this oath without any mental reservation or purpose of evasion.

When I walk the sacred grounds of Arlington National Cemetery this Memorial Day as I do every year and visit the airmen killed under my command as the Combined Forces Air Component Commander in the Middle East, I will visit men and women buried side by side. Such is the nature of combat. It does not discriminate. Neither should we.

Here’s a toast to the host

Of those who love the vastness of the sky,

To a friend we send a message of the brave who serve on high.

We drink to those who gave their all of old,

Then down we roar to score the rainbow’s pot of gold.

A toast to the host of those we boast, the U.S. Air Force!