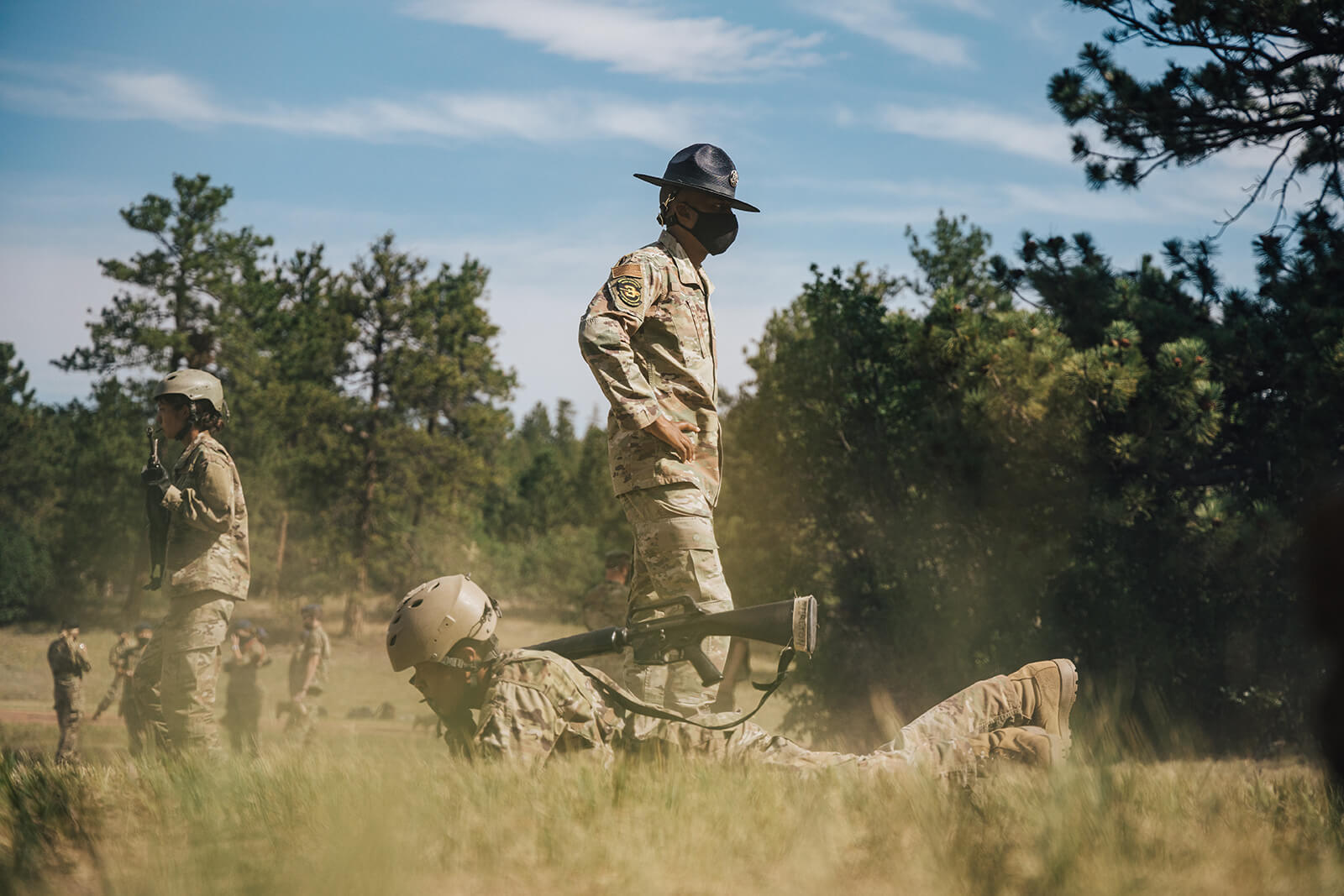 by Jeff Holmquist, Association of Graduates

When Brig. Gen. Michele Edmondson assumed the role of USAFA commandant of cadets in the summer of 2019, she arrived just in time to witness Basic Cadet Training for the incoming Class of 2023.

She appreciated some of the training techniques and tactics of upperclass cadre — handed down from one class to another for years — which contributed to what many felt was the heritage of the institution. However, with Brig. Gen. Edmondson’s steep military training background and experience, she was excited to evolve training and parallel it to what military training looks like in the operational world.

For this reason, late last year Edmondson and her team ordered a training pause to evaluate and reset the overall Cadet Wing training program with an eye toward standardizing USAFA training among upperclass cadre and ensuring that all training was purposeful and every cadet was treated with dignity and respect.

The pause, just weeks before Christmas break, eventually paved the way for the return of military training instructors (MTIs) to the Academy for the first time in more than a decade. The MTI team, made up of five experienced Air Force enlisted personnel, arrived in early 2020 to begin preparing for Basic Cadet Training for the Class of 2024 and the forthcoming academic year.

“Our MTIs have been equipped with different tools designed to achieve behavioral changes during and beyond basic military training,” Edmondson says. “They will work to pass those same methods to our BCT cadet cadre, and I am so excited to see the positive effects they will have on them and the entire cadet wing.”

According to Antonioli, the MTI team is working hard to establish training standards that achieve institutional goals and desired outcomes.

“Gen. Edmondson wants to make sure that everything we’re doing has a ‘why’ behind it,” he explains. “USAFA has been turning out good second lieutenants for years, but Gen. Edmondson didn’t want small training infractions to become big hurdles down the road. She brought in experts to help ensure that we were driving toward more objective-based training standards.”

Over the past couple years, the Academy beefed up its Academy Military Training (AMT) program to imbed two enlisted personnel per squadron. The program offers cadets valuable exposure to NCOs and their important roles in the Air Force.

The responsibilities of AMTs have expanded through the years. Their primary role is to support the squadron air officer commanding (AOC), but they also serve as mentors, day-to-day squadron supervisors and counselors to cadets.

MTIs, on the other hand, are experts in drill and ceremony, plus standardization and evaluation. Until the new MTI team showed up, those particular training responsibilities fell on a single master sergeant.

“That’s tough duty on any one person,” Antonioli says, “to execute that for all 4,000 cadets.”

With one MTI for each group in the Cadet Wing, more focus can be placed on the military discipline expected of cadets — such as drill and ceremony, dorm room standards, proper uniform wearing, personal hygiene and more.

“We won’t have the day-to-day interaction with everybody within a squadron like an AMT can,” Antonioli explains, “but we can be the group training expert.”

Aspiring MTIs who show an aptitude for teaching are selected from other career fields within the Air Force. The candidates must be released by their current career field, then attend eight weeks of classroom training. The trainers then complete 90 days of on-the-job training before becoming fully certified as an MTI.

“And then you realize that there is so much more that you have to learn,” Antonioli laughs.

Antonioli’s career journey started as a medical laboratory technician in the Air Force. After more than 11 years in that job, he transitioned to geospatial imagery.

He became an MTI in 2016 and has enjoyed the role ever since.

“It’s extremely fulfilling,” he says. “It’s a really unique opportunity that not a lot of people in the Air Force get to do. We get to watch trainees grow from that civilian who couldn’t do anything correct the day they arrived … to a really confident and committed person at the end.”

It’s been hard not to notice the handful of enlisted personnel wearing the signature “Smokey the Bear” hat providing guidance and correction throughout USAFA. The five MTIs arrived in February and March and effectively hit the ground running.

According to Antonioli, he and MSgt. Coley came directly from their MTI roles at Basic Military Training (BMT). Steinbeck, Walsh and Ivory rejoined the MTI corps after returning to their original Air Force career fields for a brief time.

Antonioli says the opportunity to be among this new group of MTIs at the Academy was impossible for him and the others to pass up.

“The Air Force has given me so much, I want to give back to it as much as I can,” he says. “I’m willing to do everything I can for them.”

Antonioli says he looks forward to mentoring and instructing cadets for two, three or perhaps four years in a row, “if the Air Force lets me stay that long.” His potential influence on individuals is considerable when compared to the eight weeks he had with enlisted personnel at BMT.

He has to laugh at himself, however, because he was recycled at BMT when he was a young recruit.

“So, trainee Antonioli was not a very good one … but now I get to use that,” he says. “Just because you’ve struggled does not mean that you can’t go on to be successful. It’s always a good lesson.”

Antonioli says BCT for the Class of 2024 progressed pretty well, despite the added challenge of having to deal with COVID-19 guidelines issued by the Centers for Disease Control.

“The feedback we’ve gotten from the upper leadership is that it went even better than they expected,” he says. “The cadre overall really rolled with it … and they implemented everything the way we expected them to. They did everything the right way and tried to treat everyone equally.”

The team hopes to implement a few training tweaks in the days ahead but was pleased with how things turned out, he says.

Brig. Gen. Edmondson says she has been very pleased with the impact the MTIs have had so far.

“Since the MTI’s arrival, I have been so impressed with how they’ve embraced their role of developing our cadets’ leadership skills and witnessing firsthand the genuine mutual respect that has been built between them and the cadets,” she says.