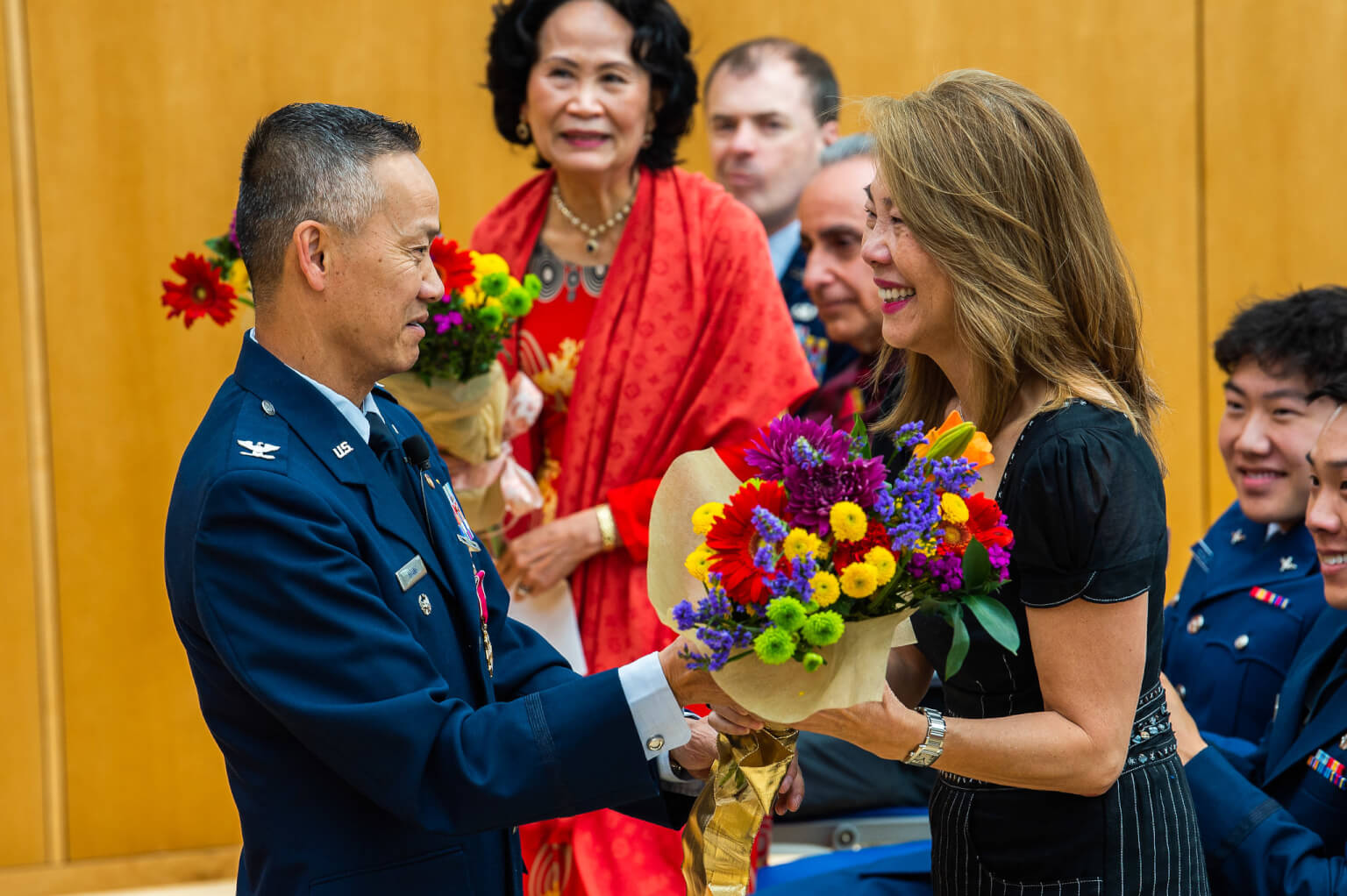 If the retirement ceremony for Col. Harold Hoang had a theme, it was gratitude: gratitude for the Air Force allowing the Oregon State University ROTC grad to have a successful career; gratitude for the support of his coworkers and Academy Superintendent Lt. Gen. Richard Clark who supported him through major upgrades to the school’s $150 million IT infrastructure; and gratitude for the country that gave Hoang’s family their freedom.

A NEW LIFE
The second half of Hoang’s life began early, when he was 7, when he woke up in the hospital bay of a Navy ship with a needle stuck into his arm, an upturned saline bag hanging over the bed. It was May 1975 and Hoang’s family – 11 in all, along with hundreds of other Vietnamese refugees, had just been rescued by the Navy after their crowded boat was spotted on the South China Sea.

Hoang spent most of his childhood in Da Nang, Vietnam’s busiest port city. His father, Kham, was a special operator in the South Vietnamese Army who worked with U.S. special forces while his mother, Siem, cared for their children. Hoang was an “adventurous, playful and respectful little boy” he said, who spent a good amount of time at his father’s military base.

“My parents taught me grit, perseverance and sacrifice for the ones you love,” he said. “Most importantly, they taught me humbleness and determination to thrive during adversity.”

This seems like an understatement when you learn what was to come for Hoang’s family, but this determination would prove valuable. Though the Vietnam War officially ended in April 1975, the Vietcong had taken control of the country.

“My father knew if we stayed we’d be dead,” Hoang said.

The family – Hoang, his parents, six siblings and two young cousins in tow – abandoned Da Nang in the “dead of night,” and boarded a ramshackle tugboat traveling south to the port city of Vung Tau near Saigon.

“My father didn’t know where we were going. We were fleeing into international waters with the hopes of being rescued by the U.S. Navy,” Hoang said. “My parents knew there would be no life for us if we stayed. We were going to live free or die. Getting on that boat and escaping Vietnam was the biggest, bravest decision my parents ever made.”

The refugees traveled west, “hoping to reach Subic Bay (Philippines)” and were at sea for a day before the Navy spotted their boat and directed them to climb aboard a barge serving as a collection point.

“My mom and dad climbed behind us, making sure my 3-year-old sister and 5-year old brother didn’t fall into the ocean as the barge swayed with the waves,” Hoang said.

Other ships arrived the following day to transport the refugees to the Philippines but that came with its own dangers.

“People pushed and shoved their way toward the ship, fighting to get rescued with some falling between the barge and the Navy ship and were never seen again,” Hoang said.

Hoang pretended to faint, hoping the corpsmen would notice the family, but after being at sea for a few days on a dangerously crowded boat with very little food or water there’s little doubt the refugees needed medical assistance.

That saline drip helped Hoang recover and his family got the food and water they needed. Within two weeks of arriving at Subic Bay, the family was transported to Andersen Air Force Base, Guam, before flying to a refugee camp in Pennsylvania. After stays in other states, the family settled outside Portland, Oregon.

When Hoang thinks about his childhood in Da Nang he remembers his oldest brother Quang, an officer in the South Vietnamese Army. “The first memory is riding on the back of his motorcycle,” he said. “The second is him picking me up and congratulating me after I won several academic awards at school. He’s been missing since 1975. He’s still listed as a prisoner of war or missing in action.

“I keep waiting for a text… an emoticon… something,” he said. “We’ll never give up hope.”

CYBER PIONEER
Hoang’s career consists of 30 years of improving Air Force technology and cyber realms, Clark said, with multiple deployments and assignments since commissioning in 1991. He arrived at the Academy in 2017 to serve as the installation’s chief information officer and manage the headquarter staff’s command, control and communications office – or “A6” – and oversee the IT systems used by thousands of staff, faculty and cadets.

“His whole career is immersed in the development of the Air Force’s cyber efforts,” Clark said at the retirement ceremony. “Harold saw the big picture, he saw what the U.S. needed regarding cyber and his efforts throughout his career led to transformation and change.”

Some of Hoang’s accomplishments during his five years at the Academy include implementing and combining the school’s communication and information systems by improving the military and educational networks used by 9,000 people, including the Academy’s 4,000 cadets. His advocacy for the Academy’s information and technology roadmap resulted in Congressional support to the tune of $9 million, Clark said.

“He was a cyber pioneer,” the superintendent said. “His work improved Department of the Air Force research and our recruiting and admission capabilities, powering us as a digital university. He’s made the Air Force better and he’s made us better as an institution.”

Hoang thanked Clark for allowing him to “build a team of professionals dedicated to the mission and cadets.

“I’m very privileged to have been part of the Academy’s ‘Team 6,’” he said.

GRATITUDE
At his retirement ceremony, Hoang was humorous and emotional when describing the efforts his parents took to provide their children with better lives, which included forming a janitorial business and his father working at a turkey processing plant.

“He rode his bike to work every day through every kind of weather including snow,” Hoang said.  “Sometimes they had three jobs but made sure all of us went to college. I cannot express my gratitude enough for my mom and dad. I have no words.”

He extended his appreciation to his full family, including his wife, Tutu, who he called his “soulmate.”

“I was able to focus on my assigned duties because of her support,” he said. “She understood I wore the uniform and when duty called, I had to answer. Tutu is beyond super,” he told the audience. “She singlehandedly raised Kegan and Cyrus into the young men they are today.”

With retirement, Hoang and Tutu will keep their home near Falcon.

“Our kids grew up in Colorado Springs and Falcon and we like the community,” he said. “The home we have is perfect for us.”

The Air Force is “in good hands” when it comes to today’s generation of cadets, Hoang said.

“They’re kids at heart who want to be a part of something bigger than themselves,” he said. “

The retired colonel hopes any cadet who reads his story understands they “live in a country where opportunity exists everywhere,” he said.

“This willing to make the most of it will reap the rewards,” he said.