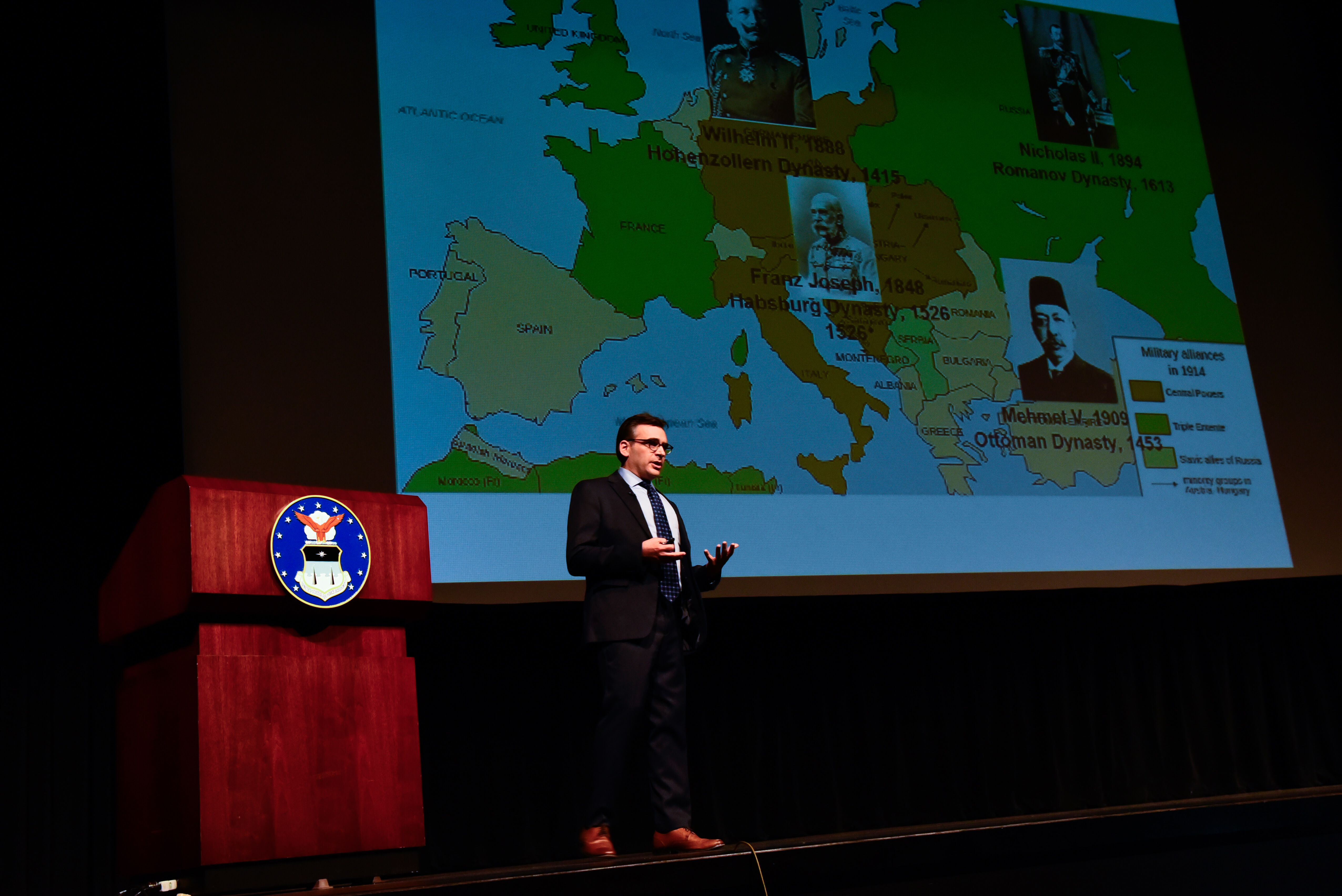 Michael Neiberg, history professor and chair of war studies in the Department of National Security and Strategy at the Army War College, speaks to cadets Oct. 9, 2018 about the global changes that occurred after World War I. Neiberg was the featured speaker during the 61st Harmon Memorial Lecture. (U.S. Air Force photo/Bill Evans)

U.S. AIR FORCE ACADEMY, Colo. — A national security and strategy expert said the world still reels from the aftermath of World War I.

“The world we live in today was created by World War I,” Michael Neiberg said.

The history professor and chair of war studies in the Department of National Security and Strategy at the Army War College said this and more during his presentation, “Peacemaking 1919 and the mistrust of History,” Oct. 9.

“We tend not to think much of World War I,” Neiberg said. “We tend to skip it.”

Neiberg was the featured guest at the Air Force Academy’s 61st annual Harmon Memorial Lecture. He specializes in examining the geopolitical effects of the two World Wars. World War I, or the “Great War,” began July 28, 1914 in Europe and ended Nov. 11, 1918.

Global leaders were not prepared for the “radical a change the world went through” from 1914-1918,” Neiberg said, or for the widespread changes that took place after the war.

Europe was reshaped, the U.S. became a global power, fascism and Nazism were on the rise, and festering international conflict led to the start of World War II in 1938, he said.

World War I brought social and cultural changes, including the global women’s suffrage movement, and “changed the mentality of war,” Neiberg said. It also led to a rise in ethnic cleansing, genocide and the use of poison gas. In all, he said, the war involved more than 70 million service members and the mobilization of 60 million Europeans. Nine million combatants and seven million civilians died as a result of the war.

The war also influenced modern warfare strategies, tactics and the equipment, including submarines armed with torpedoes and long-flight aircraft.

“Everything we can do now was thought of in World War I,” Neiberg said.

For all the changes, good and bad, Neiberg said many issues remain unresolved.

“We’re still dealing with the same questions we were dealing with in 1919,” he said. “Should we stay away from international agreements? Should be get involved? That debate has not gone away.”

These issues, all heavily influenced by World War I, are the cause of the geopolitical situation cadets will grapple with as officers.

Cadet 1st Class Jonathan Banks was at the lecture. He said today’s cadets must be able to adapt to the volatile political landscape.

“The world, politically speaking, looked entirely different a mere 100 years ago,” he said. “There’s no guarantee it will continue to look the way it does now in even a few decades. We have to make ourselves comfortable with the notion that the political landscape can, will, and maybe even should change.”

Neiberg said the impact of World War I is still seen today in the Persian Gulf as global leaders continue to deal with two unresolved questions.

Banks said cadets should consider the effects of every war in human history.

“It all depends on how closely you want to look,” Banks said. “I think the effects of World War I are more immediately relevant when you’re looking at issues in the Middle East and Eastern Europe, which are big focus areas right now.”

The Harmon lectures began in 1959.