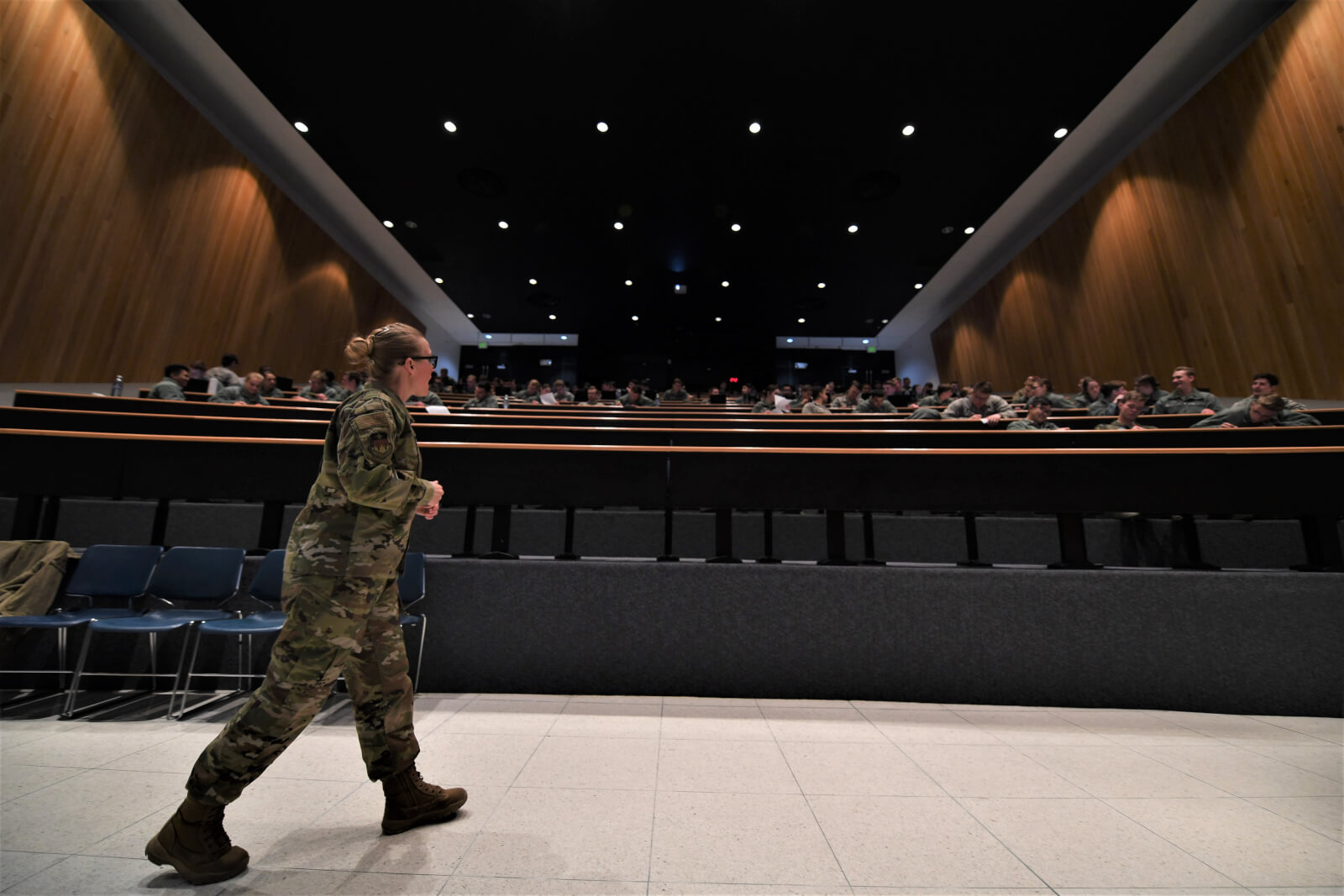 Master Sgt. Gloria Kuzmicki is a Department of Behavioral Sciences and Leadership instructor at the Air Force Academy’s Dean of Faculty. She teaches approximately 300 freshman, sophomore and junior cadets.

“I didn’t think that teaching in the academic classroom was something I would be able to do as an active-duty, enlisted Airman,” said Kuzmicki, Department of Behavioral Sciences and Leadership instructor.

The opportunity, though, wasn’t clear during the beginning of her career. She was supposed to be in the ammunitions career field, but an injury derailed the plan in technical school.

“When I broke my hip and had to have surgery, the doctors noticed some abnormalities with my labs and performed a bone scan, which identified an area on my shoulder blade that was found to be chondrosarcoma, or cartilage cancer,” Kuzmicki said.

Following a bone test, Kuzmicki was transported to Wilford Hall Medical Center in San Antonio, Texas, where medical practitioners performed a biopsy and a partial removal of the affected shoulder bone. After the surgery, tests showed the cancer was successfully removed and she remains cancer free today.

“I fought to stay in service because I wanted to serve my country and provide a better life for my son,” Kuzmicki said.

She was re-classified to information management, now called administration. For 17 years, she’s provided administrative support to Air Force and deployed units. Her passion for teaching grew as she facilitated professional development for her subordinates. She taught change and conflict management courses, led upgrade training for administration Airmen, and hosted lunch-and-learn events. Additionally, she provided administrative support for ROTC cadets at Arizona State University for five years, advising cadets on academics and enlisted perspective.

“It gave me a taste of teaching,” Kuzmicki said. At the same time, she was completing her master’s in marriage and family and a graduate certificate in business management and leadership. 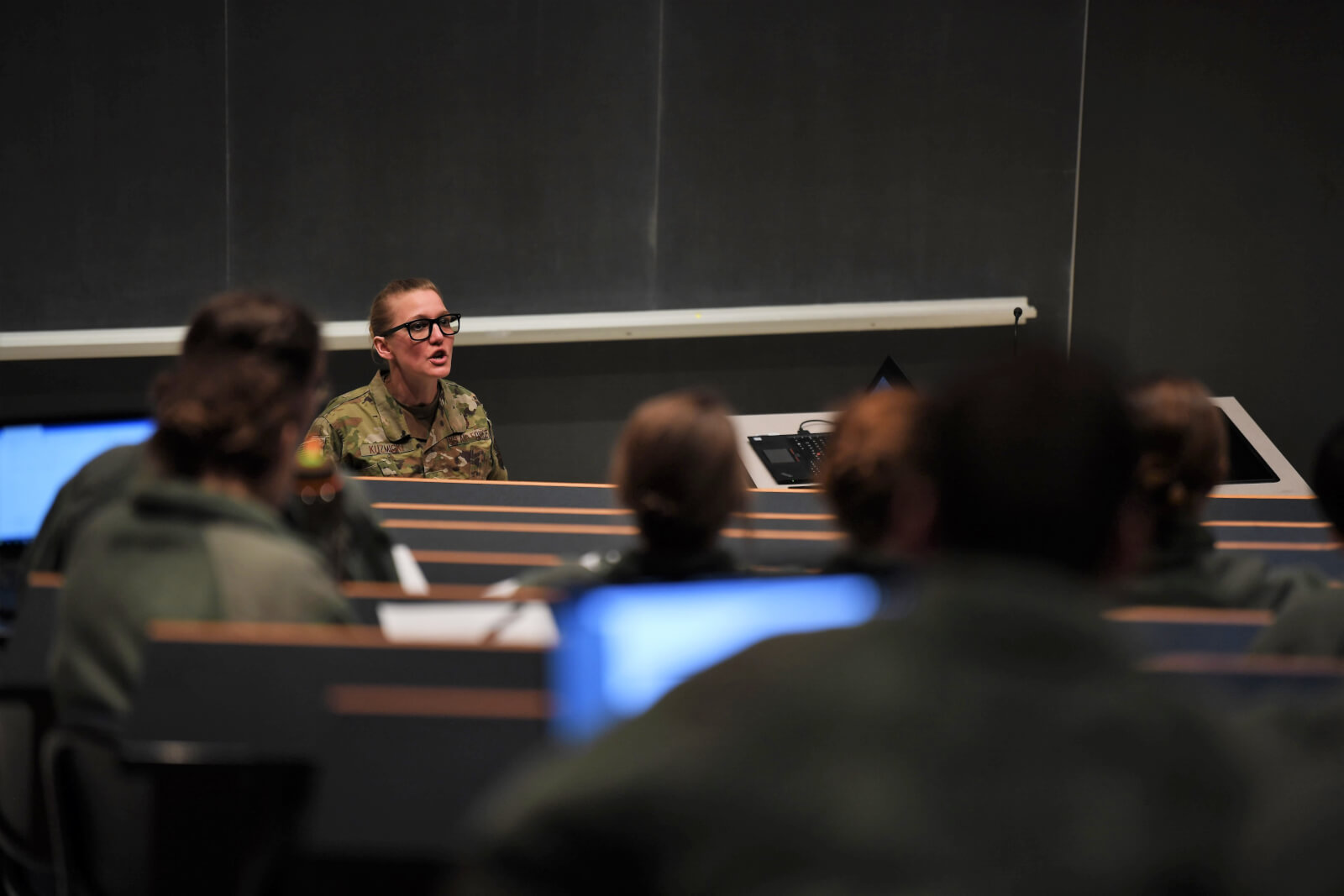 Although enlisted Airmen, such as Academy military trainers, contribute to the Academy’s mission of developing leaders, Master Sgt. Gloria Kuzmicki is among the first senior NCOs to be assigned to the Academy as accredited academic faculty instructors.

She didn’t know about the enlisted academy faculty instructor position until a chance encounter with Chief Master Sgt. Sean Milligan before he became the Dean of Faculty chief at the Academy.

“I went back and looked at the criteria, and everything that is involved,” Kuzmicki said. “This is amazing, it aligns with everything I went to school for. This is something I want to do and something I am passionate about.”

Although enlisted Airmen, such as Academy military trainers, contribute to the Academy’s mission of developing leaders, she is among the first senior NCOs to be assigned to the Academy as accredited academic faculty instructors.

“What makes this position unique for the enlisted force is that we could potentially be working for these individuals one day,” Kuzmicki said.

Kuzmicki’s position, equivalent to an instructor at an accredited college, highlights the educational background of enlisted Airmen. One requirement to become an enlisted academic instructor is a graduate degree in one of the 20 academic paths the Academy offers cadets. Another requirement is their Airmanship qualities.

“We are building second lieutenants here. It is important we put the right Airmen in front of cadets,” said Milligan. “Enlisted academic instructors must exhibit the highest levels of excellence and standards.”

“Master Sergeant Kuzmicki’s operational experience is significant, and this increases her effectiveness as an instructor,” Milligan said. “One key component to teaching at the Academy is to prepare cadets to lead as officers in our Air Force. The operational experience she shares in the classroom works toward that goal.”

Kuzmicki said that being an instructor is challenging, but worth it.

“I feel very blessed and honored to have this opportunity. I am very humbled to be here,” she said. “I am going to do everything I can to be successful and set up this position for those who come after me. Hopefully, we can continue to expand it.” 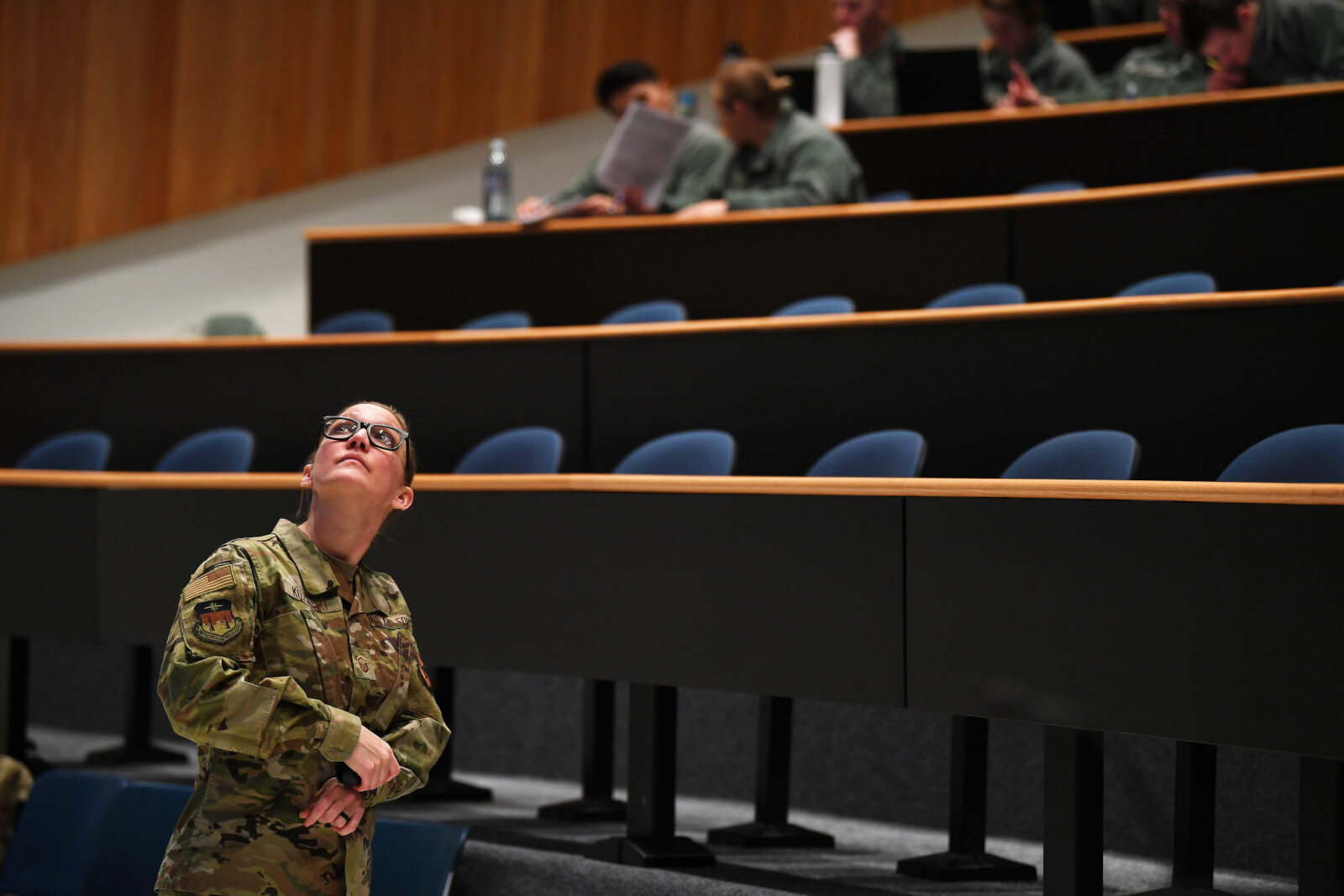 One of the requirements to become an enlisted academic instructor is a graduate degree in one of the 20 academic paths the Academy offers cadets.