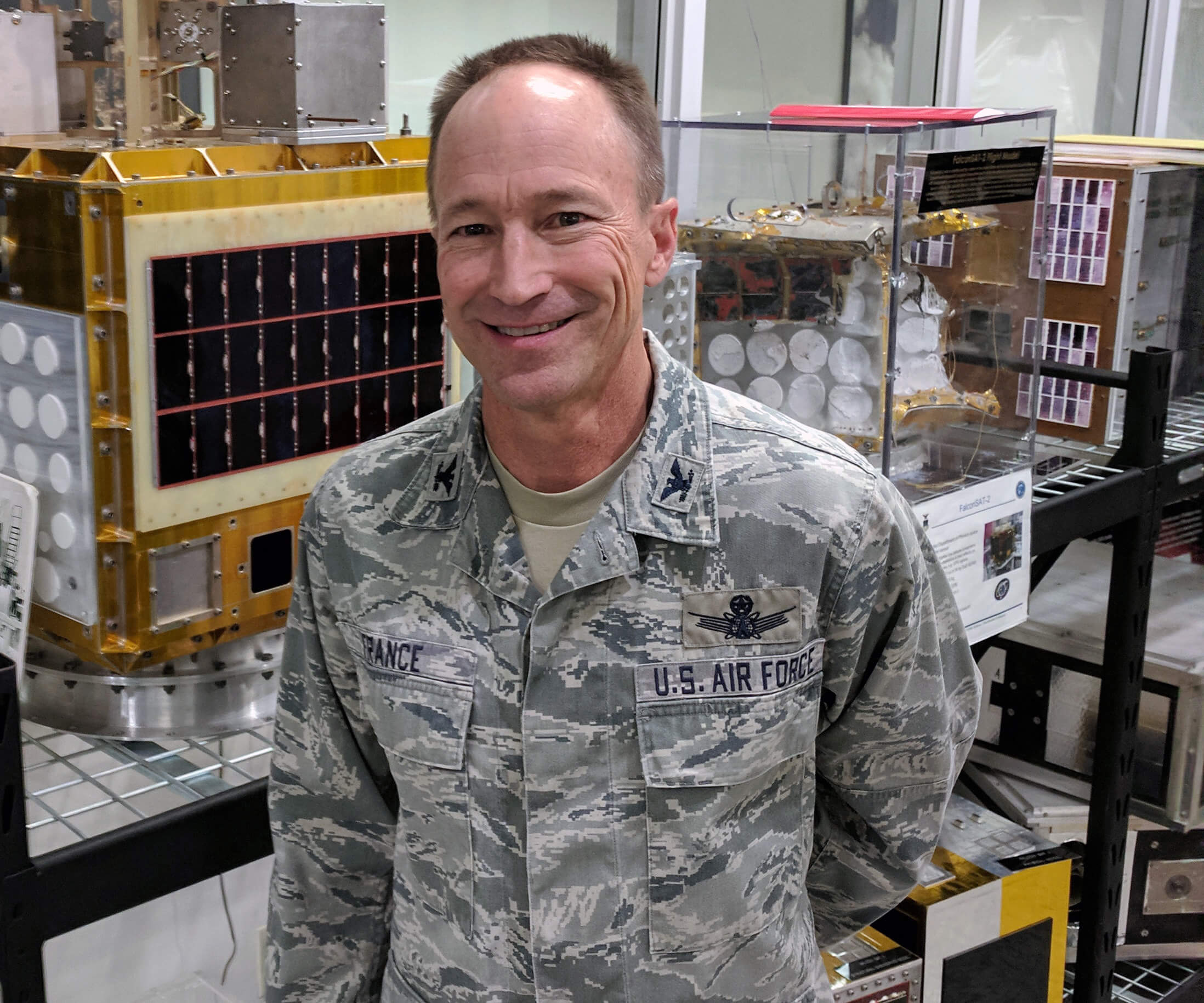 “Learning space by doing space” is the motto of the Air Force Academy’s unique FalconSAT senior capstone engineering program, a program unlike any other undergraduate space program in the world. Each year Astro Department faculty, aided by experts from other departments, NCOs, technicians and contractors, provide cadets with the real hands-on experience of designing, building, testing, and launching and operating satellites for the Air Force.

FalconSAT’s roots trace back to the early 1980s when the first cadet experiments were designed for space shuttle missions. These later morphed into balloon-launched testbeds and small payloads followed by free-flying satellites launched in the early 2000s. Since the mid-2000s, the Air Force Research Lab has sponsored the FalconSAT program, providing funding and payloads to give cadets this unique opportunity. Each FalconSAT has included payloads intended to provide flight heritage and experimental data to researchers at AFRL, the Academy, NASA, Air Force Space Command and major contractors.

We like to say that each year, we have to fire our complete cadet staff, as one class graduates, and hire a new one. For the Class of 2018, the first few weeks involved learning the current state of the FalconSAT program, and being interviewed and screened before they’re selected for jobs within the program. Throughout the year, cadets and staff work as a team to advance the program, presenting status updates at the end of the semester. Cadets travel to brief senior leaders and gain approval for the program at the major command, Air Force and Defense Department levels, participate in testing campaigns at AFRL facilities, and represent FalconSAT at launch working groups.

This year’s program focuses on two goals: completing preparations for the launch and operation of FalconSAT-6 and the assembling the FalconSAT-8 flight model. The FalconSAT-6 flight model was completed in 2016 and is awaiting launch in 2018 on the Space Test Program’s STP-2 mission aboard a Falcon Heavy launch vehicle produced by SpaceX. The primary mission of FS-6 is to test electric propulsion, contamination measurement, and advanced solar power technologies. Cadets are preparing to operate FalconSAT-6 from the Michael Wynne Space Operations Center in the Astro Lab using the FalconSAT-6 Avionics Test Bed, a hardware-in-the-loop simulator.

FalconSAT-8 will test advanced propulsion technologies and small payloads that will gain space flight heritage. It is scheduled to be launch-ready in late 2018.

FalconSAT experience is invaluable to the development of future Air Force leaders. Graduates of the program have earned numerous nationally competitive scholarships, including two Rhodes scholarships and three Holaday Fellowships in the last 15 years, and have gone on to do similar work at the Space and Missile Systems Center, the AFRL, National Reconnaissance Office, and in operational space and rated duties. Many cite their real-world FalconSAT lessons as the best, most effective preparation for active duty that they received during their cadet career.