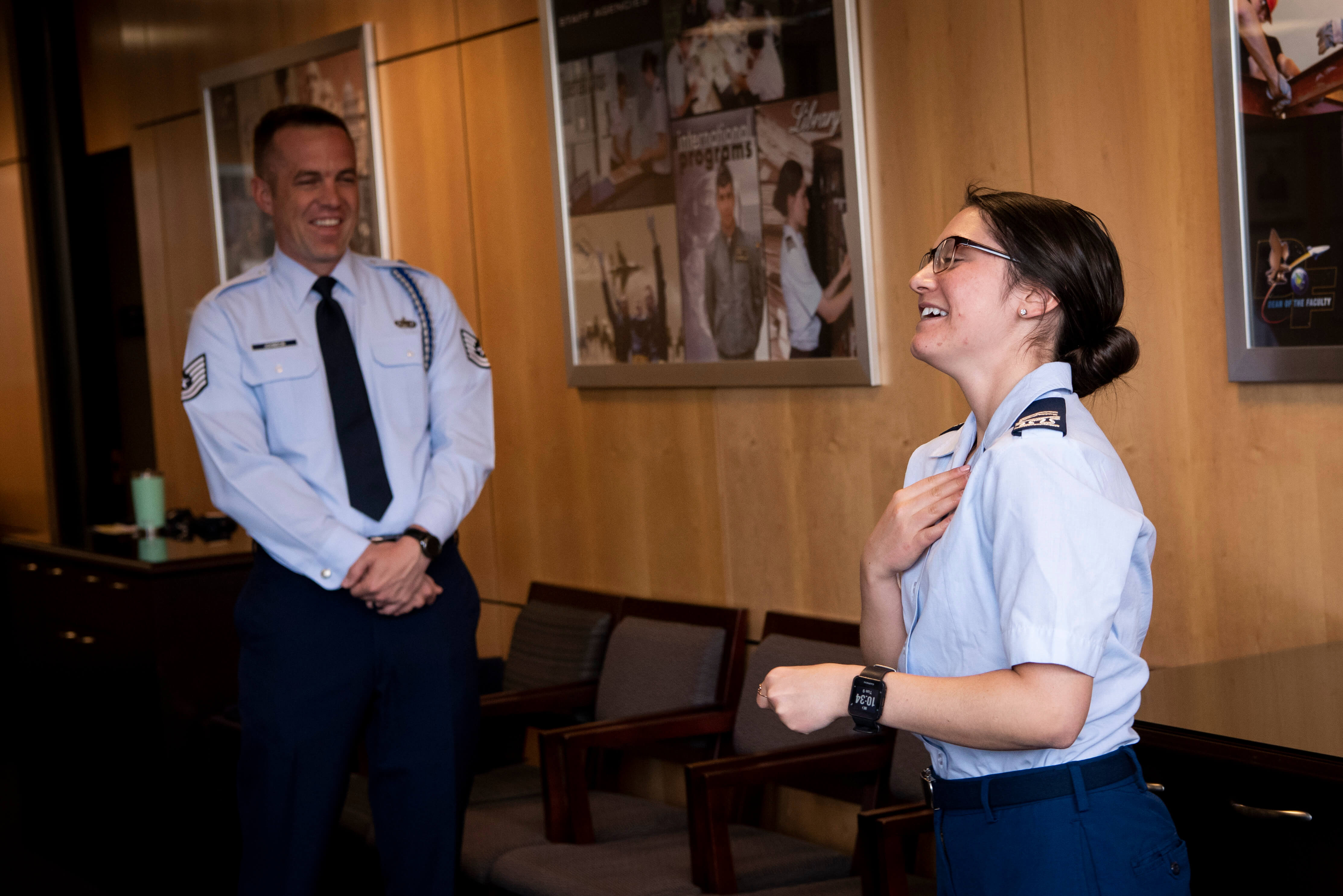 Xander, from Corry, Pennsylvania, is also going after a minor in Japanese studies. She’s mulling over a career as a medical service corps officer after completing her master’s, courtesy of her new scholarship.

“I plan to spend next semester narrowing my options,” she said. “I don’t know the exact school I’ll go to, but I do know I want to get my master’s in public policy. My main focuses are childhood and healthcare.”

Xander’s plans fit right into the Truman scholarship as most recipients seek master’s or doctorates in public administration and health; international relations; and government, economics, and social services; among other public-service fields.

“These scholarships make it easier for individuals to make a difference in society,” she said.

Xander rates her Academy learning experience an “11 out of 10.”

“The Academy has provided me with so many amazing opportunities I would not have had elsewhere,” she said.

So far, Xander’s academic and military programs have sent her to Japan, the UK, Arizona, Louisiana, Pennsylvania and Texas.

“I’ve grown tremendously as an individual and leader thanks to my time at the Academy,” she said.

The Truman scholarship is one of 11 scholarships the Academy supports. The list includes Fulbright, Marshall and Rhodes scholarships.

“These scholarships add to the experiential layer cadets receive here, learning based on observation and experience, and enlightens and empowers them as both individuals and officers as they engage with international communities, Armacost said.

“From the Truman to the Rhodes to the Marshall scholarships and all others, they’re a tremendous benefit not only to the individual cadet, but to the Air Force, the Defense Department and ultimately the nation, in the realm of innovation and thought,” he said.

Helen Meisenhelder directs the Academy’s graduate studies program and holds a doctorate in social psychology from Loyola University-Chicago. She said graduate studies add to the cadets’ experience, especially in the realm of science, technology, engineering, mathematics and other specialties Air Force officials list as priorities.

Scholarships that place cadets in countries outside the U.S., enhance the cadets ability to form international partnerships, Meisenhelder said.

“From a cultural competence perspective, those scholarships are invaluable,” she said.

“Through these scholarships, cadets sharpen their abilities and their capability to think, to solve problems of national and global concern and apply their knowledge to a wealth of issues they’ll face as leaders of thought in our Air Force and in their civilian careers,” he said.

It’s common in military circles to say “your successes belong to those who influenced you,” and Xander believes this. She said her “biggest mentor in life” is her cadet squadron commander, 2006 Academy graduate Maj. Matthew Hatt.

“Major Hatt helped mold me into the person I am today by forcing me to get comfortable with being uncomfortable,” she said. “My story is a direct product of his dedication to me and my development.”

Hatt said Xander’s selection as a Truman scholar was a “no brainer.” He’s most proud of Xander’s “stay hungry” attitude.

“She aggressively tries to improve and she’d definitely not comfortable being stagnant,” he said. “Cadet Xander chases opportunities that place her outside of her comfort zone. She’s going to do well no matter where she ends up.”

Xander said the thought of graduating 2020 almost makes her sad.

“I’ll miss the amazing mentors I’ve had,” she said. “I say without reservation that I would not be the person I am today, and especially not a Truman Scholar, had it not been for several mentors who took me under their wings.”