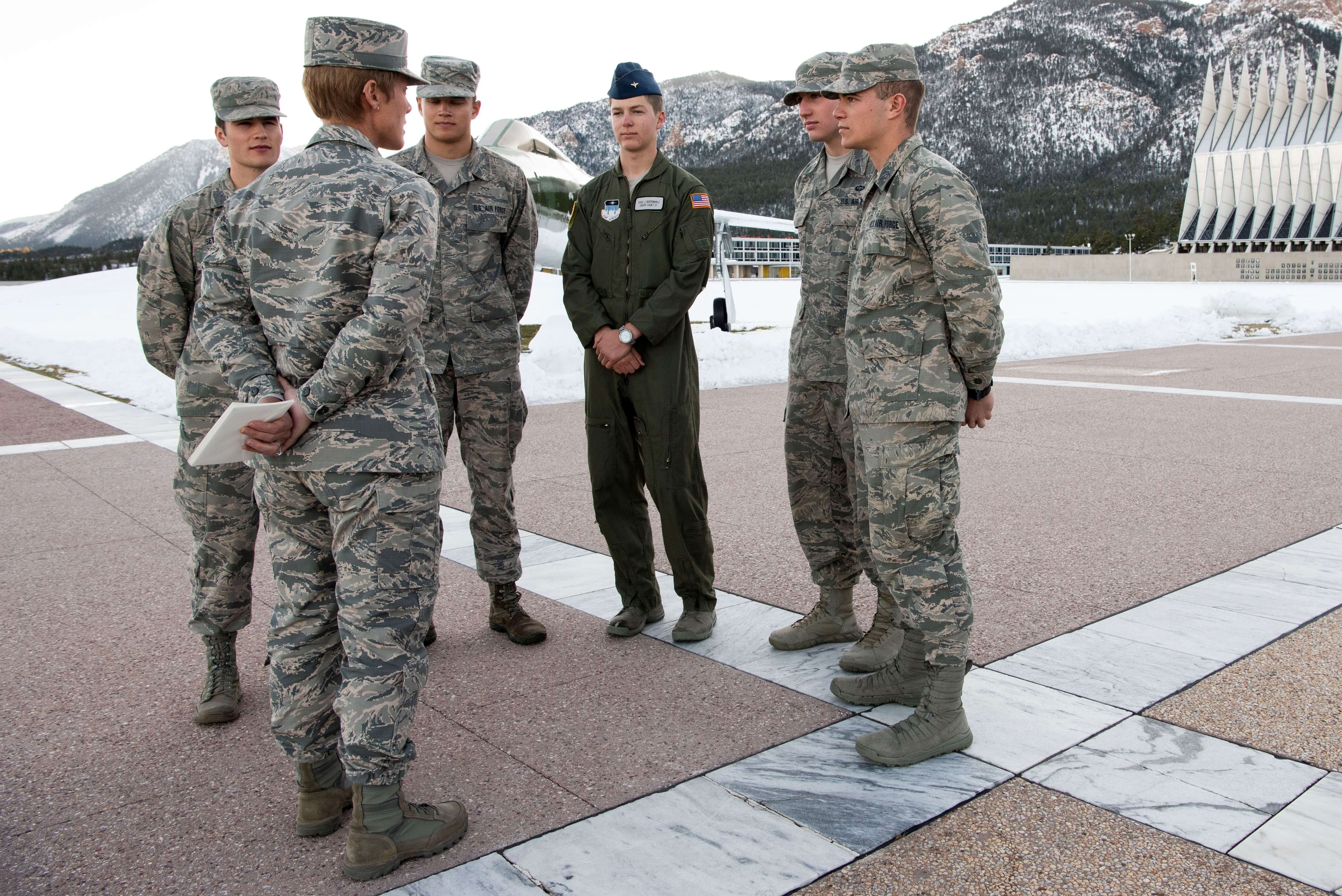 U.S. AIR FORCE ACADEMY, Colo. — Brig. Gen. Kristin Goodwin (left), commandant of cadets at the U.S. Air Force Academy, chats with a group of cadets on the terrazzo, Nov. 13, 2018. The five cadets seen here helped a family out of an overturned vehicle after it lost traction and slid off the highway near Breckenridge, Nov. 11, 2018. (U.S. Air Force photo/Joshua Armstrong)

U.S. AIR FORCE ACADEMY, Colo. -– Returning from a weekend ski trip in Breckenridge, Colorado, five Air Force Academy cadets witnessed the vehicle in front of them fishtail, turn perpendicular to the road and slide off the ridge.

Fearing the passengers were injured, Cadets 3rd Class Connor Settle; Joseph Canoy; Karl Boerwinkle; Joel Krause; and Antonino Del Rossa decided to act. Krause remained with the car and dialed 911 while the other four grabbed their jackets and moved down the hill to locate the vehicle.

“It was instinctual. We knew they needed someone to help, and there was no one else on the road, so we took the responsibility into our own hands,” Del Rossa said.

The cadets could hear the trapped driver honking his horn as they descended. The vehicle had plummeted more than 100 feet and landed upside down in the wood line. The read end of the vehicle was collapsed.

“We weren’t really scared going down, but when we saw the car, I was pretty nervous about their safety,” Canoy said.

The cadets helped the driver and passenger get free. The driver kept yelling that his daughter was trapped in the back. Unable to pry the door open, Settle smashed the window to attempt to locate and free her. The daughter was eventually able to crawl forward and escape through the same door that her parents had.

“The Academy has exposed us to stressful situations, like basic training, and I think that’s why none of us were panicked,” Boerwinkle said.

Afterward, the cadets lent the family their coats and helped them up to the road where they stayed with them until the paramedics arrived. The cadets were relieved to learn that the family had escaped with what appeared to them as minor injuries.

“Once we got back in the car, I said, ‘I’m really proud of us, that there was no hesitation,’ and I was really happy that as a group of friends were able to work together like that,” Canoy said.

Brig. Gen. Kristin Goodwin, the commandant of cadets, recognized the cadets for their actions in front of the entire Cadet Wing.

“Their actions speak to the caliber of the cadets we have here at the Academy, and how the training they receive here can be just as applicable in the local community as in combat zones,” said Goodwin.