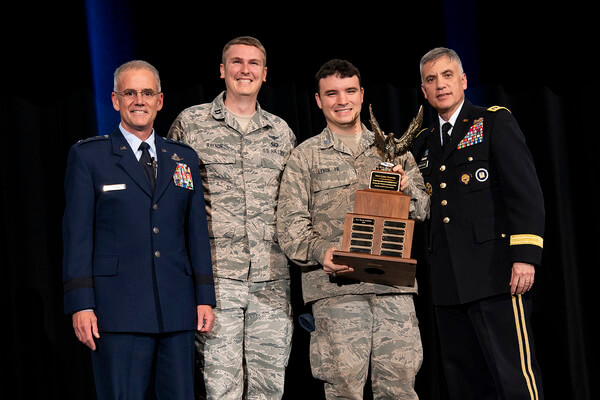 “The team and coaches spent a huge amount of time preparing themselves to compete,” said Col. David Caswell, head of the Academy’s computer and cyber sciences department. “Their victory is a testament to the capability of our cadets, and should give everyone confidence in the lieutenants we’re creating for our Air Force.”

The competition overlapped with the Joint Service Academy Cybersecurity Summit at the Academy, April 17-18.

“It was two full days of world-class discussion panels and exchanging ideas on the toughest problems in Internet security and across the cyber domain,” Silveria said.

The summit was a rare opportunity for cadets and midshipmen to discuss cyber security issues with senior military and public and private sector IT experts and focused on supporting goals presented by the National Security Telecommunications Advisory Committee’s Cyber Moonshot challenge, Caswell said.

“We were able to have robust discussions to develop Grand Challenge ideas that could aid international cyber security,” he said.

Silveria said it’s easy to be lighthearted when congratulating cadets for a cyber-competition win, but he knows computer and cyber sciences cadets take their learning curve at the Academy seriously.

“When you consider the threat the cyber domain poses, our cadets will be among our nation’s first line of defense after they graduate,” Silveria said. “These exercises and these summits add to their knowledge and no doubt help them build a stronger defense.”