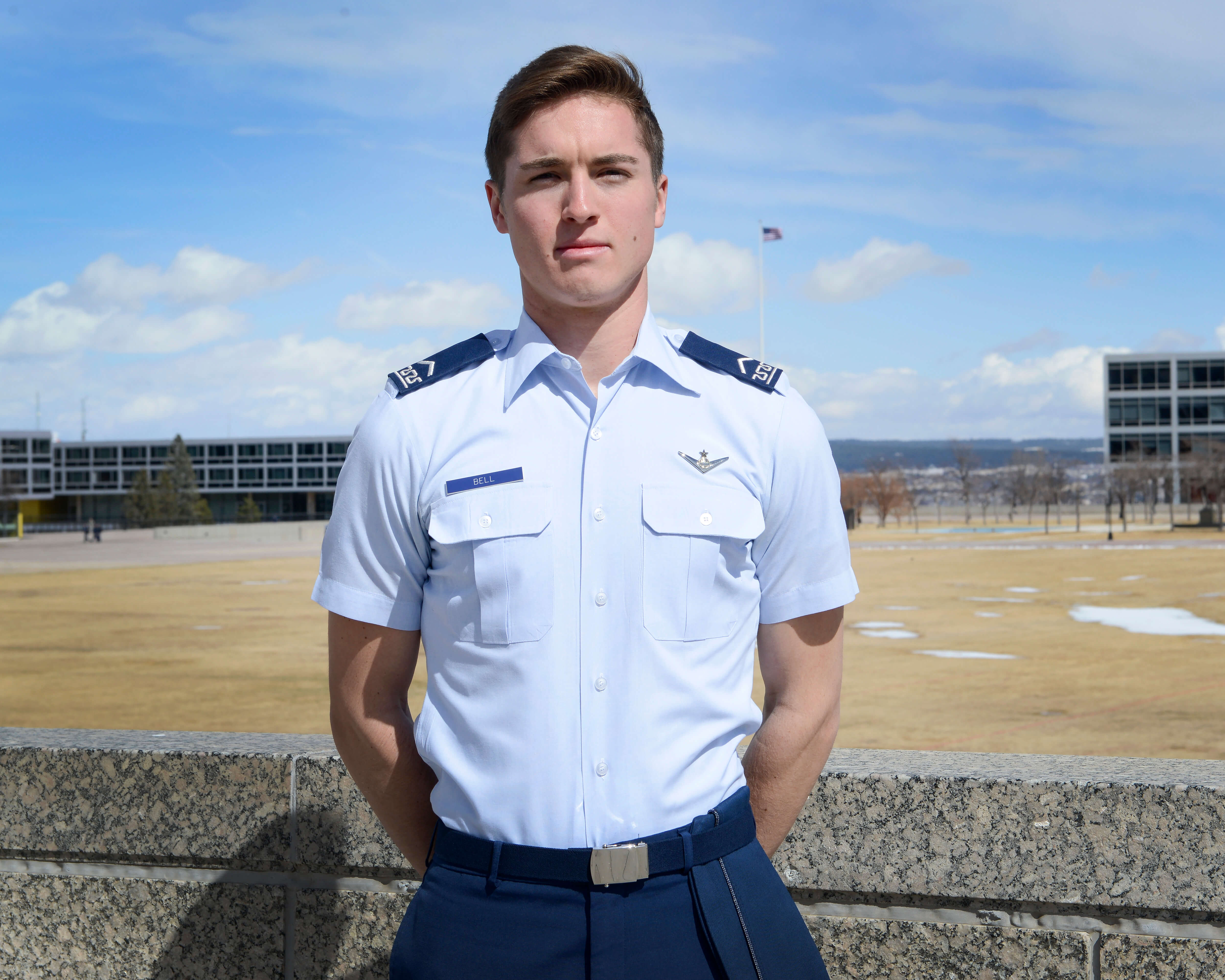 U.S. AIR FORCE ACADEMY, Colo. — There’s a lot more to the Air Force Academy’s honor code than not lying, stealing or cheating and tolerating those who do.

“To me, it’s about doing what’s right all the time and having the courage to act when it matters most,” said Cadet 3rd Class Jack Bell, Cadet Squadron 29.

In the span of 72 hours, Bell talked a suicidal man off a Colorado Springs overpass and helped air traffic controllers in Northern California locate a downed aircraft.

When it comes to living with honor, Bell said “Sometimes there’s a grey area and it doesn’t have anything to do with lying, stealing or cheating but with simply having integrity in how we carry out our everyday actions.”

Driving south on Interstate-25, Feb. 21, Bell noticed a man standing on the ledge of the Interquest Parkway overpass.

“That was something that obviously looked out of place, so I pulled over,” he said. “I could tell this guy wasn’t doing okay and something wasn’t right. I was just shocked by how many people drove by like nothing was wrong.”

Bell pulled over to the shoulder of the interstate overpass and dialed 911 to ask for assistance. He cautiously moved toward the man.

“I started with making small talk trying to get him off the ledge,” Bell said. “He kept saying ‘no, no, I’m fine.’ He clearly wasn’t.”

Bell engaged the man in conversation, trying to entice him off the ledge.

“I asked him, what do you plan on doing up here?” he said. “That’s when he kind of snapped out of it and realized what he was doing and got very emotional. He mentioned something about God and I saw that as an opportunity to use faith to connect with him.”

For 15 minutes, Bell convinced the man to step down from the ledge.

“I finally said ‘how about we walk off this bridge together,’ and he agreed,” Bell said.

Academy security forces and firefighters arrived to the scene while Bell walked with the man up the street.

“He had a wife and two kids,” Bell said. “He hugged me afterward and told me he was just waiting for a semi-truck to come down the freeway before I started talking to him. That’s what he went there to do and he was ready to act upon those intentions.  I am so grateful that he was able to return safely to his family and get the help he needed.”

Bell, a licensed pilot, was flying an SR-22 aircraft with his brother, sister and fellow cadet C3C Austin Kintz, toward Monterey, California. Over the radio, air traffic control told Bell of a plane in his area that fell off their radar and went radio silent. Engine failure was the last transmission the controllers received.

“Up in the air, everyone is a fellow Airman,” Bell said. “Airman to Airman, you help each other out when in need. It’s what we do in the military as a whole, we answer the call whenever and however it comes. So it wasn’t even a second thought for me.”

Air traffic controllers gave Bell the last coordinates of the missing plane and asked if he would fly over the area.

“I had to find a small hole in the clouds that I could punch through and do a little tactical spiral decent to get down below the cloud layer and head toward the location we were given,” he said.

Bell located the aircraft in a California coastal mountain range and circled the area. His passengers looked out the window reporting on the crash site while Bell circled the aircraft above the scene. They could see that the wings and fuselage appeared intact and that the pilot had survived the impact.

“I know someone else would have done the same for me,” Bell said. “It’s the kind of brotherhood mentality we breed here [at the Academy] and in the flying community as a whole.”

Bell said his actions stemmed in part from his military upbringing and the values instilled within him from a young age. His father served as a Navy fighter pilot for 20 years and his mother has an extensive background within education.

“My parents played a significant role in shaping me into who I am today,” he said. “They used to always tell us, if you can look yourself in the mirror at the end of the day and be satisfied with your actions, then you know you did the right thing. That’s what makes character and integrity.”

“To me, that’s what this whole experience [the Academy] has meant as well. It’s about learning the core values of service and living honorably all the time. It’s rare when we come across these kinds of situations, but when we do, we have an opportunity to make a difference. Then it’s simply a matter of acting.”

Maj. Jamie Johnson, the air commanding officer of CS-29, spoke highly of Bell’s courage to do the right thing.

“Jack is an exceptional testament of how one Airman can make life-changing impact on others,” he said.

Bell added that the Academy tests him every day.

“I think the tests this place throws at you prepares you for the tests you’re going to find not just in combat, but in life,” he said.