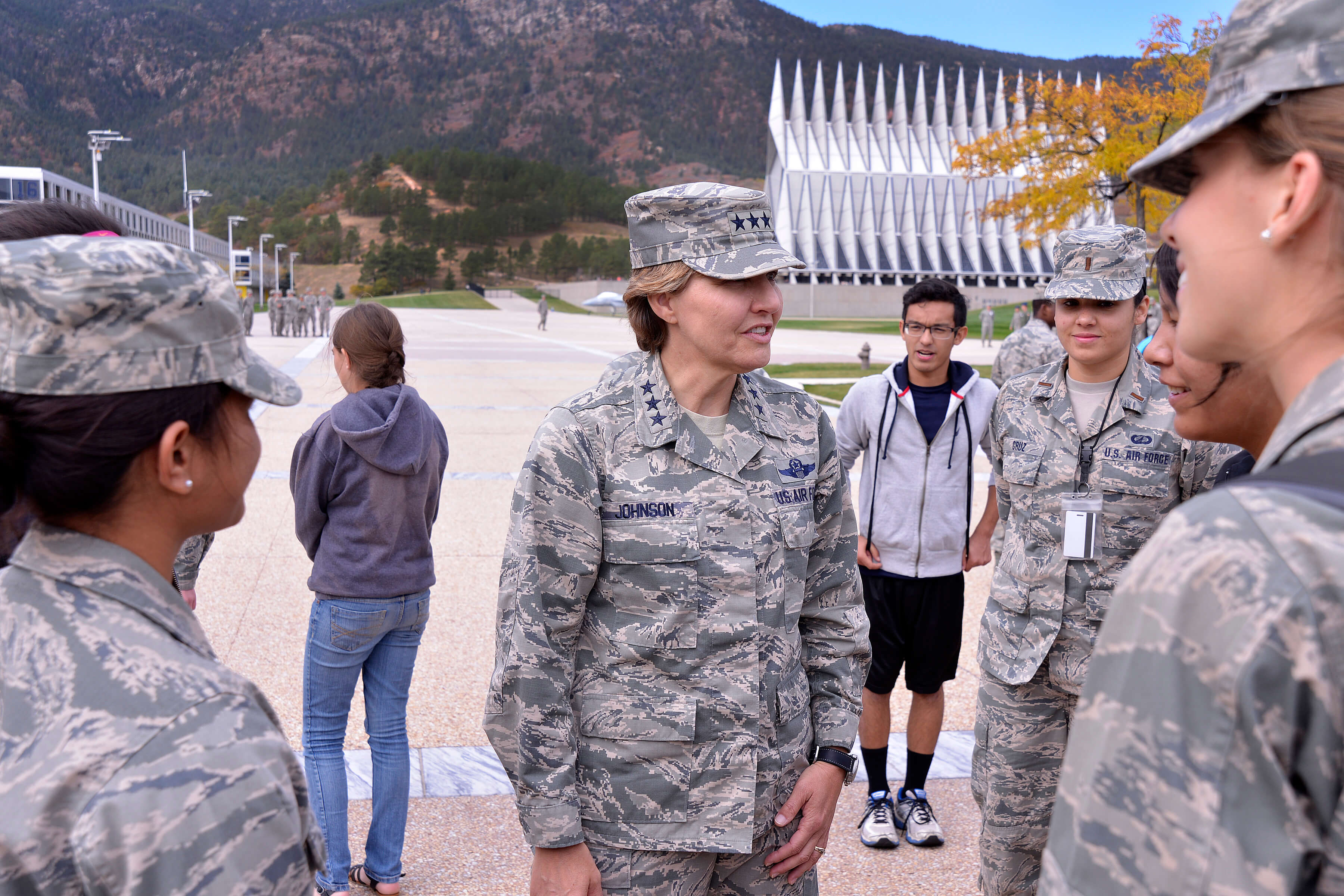 Construction will start next year on a visitor’s center near the U.S. Air Force Academy’s North Gate.

Johnson had this and more to say during her last commander’s call as superintendent, Aug. 3.

“Keeping the Academy contemporary will ensure it stays at the top of its game,” she said.

Johnson, a 1981 Academy graduate, is among the second class of women to graduate the Academy. She’s the first woman to serve as superintendent. She said the Academy is obliged to develop officers adept at thinking ‘outside the box’ with a comprehensive understanding of contemporary technology.

“We live in an amorphous world of asymmetric threats we really need to think through,” she said.

Expanding the Academy’s academic and cultural diversity is fundamental to keeping the school contemporary, Johnson said.

“Diversity aids in solving modern geopolitical problems,” she said. “Problem solving across diverse groups — that’s what we need to be doing.”

“This institution is 63 ‘years young’ and we’re growing into ourselves in a series of ways,” she said. “Should we be delivering education the same way as we did in 1958? The world has changed, our class size has changed and our needs have changed. What can and should Airmen do now and not be shackled by custom? Our customs are so important but not if they block progress.”

Johnson said the Academy has led from the academic vanguard by giving cadets a contemporary curriculum.

“We’re seriously looking at how we use cadet’s time [during the academic year],” she said.

This includes revising the core curriculum for the Class of 2021.

“We fine-tuned what exactly the Academy wants to see in our graduates,” said Dr. Hal Taylor, deputy head for student academic affairs and academy registrar, in an Aug. 7 interview. “It’s been a years-long process.’

The Academy’s mission elements worked together to develop nine institutional outcomes for cadets during Johnson’s tenure as superintendent, Taylor said: critical thinking; application of engineering methods; scientific reasoning and the principles of science; the human condition, culture and societies; leadership, teamwork and organizational management; clear communication; ethics and respect for human dignity; national security of the American republic; and warrior ethos as airmen and citizens.

“Every core course supports one of these outcomes,” Taylor said.

Along with the new visitor’s center, Johnson discussed other projects scheduled to occur by 2022, including increasing the bandwidth of the Academy’s computer network, and refurbishing Clune Arena, the dormitories at the Air Force Academy Preparatory School, Sijan Hall and the Cadet Chapel.

“Clune Arena hasn’t been updated in ‘ever,’” she said.

There’s also the ongoing security and construction upgrades to the Academy’s North and South Gates, geared to keep the Academy in line with security guidelines established by the Air Force.

“The entire Air Force is upgrading its security infrastructure and so are we,” she said.

Johnson said Academy officials are accountable to tax payers and must manage these projects accordingly.

“We must be responsible stewards of our tax dollars,” she said.

Johnson thanked the civilians and service members in the audience for their service to the Academy and for their support during her four year stretch as superintendent.

“You’re helping build a future,” she said. “What you do here matters so much. The bottom line is that I don’t get to see all of you all the time, but I do thank you for your service and your dedication to our mission of developing leaders of character.”

Johnson will swap command of the Academy with Lt. Gen. Jay Silveria Aug. 11 and retire from military service later this year, events she said she’s still “trying to process.”

“[Serving as superintendent] had been the capstone professional opportunity of my life,” she said.