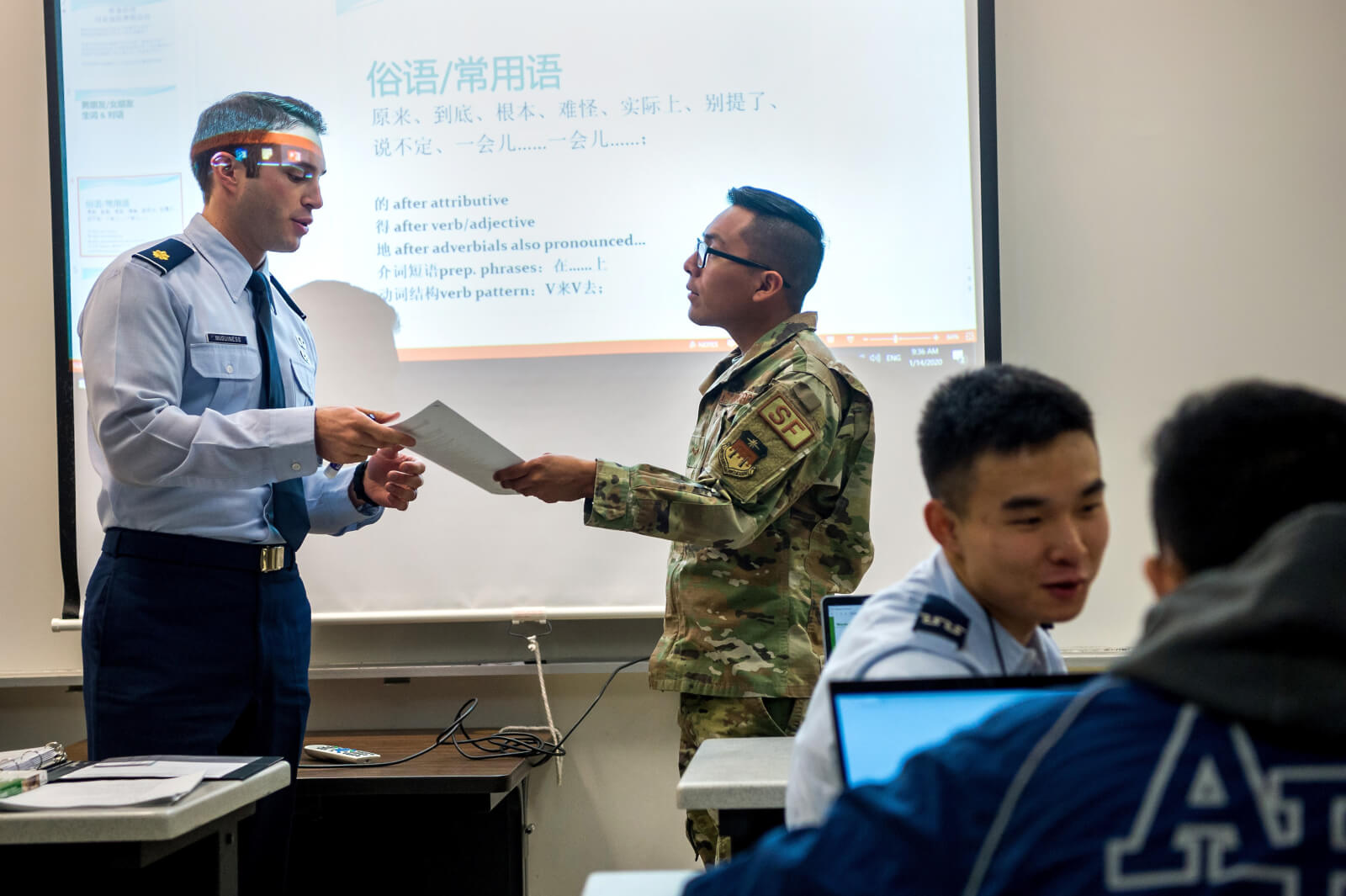 Maj. Kevin McGuiness (left), a Chinese language instructor, and Airman 1st Class Curtis Fields, a security forces Airman, discuss paperwork McGuiness will use in class, Jan. 14, 2020, at the U.S. Air Force Academy. Fields is attending the class to improve his own Chinese language skills and is also helping McGuiness conduct an unofficial audit of the class. (Photo/Trevor Cokley)

U.S. AIR FORCE ACADEMY, Colo. – Most of what Maj. Kevin McGuiness had to say in class Jan. 14 might have been in Chinese, but his students didn’t mind.

Neither did Airman 1st Class Curtis Fields, who is moderately fluent in Chinese.

Fields is a security forces Airman assigned to the 10th Security Forces Squadron at the Air Force Academy, and McGuiness is a Chinese language instructor at the school. Starting this month, Fields has been conducting an unofficial audit in McGuiness’s class to soak up the experience and improve his own Chinese language skills.

“I get to mingle with cadets. It’s nice to struggle with them,” Fields said. “Chinese is a hard language and the cadets understand that.”

Fields said McGuiness and the cadets have welcomed him into their classroom.

“They look forward to seeing what I have to offer,” he said. “As an enlisted Airman, I enjoy being in this environment and share their passion for the language.”

Fields, 25, was born in Panama and adopted by a U.S. military family stationed at the now defunct Howard Air Base.

“I was sickly and malnourished, so when my family adopted me, they literally saved my life,” he said.

Fields spent most of his childhood in the U.K., where his father was stationed, and began learning Chinese in high school.

“I picked it up really well,” he said.

Fields said his Chinese language skills were useful during the two-year church mission he was assigned after graduating high school.

“That experience emphasized why knowing other cultures and learning how we communicate with one another is important,” he said. “When I got home, I kept at it and now I have the chance to keep learning it.”

McGuiness said Fields is a valuable addition to his classroom.

“Cadets’ interactions with the enlisted force are limited [in a classroom environment] when compared to the role they will find themselves in career fields like logistics, maintenance, security forces …  as officers,” he said. “Engaging with him offers an additional chance to engage professionally.”

Jue Wang, a Chinese language professor at the Academy, helped Fields get to the classroom.

“Here’s an airman who has a busy schedule but never gives up learning,” she said. “His passion for the language as a lifelong learner is a great inspiration and example for cadets.”

“Curtis is a great example of how diverse our security forces Airmen are and how eager they are to contribute to the Academy mission,” he said. “Anytime we can put a ‘Defender’ of his caliber among cadets, everyone wins. He has a unique opportunity to continue his growth while positively effecting future Air Force leaders.”

“Watching cadets take the time to learn such a complex language hammers home the idea that we’re one family here,” he said. “It’s a privilege to see future officers in the making.”