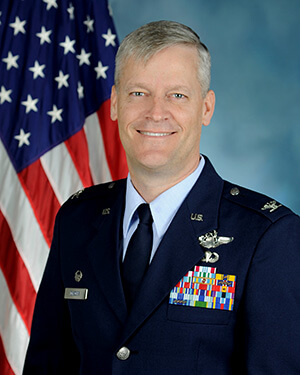 Commissioned through the United States Air Force Academy in May 1997, Colonel DeBoer earned his pilot wings at Columbus AFB, Mississippi in August 1998. He is a Command Pilot with over 2,200 total flying hours in fighter and training aircraft and served as an Instructor Pilot and Flight Evaluator in both the F-16 and T-38 aircraft. Colonel DeBoer has held various jobs at the squadron, group, major command and joint staff levels. His command experience at the squadron level was with the 560th Flying Training Squadron at Joint Base San Antonio-Randolph. Prior to his current position, Colonel DeBoer was the Executive Officer to the Commander, Headquarters Air Education and Training Command.