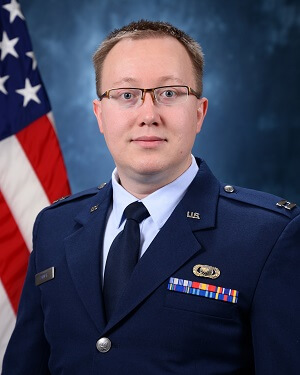 Captain Aleksander Romich is an Instructor of Chemistry within the Department of Chemistry at the United States Air Force Academy, Colorado.

Captain Romich earned his Bachelor of Science degree from Loyola University Chicago. As part of his undergraduate research, he synthesized novel phenothiazine-based compounds for use in anti-cancer photodynamic therapy. After several years working as an Instrumentation Chemist in the polymers and plastics industry, he attended Officer Training School (Class of 17-01) and commissioned as a second lieutenant. His first assignment was at the Air Force Research Laboratory (AFRL) at Edwards Air Force Base, California. There he developed high-temperature materials for next-generation air-to-air missiles. Upon promotion to first lieutenant, he led test operations as liaison for several USAF and DARPA weapons programs. After being selected for the Air Force Institute of Technology’s Civilian Institution Program, he attended the Colorado School of Mines in Golden, Colorado. In 2022, Captain Romich earned his Master of Science degree focusing on the effects of Arsenazo III on the observed kinetics of lanthanide(III)-DOTA complexation reactions.

Capt Romich is married with two children. He is fluent in Polish, conversational in German, and looks to learn at least one more language in the near future.