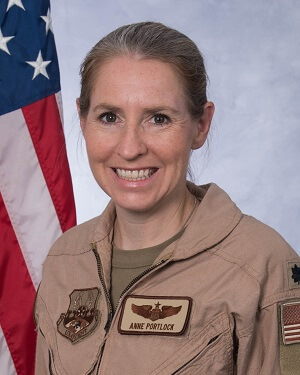 Lieutenant Colonel Anne Portlock serves as the Director of Personnel for the Department of Economics and Geosciences.  She directs talent acquisition and management for 30 multidisciplinary faculty positions to develop leaders of character to serve in the U.S. Air and Space Forces.

This is her second assignment under the Dean of Faculty.  Prior to returning to USAFA, Lieutenant Colonel Portlock was the Deputy Commander for the 964 AACS at Tinker AFB, Oklahoma, where she led an operational E-3 AWACS squadron, overseeing operations and training while provided administrative support to nearly 300 personnel.  She is a Senior Pilot with more than 2,000 hours and deployments in support of Operation Inherent Resolve, Operation Spartan Shield, and counter drug operations.

With her husband, Lieutenant Colonel Derek Portlock, she is raising three daughters.  She received her commission from the U.S. Air Force Academy where she competed on the NCAA Cross-Country and Track & Field teams.  Throughout her career she has continued to model excellence in physical fitness competing as an elite marathoner and ultra-marathoner, representing the Air Force in national level competitions.

Applied Microeconomics & Policy Analysis with a focus in Health, Personnel, and Military