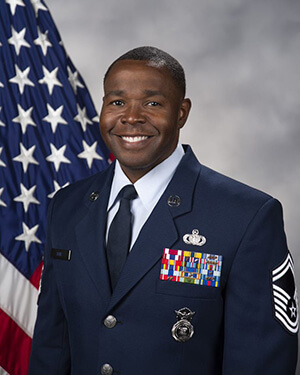 Senior Master Sergeant Patrick A. Hunt is the Senior Enlisted Leader for the Center for Character and Leadership Development, Headquarters, United States Air Force Academy, Colorado. In this role, he advances understanding and implementation of effective character and leadership development practices across military, academic and athletic settings for cadets, faculty and staff. Sergeant Hunt inspires cadets to embrace the Air Force Core Values as the foundation of their lifelong development as leaders of character and provides experiences, tools, and collaborative opportunities to foster character and leadership growth for cadets, faculty, and staff. Additionally, he serves as an Academy Faculty Instructor in the Department of Management, as an instructor, he educates cadets, whom of which will become future leaders in the Air Force on Character and Leadership through focusing on owning, engaging and practicing habits of thought and action in an organizational leadership context. SMSgt Hunt wholeheartedly supports the United States Air Force Academy Mission: To educate, train and inspire men and women to become officers of character motivated to lead the United States in service to our Nation.

Diversity, Equality and Inclusion in the Workplace Certificate, University of South Florida, Florida (2021)