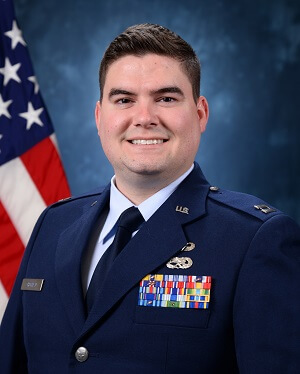 Captain Spencer Sherman is a Chemistry Instructor within the Department of Chemistry under the Dean of Faculty, U.S. Air Force Academy, Colorado. Captain Sherman was born in Mobile, Alabama in 1993 and grew up in a military family living up and down the east coast. After graduating from Great Bridge High School in 2011, he attended the U.S. Air Force Academy, where he studied Biochemistry. Following his commission in 2015, Capt Sherman reported to RAF Lakenheath, UK to serve as an aircraft maintenance officer (21A). His first major roles was as Officer in Charge of the 56th Helicopter Maintenance Unit working with HH-60G rescue helicopters. In 2017, he relocated to his second duty station, Grand Forks AFB, ND, to work with RQ-4B Global Hawks. He married his wife, Capt Jexenia Bennett, a 2017 USAFA graduate, in 2017. After serving for five years as an Aircraft Maintenance Officer, the U.S. Air Force Academy Department of Chemistry selected Capt Sherman to earn his master’s degree in-residence via the Air Force Institute of Technology’s Civilian Institution degree program. He graduated from Colorado School of Mines with his master’s in chemistry in 2021 before being stationed at USAFA to teach.