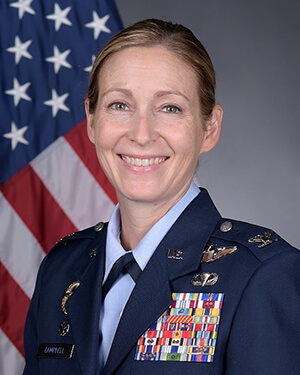 Colonel Kim N. Campbell is the Director of the Center for Character and Leadership Development, United States Air Force Academy, Colorado. The Center’s mission is to serve the Air Force Academy by advancing character and leadership development in preparation for service to the nation. The Center is responsible for aligning and supporting professional development for faculty and staff and reinforces character and leadership programs within the 4,000-member Cadet Wing. The Center hosts several large forums per year including the annual National Character and Leadership Symposium and conducts leading-edge research, instruction, and assessment for advancing the 21st Century Profession of Arms. The Center is integral to the Academy’s mission of graduating officers of character and integrating the Air Force’s Core Values of Integrity, Service, and Excellence for faculty, staff, and cadets.

Colonel Campbell was commissioned in 1997 as a distinguished graduate of the United States Air Force Academy with a Bachelor of Science degree in space operations. She is a Marshall Scholar with two master's degrees, one in business administration from the University of London, and one in international security studies from the University of Reading, England. She has served as a Squadron Commander, Operations Group Commander, Air Force Senior Fellow at the Atlantic Council, Military Assistant to the Under Secretary of Defense for Policy in the Office of the Secretary of Defense, and an instructor in the Department of Military and Strategic Studies at the United States Air Force Academy.

She is a command pilot with over 1,700 hours in the A-10, including 375 combat hours. She has flown combat missions in Operation Southern Watch, Enduring Freedom, and Iraqi Freedom.

Air War College, Maxwell Air Force Base, Ala, by correspondence (2010)