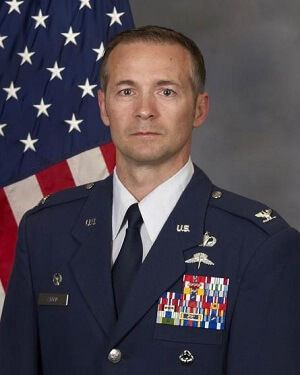 Colonel Thaddeus P. Allen is the Director of the Preservation of the Force and Family United States Special Operations Command, MacDill AFB, Florida. The POTFF mission is to identify and implement innovative, valuable solutions across the SOF enterprise aimed at improving the short and long-term well-being of our 72,300 SOF warriors and their families.
Col Allen received his commission from the Air Force Academy in 1992 and began his career as a program manager in the Fitness Testing and Evaluation division of the USAFA Athletic Department, while also performing duties as a NCAA assistant wrestling coach. He is a senior parachutist, a combat diver, a military freefall parachutist, and a qualified Joint Terminal Attack Controller (JTAC). He has deployed six times in support of Operations DESERT FOX, ENDURING FREEDOM and IRAQI FREEDOM. In 2005, he deployed to CENTCOM as the Expeditionary Special Tactics Group Commander, commanding special tactics forces in Iraq, Afghanistan, and Qatar, while also directing teams in the Horn of Africa and Pakistan for humanitarian assistance following a devastating earthquake. He deployed to Afghanistan as the 21st Expeditionary Special Tactics Detachment Commander during the squadron’s 2006-2007 deployment. During his command at the 321st Special Tactics Squadron, RAF Mildenhall, UK, he deployed forces to Georgia as part of the US response to the 2008 Russo-Georgia War, to Afghanistan as part of the NATO-led International Security Assistance Force Task Force 10, and to Iraq. In 2010, he served as the Fires Branch Chief in the Operations Directorate of HQ USSOCOM, MacDill AFB, Florida, responsible for all Close Air Support, JTAC, and fire support issues. Additionally, he was selected as the lead Air Force Special Operation representative to USSOCOM’s Preservation of the Force and Family Task Force. He then commanded the 22d Special Tactics Squadron at Joint Base Lewis-McChord for two years and deployed twice as the 22d Expeditionary Special Tactics Squadron Commander responsible for Special Tactics Airmen and missions across the entirety of Afghanistan. Most recently he was the Operations Division Director within the AFSOC Operations Directorate responsible for leading eleven branches including the Command’s Readiness, small UAS, Personnel Recovery, Weather, Information Operations, Exercises, Ranges, Airfield Operations, Advance Special operations Techniques, and Special Tactics mission areas.