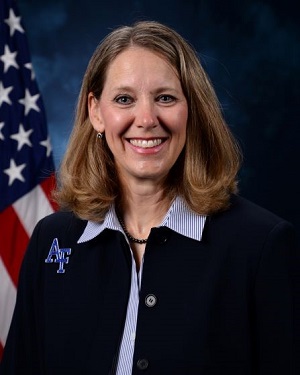 Jennifer Block is in her first year as Executive Director of Athletics, where she is the senior government official in Air Force Athletics.

Prior to coming to Athletics, Block was the Reserve Advisor to the Superintendent at the Academy. She also served as the Career Field Manager (CFM) for contracting reserves and served as the senior Individual Mobilization Augmentee (IMA) to the deputy assistant secretary for contracting, Headquarters Air Force, Pentagon, Washington, D.C., which leads the development and implementation of complex and agile acquisition strategies and contracting policy and was the principal advisor to the Athletic Director ensuring diversity and sexual assault prevention programs and projects are developed in accordance with Federal, DoD, Air Force and USAFA guidance, policy, architecture and national standards.

A native of San Antonio, Texas, Block entered the Air Force after graduating from the Academy in May 1992 with a bachelor’s degree in Management. While at the Academy, she was a four-year letter winner in volleyball and was named the team’s most valuable player in 1991. Block was also a team captain, three-time all-conference selection and earned all-region honors.

As an Air Force contracting officer, she worked at every level of federal acquisitions and has served staff tours at both major command and air staff levels. She provided leadership and management for all contracting activities in US Air Forces in Europe, developed contracting policies and procedures for the entire command and was responsible for operational plans and allocation of resources. She also led the most complex contracting flight in the Air Force, administering over 850 contracts valued at $1.5B. Immediately after September 11th, 2001, she deployed as a contingency contracting officer and built a bare base in Karshi-Khanabad, Uzbekistan in support of the US Special Operations Command. She was awarded a Bronze Star for her support of Operation ENDURING FREEDOM and recognized as the AF’s Outstanding Contingency Contracting Support in 2002. Block is a decorated former Air Force officer, director, squadron commander, staff officer, executive officer, Operation ENDURING FREEDOM combat veteran and fully qualified level III contracting officer.