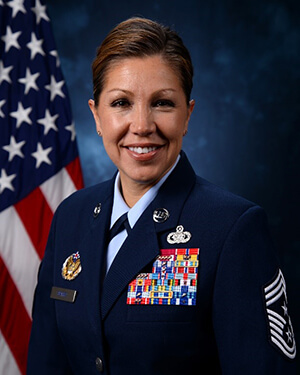 Chief Sparks enlisted in the Air Force in 1992. Her background includes experience at varying levels in the Material Management career field at the wing and command level. She has also dedicated much of her career to molding our future enlisted leaders as an Airman Leadership School Instructor, a Noncommissioned Officer in Charge of FTAC and a Noncommissioned Officer Academy Commandant. Chief Sparks deployed in support of OPERATION SOUTHERN WATCH and OPERATION ENDURING FREEDOM. Most recently, Chief Sparks served as the Command Chief of the 6th Air Mobility Wing at MacDill Air Force Base, Florida.

Associate of Applied Science in Instructor of Technology and Military Science, Community College of the Air Force, Montgomery, Ala. (2001)

Legion of Merit with one oak leaf cluster

Outstanding Airman of the Year Ribbon with bronze star

1998 Management and Systems Outstanding Supply/Fuels Personnel of the Year