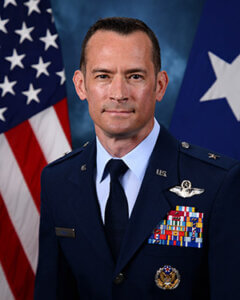 Prior to this assignment, Brig. Gen. Moga was the Chief of the Strategic Planning and Integration Division, Directorate of Strategic Plans, Deputy Chief of Staff for Plans and Programs, Headquarters U.S. Air Force, Arlington, Va. In this capacity, he managed the Department of the Air Force’s $4 trillion, 30-Year Resource Allocation Plan, reaching across every U.S. Air Force and U.S. Space Force funding portfolio.

He is a command pilot with more than 2,600 flying hours in the F-15C, F-22 and F-35A, including more than 250 combat hours in support of operations Southern Watch and Allied Force.

Air Command and Staff College, Montgomery, Ala. (by correspondence) (2006)