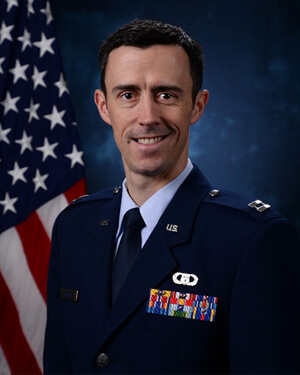 Captain Gibbons commissioned in 2012 through Officer Training School, after obtaining meteorology degrees from the University of Michigan and Saint Louis University. He has spent time at an Operational Weather Squadron, at the tactical level with a weather flight command, and deployed twice to Qatar as both an Executive Officer to a Maintenance Group and another weather flight command. He grew up just outside Chicago and loves Chicago and University of Michigan sports, running, triathlon, and reading a good book.