Instructor of Electrical and Computer Engineering 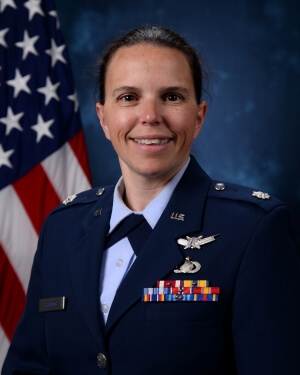 Lieutenant Colonel Rebecca Breiding is an Instructor and Deputy for Operations for the Department of Electrical and Computer Engineering at the U.S. Air Force Academy. She instructs students in a variety of classroom and laboratory courses, and assists the Department Head in planning and scheduling the department’s 25 faculty, staff, and researchers and courses.

Lieutenant Colonel Breiding entered the Air Force in 2004 through Air Force ROTC at Rose-Hulman Institute of Technology. She has served in multiple leadership positions in the Air Force Research Laboratory, and air and space offices. She was a ground test engineer for the X-37A Approach and Landing Test Vehicle and a vehicle launch engineer for the Minotaur I and Delta IV. As program manager, she fielded the Airborne Cuing and Exploitation System, Hyperspectral on the MQ-1 in response to urgent operational needs. Finally, she was the Analysis Branch Chief at the Air Force’s War gaming Institute, exploring solutions to the Air Force’s pressing problems. Prior to her current position, she was a student at the Air Force’s Air Command and Staff College at Maxwell Air Force Base, Alabama.