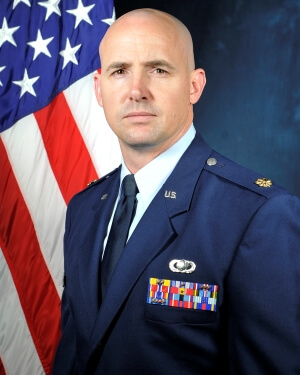 Major Jacob Harley enlisted into the Air Force in 1994. He was trained as a vehicle auto-body repairman and reached the rank of Technical Sergeant before being selected for the Airmen Education and Commissioning Program in 2003. He was then sent to the University of Wisconsin-Madison to earn his undergraduate degree in Physics. He commissioned from UW-Madison in 2006 as a Physicist.

Major Harley’s first assignment as an officer was at the National Air and Space Intelligence Center, Wright-Patterson AFB, Ohio. There he served as an Air Defense Modeling Engineer where he developed various analysis tools for the understanding of enemy integrated air defense systems. Eventually he was selected to earn his Master’s degree at the Air Force Institute of Technology (AFIT). He remained at AFIT to also earn a Doctor of Philosophy. Since then he has served with the Department of Physics at the US Air Force Academy and is now Senior Military Faculty.

Dissertation:  Development of Imaging Fourier-Transform Spectroscopy for the Characterization of Turbulent Jet Flames