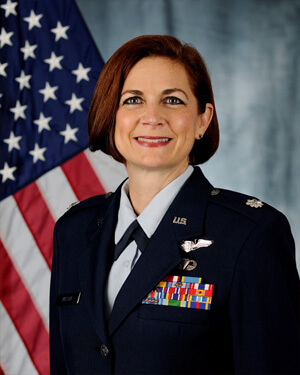 Lt Col Wilson began her career as a park ranger in the Lassen National Forest. Working her way through college, she entered ROTC at CSU Sacramento in 1993. While in ROTC, she was hired as a mathematics instructor, teaching at-risk college students. After receiving an AF commission, she was assigned to Los Angeles AFB, as a Concept Design Analyst and Satellite Test Branch. During this tour, she was competitively selected for a year internship, as a laser technician with the Aerospace Corp. From there, she was assigned to the U.S. Air Force Academy and taught integral calculus. In 2002, she moved to Edwards AFB and performed operational flight test for the F-22. From there, she was competitively selected to attend the Naval Postgraduate School, where she earned her MS in Mathematics.

In 2007, she arrived at Eglin AFB, and performed operational test for several electronic warfare systems. She was deployed in 2009 to work in the Combined Air Operations Center (CAOC), as the Iraq Assessments Cell Chief. In 2010, she was competitively selected for a PhD in economics. With dissertation completed, she was assigned as Senior Economist to the Secretary of the AF, at the Pentagon. During her DC tour, she was assigned as the Military Assistant Commander for the 58th Presidential inauguration. In 2017, she returned to the academia field, at U.S. Air Force Academy, where she is currently an Assistant Professor in the field of economics.

Associate in Arts, Math and Sciences

Selected for NASA candidate from AF (2003)

Department of Mathematical Sciences Best New Instructor of the Semester (2000)

Honor Guard Member of the Quarter (1999)

“On the Equilibria of the Extended Nematic Polymers Under Elongational Flow”