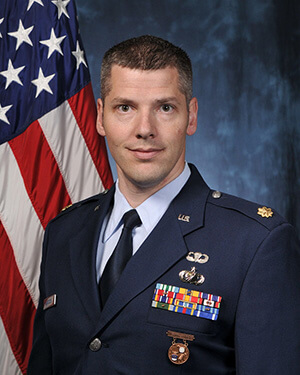 Lieutenant Colonel Babcock commissioned as a U.S. Air Force graduate from the class of 2004, after which he completed his master’s degree at the Air Force Institute of Technology in aeronautical engineering, specializing in computational fluid dynamics. As a developmental engineer, he was assigned at the Air Force SEEK EAGLE office where he specialized in computational fluid dynamics on a wide variety of Air Force aircraft and weapons. Following that, he was assigned to the Air Force Research Laboratory (Munitions Directorate) where he specialized in micro-air vehicle aerodynamics and control in a $3M in a low-speed wind tunnel. At that time, he was accepted and began his doctorate studies at the University of Florida, culminating in a dissertation entitled “Aeroservoelastic Design for Closed-Loop Flight Dynamics of a MAV”. After graduating with his Ph.D., he was assigned as a program manager in the F-16 program office where he managed an urgent operational need program with a $1.6B budget and a team of over 90 people. He was assigned to the Department of Aeronautics in 2016 where he currently serves as an Assistant Professor of Aeronautics, specializing in flight mechanics and flight control.