Cadet First Class Kendra Middleton has always been fascinated with flight. Some of her earliest memories are of her grandfather, who built and flew his own planes alongside a ragtag gang of “little old men who would fly into each other’s back yards.” Kendra’s mother is also an aerospace engineer with a degree from University of Colorado Boulder. Having been born into a family of aviators, combined with a love for science and math, the Air Force Academy seemed a fitting place for Kendra. The culture of research and innovation at USAFA would only galvanize those passions.

The idea of ‘basic research’ is rarely synonymous with fun. But rewind your VHS back to those wonder years— the mud pie making, bug collecting, barefoot hill-climbing days of endless summer. Press pause; do you see it? It’s you and your neighbor, out collecting rocks, blowing stuff up in the yard, concocting potions, building forts. As children we thrived on asking questions, drawing, making, testing, breaking, building. To be human is to be a researcher of everything around us.

Kendra was fortunate enough to become an Aeronautics major with her longtime-friend, Cadet First Class Emily Huber. Squadron mates during the tumult of freshman year, they remained close through their majors’ courses, and in the summer of their senior year they achieved the dream—setting stuff on fire and shooting lasers alongside your partner in crime. They accomplished this with the Air Force Academy’s one-million dollar combustion shock tube—the only one of its kind in any undergraduate institution across the country. They would be the first team to conduct research on it.

A combustion shock tube works much like it sounds. It is essentially a long metal tube that uses gases at varying low and high pressures to generate a shock wave. In this environment, it is possible to test the kinetics of a chemical combustion while also being able to vary extremely high temperatures, pressure, and types of gas/liquids. While they primarily tested gases like ethylene and methane, they are paving the way for future testing of liquids. These are incremental but critical steps for data collection, and Emily and Kendra’s preliminary data will be used by subsequent teams in the Cadet Summer Research Program.

Cadets recognize that their research at USAFA, although maybe not immediately seen, will have impact on the operational Air Force and Space Force they are entering. Though still in its preliminary stages, data from the combustion shock tube can be used to expand frontiers on fuel efficiency, and may impact the way the Air Force refuels its planes and fights its wars.

“The research [project] was the most fun; it was a lot of work, but it didn’t feel like work,” Kendra says. The combustion shock tube was not even the team’s top choice for a research project, but it ended up challenging them in ways they did not anticipate. It required them to recall information from their various knowledge bases, including physics, chemistry, and calculus, to build their research model. It also helps when you like who you’re working with, and according to Emily, it helps to be in a department working with phenomenal, supportive faculty like the Aeronautics department, who are always engaging your curiosities.

Emily’s family recognized her strength in science, technology, engineering and math (STEM) at an early age, and were highly supportive of her decision to go to the Air Force Academy. One of her most rewarding experiences here has been her volunteer involvement with Girls In the Middle, a Colorado-based STEM camp which encourages middle school girls to pursue STEM careers. Emily encourages young girls who love math and science to take the ropes. “Don’t be afraid,” she says. “Don’t be afraid to say ‘let me be part of this, let me take control of this.’”

As Emily and Kendra approach their graduation and Air Force commissioning, they will take with them the invaluable skills they learned from their research experience into future leadership roles–collaboration, innovation, perseverance, and maybe even how to have a little fun while solving difficult problems.

Check out our Research Centers page to learn more about the 24 different programs we have here at the Academy. 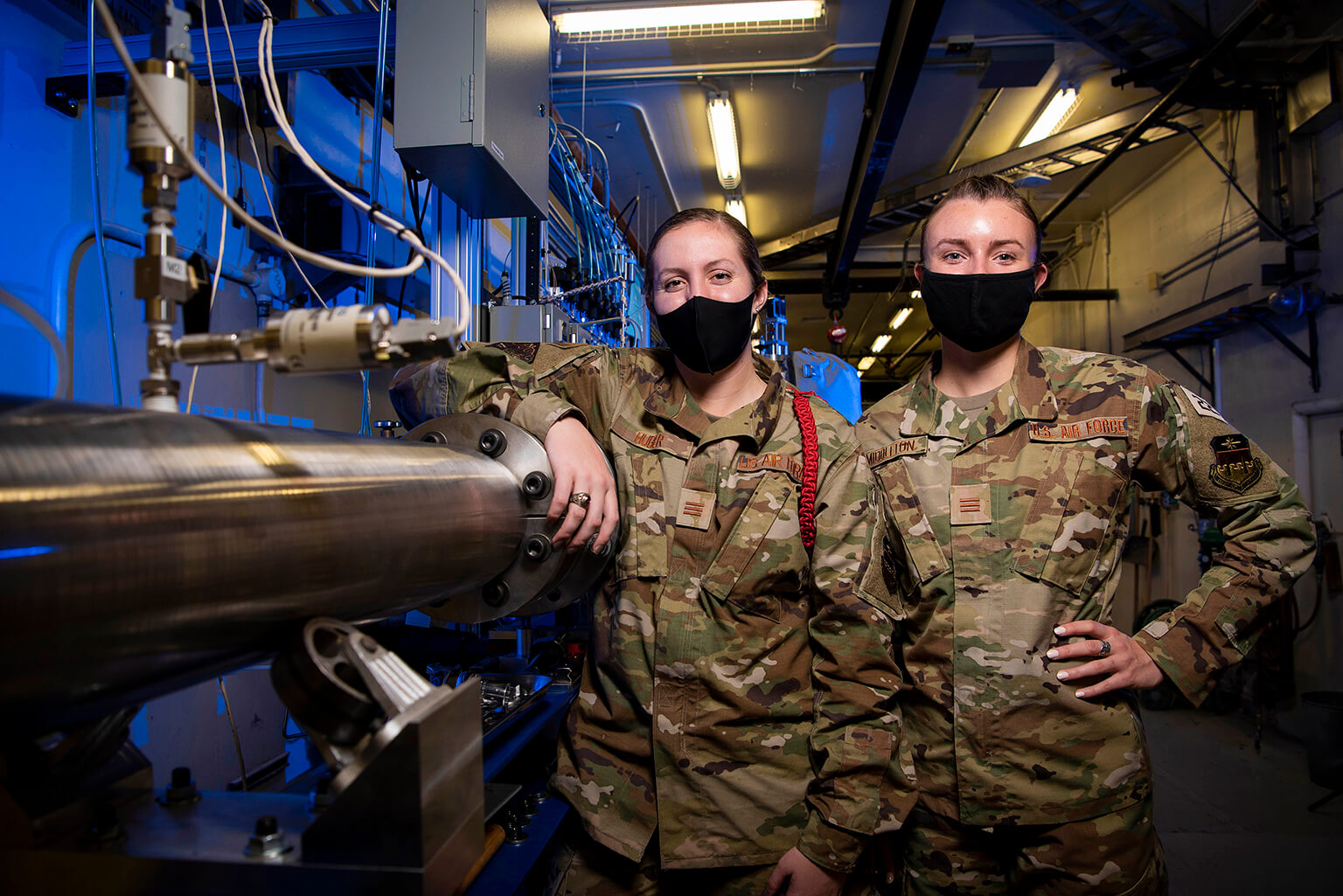