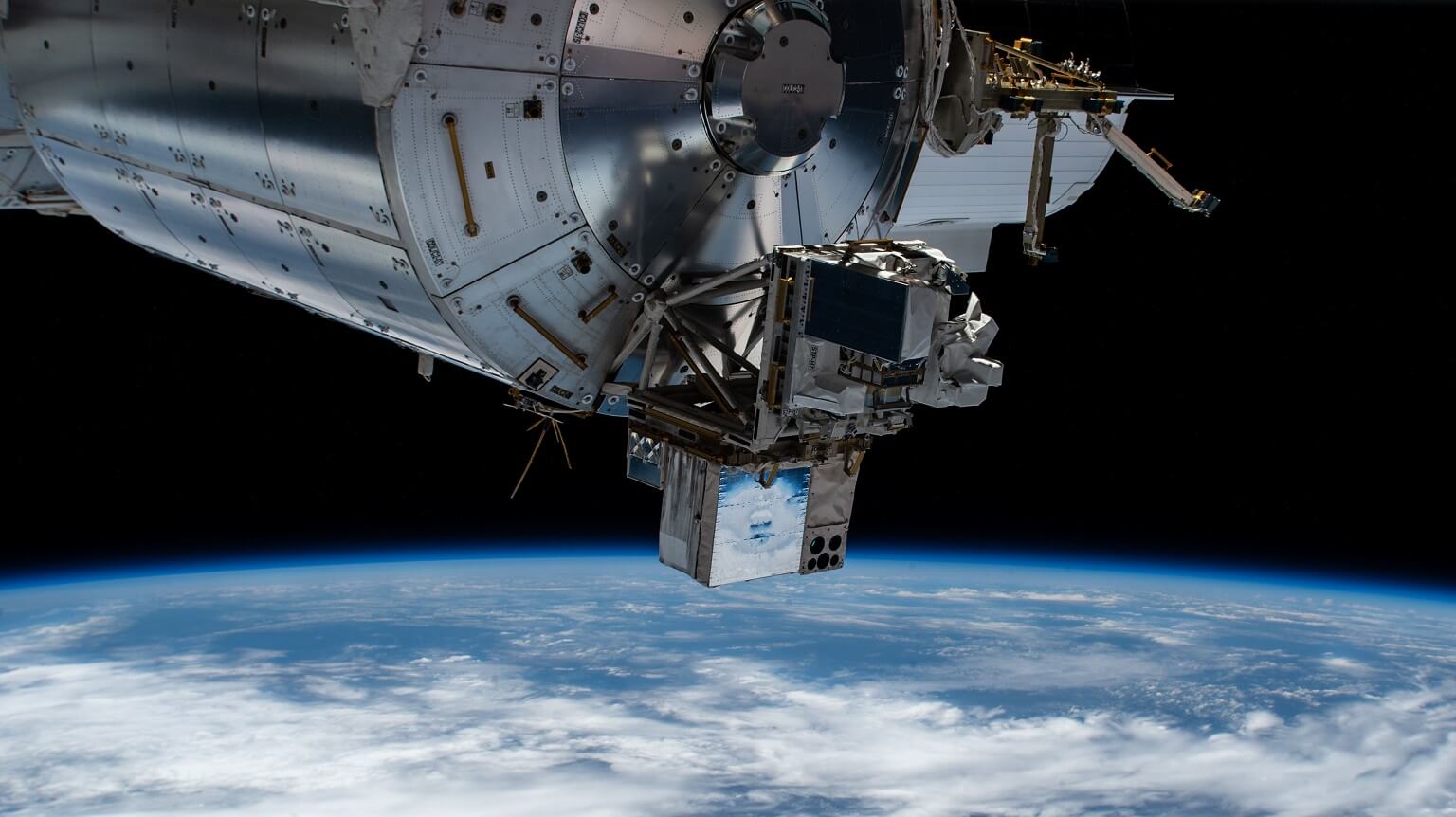 Falcon Neuro is hosted on the STP-H7/8 external payload in outer space. The payload was photographed by external cameras on the International Space Station. (Photo credit: NASA)

An ongoing project is Falcon Neuro, with cadets and faculty using neuromorphic cameras attached to the International Space Station to study lighting across the Earth and electrical discharges in space known as “sprites.”

Falcon Neuro represents the first use of neuromorphic data obtained from space. Its technology mimics biological systems such as the brain and the nervous system, responding only to changes in light.

Senior Cadet Rayomand Bam is project leader for the team of Falcon Neuro cadets and their research is managed by Geoff McHarg, physics professor and director of the Academy’s Space Physics and Atmospheric Center.

“The goal of the project is to investigate lightning and sprites from space,” McHarg said. “Overall, we hope to show sensors like Falcon Neuro have the capability to work as high speed cameras from a space-based platform.” Falcon Neuro’s neuromorphic cameras are more efficient and more responsive than their digital camera counterparts.

Bam said Falcon Neuro and other research projects at the Academy are supported by numerous government agencies including the Air Force Research Laboratory, the Defense Advanced Research Projects Agency, the Space Test Program, and leading industry and international partners.

“It’s all part of the ‘research bank’ cadets can access,” he said. 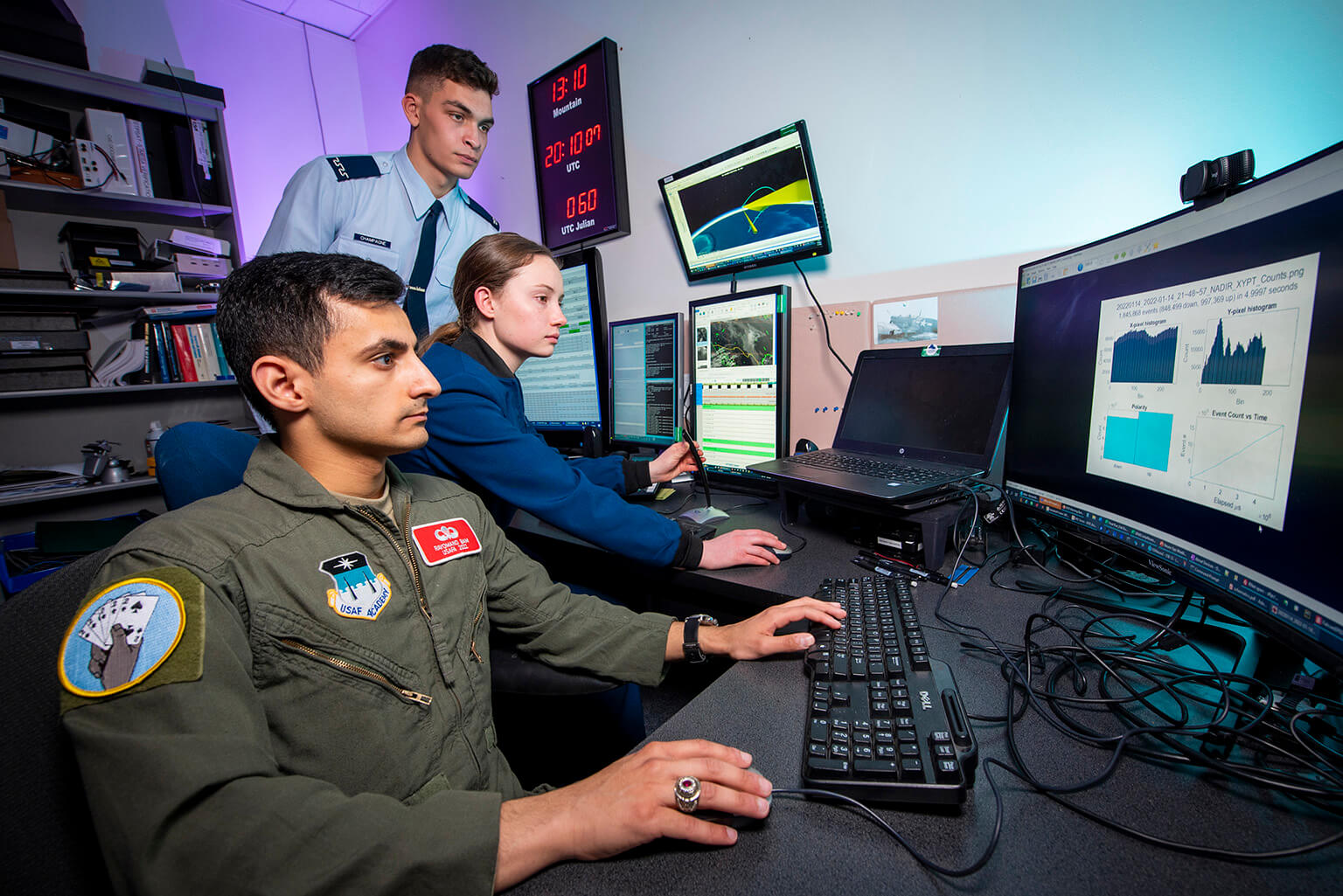 From back to front: Cadets Liam Champagne, Kaylee King, and Rayomand Bam conduct data analysis in the SPARC’s data operations center on March 1, 2022

Bam’s team is also researching the potential neuromorphic cameras offer the Defense Department in studying natural and manmade objects in space. The cameras are scheduled to orbit aboard the space station until July 2023 with images sent to the Defense Research and Engineering Network in Alexandria, Va., the Space Physics and Atmospheric Research Center, and the International Center for Neuromorphic Systems at Western Sydney University, Australia, led by Prof. Greg Cohen. Cohen’s team and Academy cadets developed the neuromorphic cameras to capture objects in orbit and share information to advance each nations’ space capabilities.

“It takes skill to build hardware for space, especially a crewed spacecraft like the International Space Station,” Cohen said. “This starts at the design process as you have to consider complications that don’t occur on Earth. Testing and fixing problems in space is incredibly challenging. It’s an immense achievement given we did this during the coronavirus pandemic and built the system separately in Australia and the U.S. It is a testament to the skills of our collective design teams that our cameras work and producing great data.”

Cohen said he and his researchers appreciate the collaboration between the Academy and the Center.

“Our partnership has been one of the most productive in our research group,” he said. “Exciting and ambitious projects require diverse teams to be successful. It is entirely the reason we’re called the ‘International Centre for Neuromorphic Systems.”’

Research is part of every cadet’s life, Bam said, and the Academy provides abundant opportunities for high school students looking for the right university to grow their scientific talent.

“The Academy does a terrific job of connecting cadets’ passions with the right people and places,” he said, “and the faculty has the expertise and ability to get you where you want to be. Everyone realizes the import roles they play and the implications of their research and that makes me want to work harder and do the best I can.” 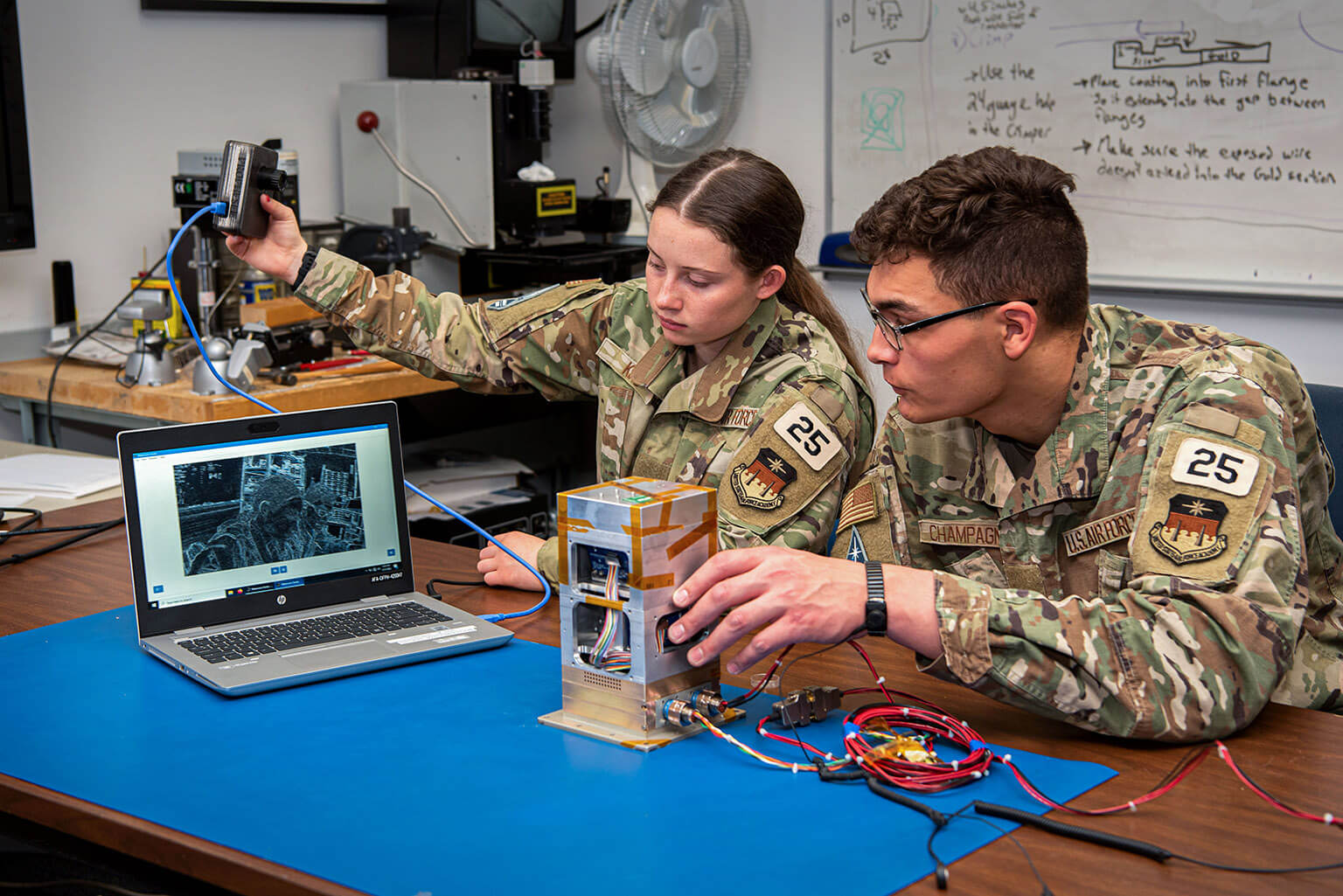 From left to right: Cadets King and Champagne analyze the Falcon Neuro engineering unit on March 31, 2022.