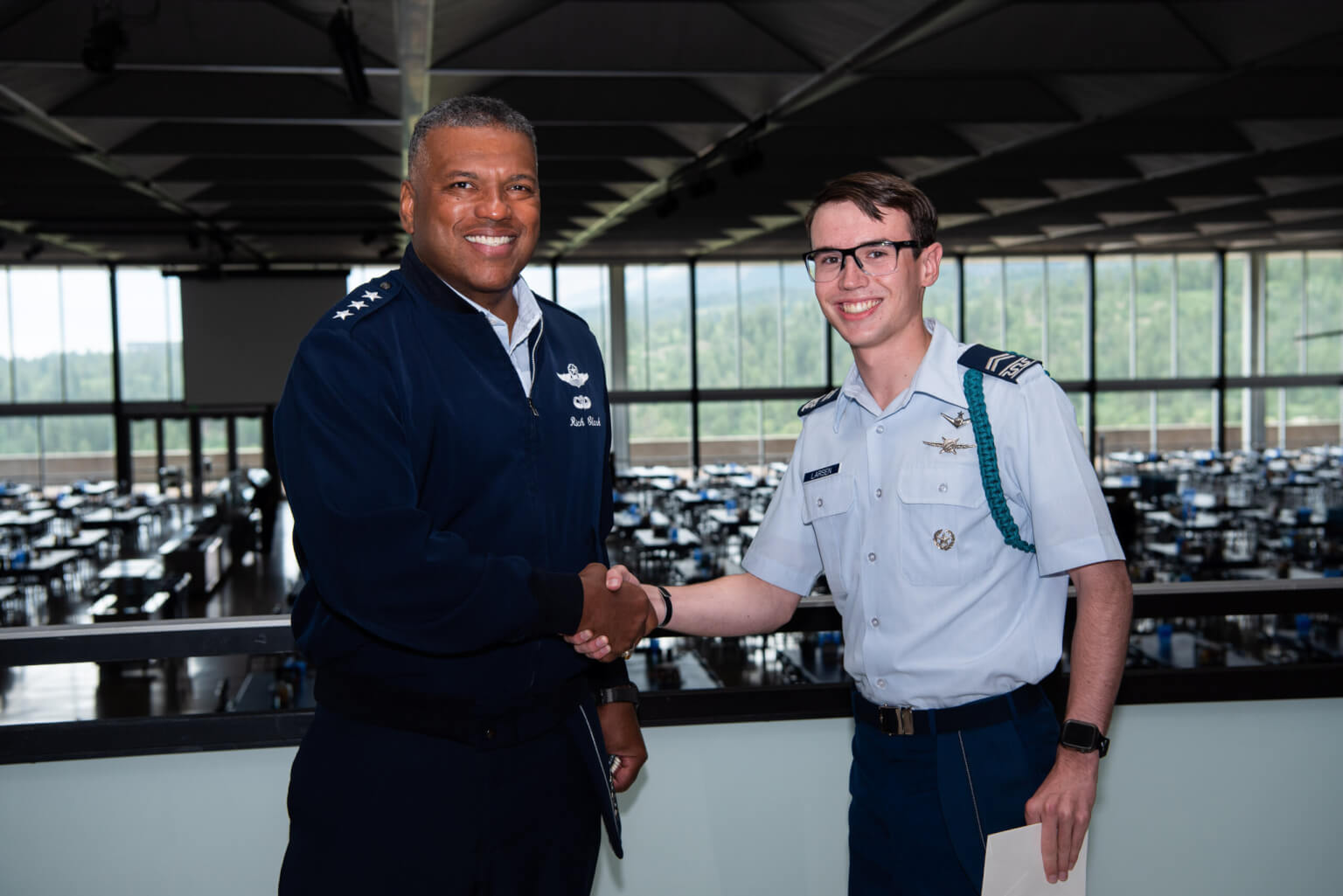 Lt. Gen. Richard Clark, superintendent of the U.S. Air Force Academy, shares a moment with Cadet 3rd Class Camden Larsen during the school’s first diversity, equity and inclusion innovation awards ceremony in Mitchell Hall, Aug. 16. Camden was recognized for his leadership, work with the Academy’s Spectrum Club, and his involvement in the school’s diversity efforts.

U.S. AIR FORCE ACADEMY, Colo. – Several cadets and a faculty member were recognized for their individual and team efforts in support of the U.S. Air Force Academy’s diversity, equity and inclusion programs Aug. 16.

The diversity, equity and inclusion innovation awards recognize cadets, faculty and staff. Nominees are evaluated on their operational impact, innovation and inclusive leadership. Lt. Gen. Richard Clark, the Academy’s superintendent, presented the awards during the Tuesday ceremony in Mitchell Hall.

“This award is an absolute honor and a charge to continue creating an inclusive culture at the Academy and across the Air Force,” Larsen said. “Inclusivity allows for unique perspectives that help create a more resilient force ready to defend the U.S.”

Of all his diversity-centered accomplishments, Larson said he’s most proud of his work with the Spectrum Club initiatives team.

“This work has been a tremendous honor,” he said.

Another accomplishment Larsen said he’s “particularly proud of” is working with cadets and staff across the base to increase awareness and understanding of Defense Department and Department of the Air Force policies and information concerning the school’s LGBTQ+ community.

“We have an obligation to represent America and its diversity,” he said. “Our diversity allows us to be more effective, efficient and equitable not only in our jobs as military members, but also in the communities we call home.”

The Face of America is Changing 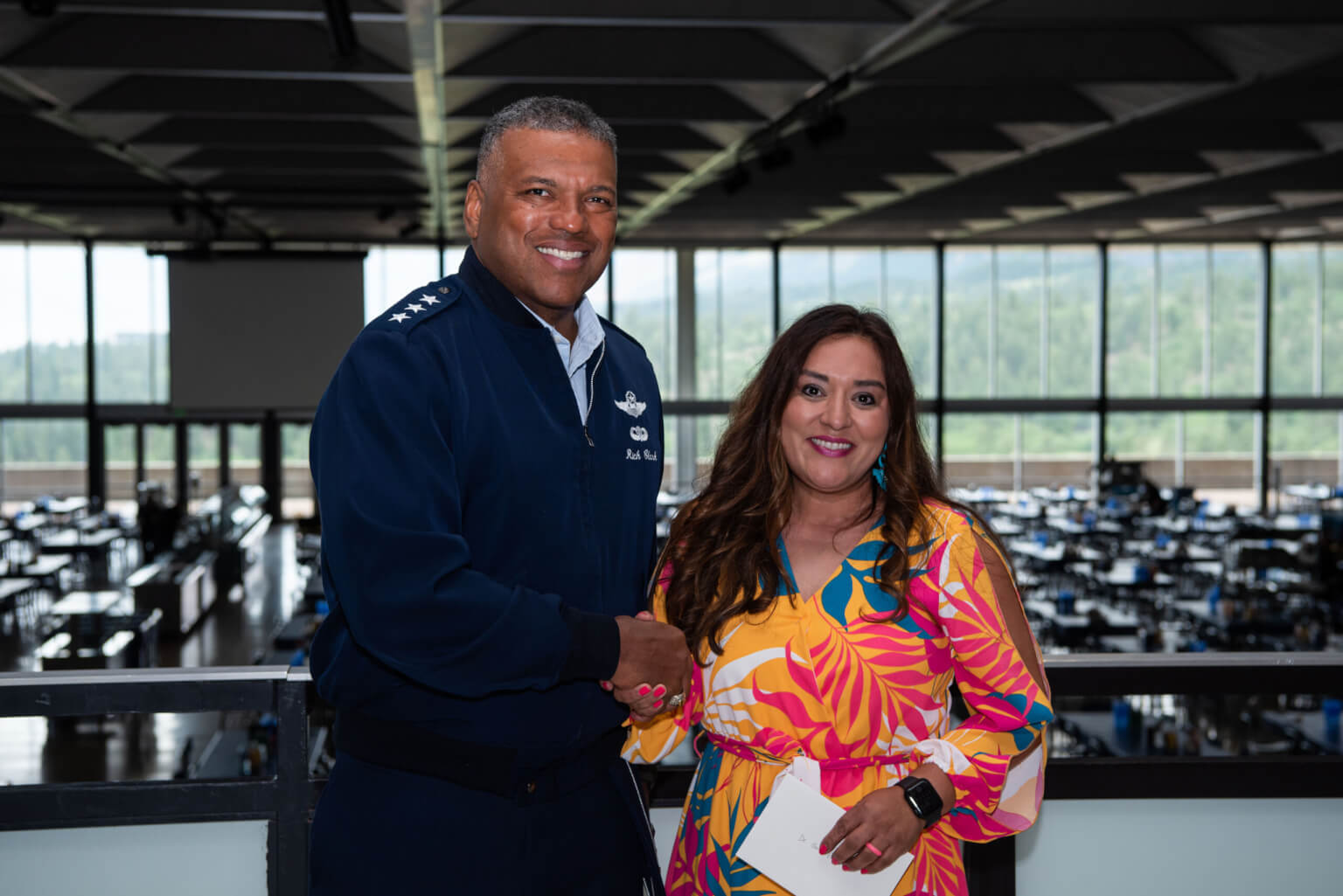 Lt. Gen. Richard Clark, superintendent of the U.S. Air Force Academy, congratulates Dr. Sonia Esquivel, a Spanish language professor at the school, after she receives the diversity, equity and inclusion innovation award in the permanent party category, Aug. 16. Esquivel was recognized for her involvement in the Academy’s diversity efforts, her work with cadet parents who do not speak English, and other accomplishments.

Along with teaching cadets, Esquivel leads the Academy’s Hispanic Heritage Club and mentors underrepresented cadets. She also helped created the Hispanic alumni organization, Los Padrinos, and works with parents of cadets who do not speak English.

“Our institutional diversity efforts add to our collective society in such a positive manner,” she said. “The face of America is changing and we’re a better Air Force because of our diversity. My hope for our cadets is that they continue enriching themselves by learning about different cultures and perspectives, and lead with empathy, understanding, awareness and respect.”

The cadets recognized with the team award assisted with more than 35 cultural heritage events, developed plans for commanders in response to the DOD’s annual defense organizational climate survey findings, among their other accomplishments.

“I am inspired and humbled by the dedication, commitment and vision of our award winners,” said Dr. Joseph Looney, the Academy’s equity and inclusion officer, and former head of the school’s behavioral sciences and leadership department. “They give me great hope for, and pride in, the future of our military services and our Academy as we work together to enhance our cadets’ ability to innovate, prepare for future conflict and lead talented Airmen and Guardians.” 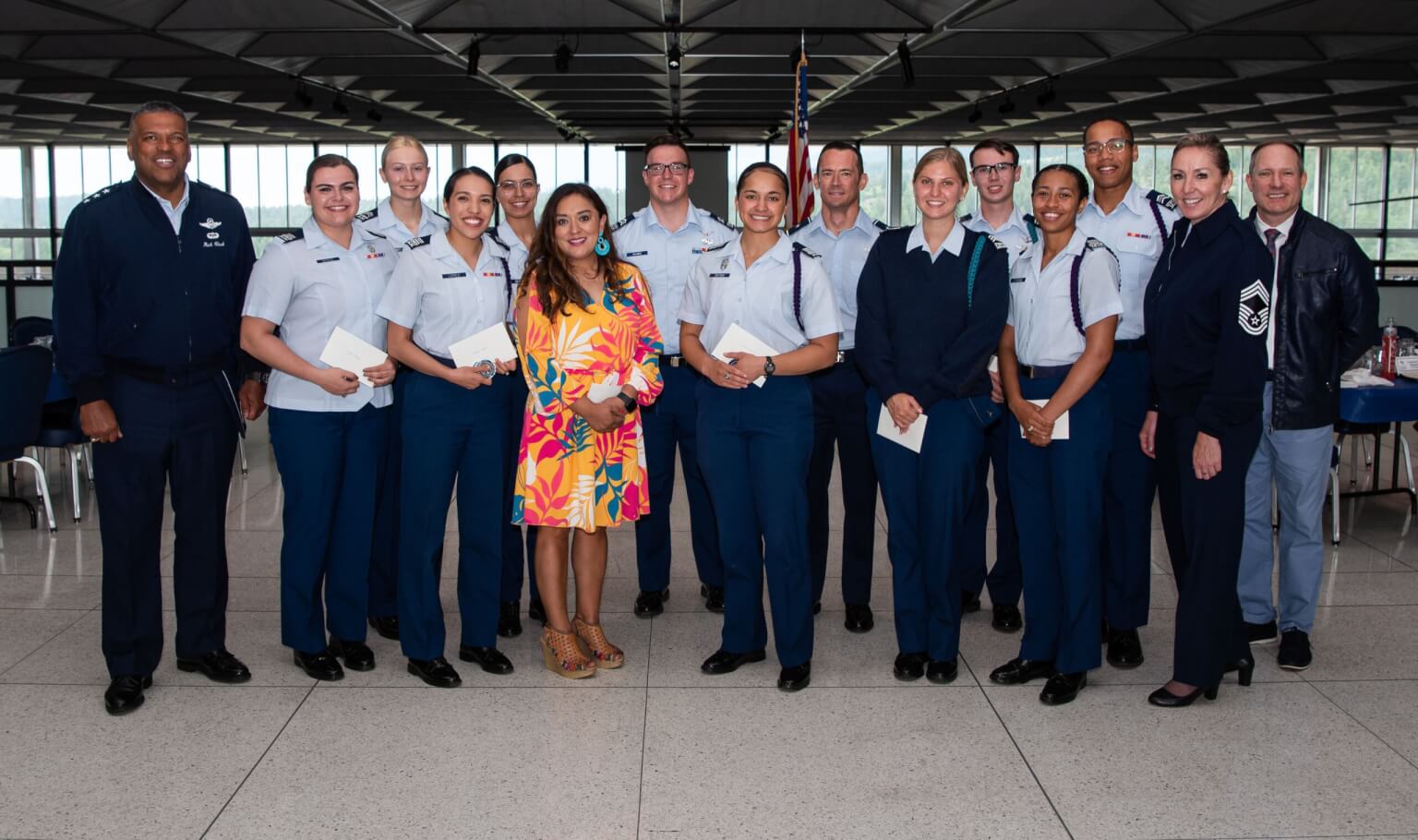