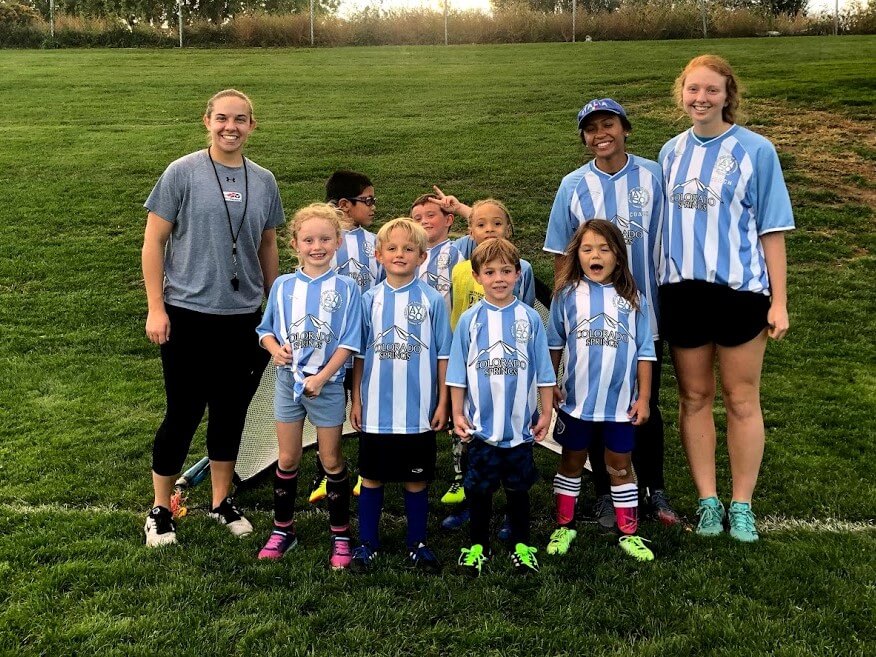 Sara Burton (far right), a junior cadet at the U.S. Air Force Academy, stands with the children and staff on the  Avengers soccer team, sponsored by the Colorado Springs youth sports program. Burton was the team’s head coach until the season ended in October.  (Courtesy photo by Deb Gravelle)

U.S. AIR FORCE ACADEMY, Colo. — Sara Burton, a junior cadet at the Air Force Academy, grew up in a soccer family, the daughter of a soccer coach and one of five siblings who all played the sport.

Sara started playing as a six-year-old in Martinsburg, West Virginia, and now she’s come full circle as a volunteer youth soccer coach with the Colorado Springs Parks and Recreation Department.

“On the first day of practice, I asked one of the girls if she knew how to dribble, and she did the basketball dribbling motion, and I thought ‘oh boy, I’m in for it,’ but that was exactly where I was at that age,” she said.

Burton reached back to the skills her dad taught her: dribbling, passing, getting open and shooting. Her team of five to eight-year-olds, the Avengers, recently closed out their six-week season with a record of 2-5-1, but their overall progress really stood out to Burton in their final match up.

“They managed to crush the last team that they played, something like 6-3, and they were moving around in the right ways and understanding their positions. I thought, ‘It’s actually worked,’” she said.

According to William Davis, the Colorado Springs youth sports program coordinator, the soccer program has 140 volunteer coaches during the fall, winter and summer. Academy cadets account for 25 percent of their volunteer coaches.

“Having the Cadets volunteer coach for our youth soccer program is vital to our program’s overall success,” he said. “Without them, we simply would not be able to have the number of teams and players we have in our soccer program.”

Davis said cadets bring energy and excitement to the program, and he hopes they would continue to volunteer.

“Youth sports coaches can play a significant role in a young person’s life,” Davis said. “I truly feel the cadets are role models for these kids. They understand and display important characteristics like commitment, work ethic and teamwork, which helps the kids not just become better athletes but better people.”

The two or three times a week she volunteered with the team served as pick-me-up and stress-reliever for the busy cadet while challenging her to be a patient leader.

“It makes you feel better about yourself if you know you’re doing something good with your time,” she said. “You get to give back to the community, and see these kids grow, and it helps build confidence in your leadership skills.”