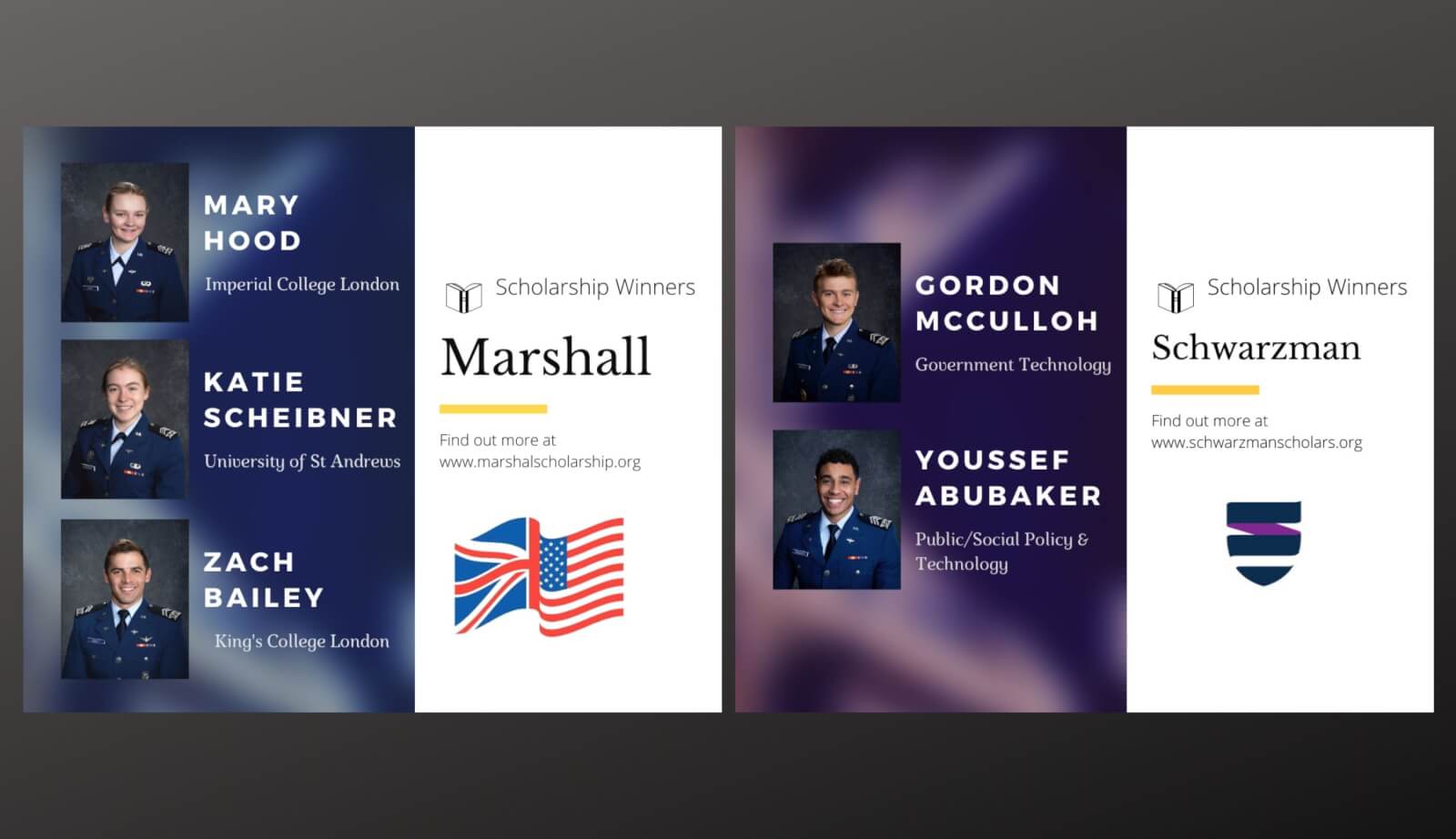 Cadets 1st Class Zach Bailey, Mary Hood and Katie Scheibner received the Marshall Scholarship, designed to strengthen the relationship between the U.K. and the U.S. Funded by the British government, the scholarship allows U.S. scholars to pursue a master’s degree at any university in the U.K.

Bailey will study at King’s College and Hood at Imperial College in London. Scheibner will study at the University of Saint Andrews in Fife, Scotland.

“I couldn’t believe I was offered the scholarship,” Bailey said. “I never thought I’d be in this position four years ago when I decided to come to the Air Force Academy.”

Bailey, a mechanical engineering and premed major from Madison, Mississippi, plans to be a physician.

Hood, also a mechanical engineering major, is from Alamosa, Colorado, plans to be a pilot.

“I thought I tanked the interview [for the scholarship],” she said. “I was actually in the midst of telling my dad how disappointed I was when I got the call. I couldn’t believe it.”

Hood said she’s enjoyed her educational experience at the Academy and the diversity of the school’s curriculum.

“I’ve also really enjoyed all the opportunities I’ve been given here – summer research, the various conferences and traveling internationally through the cultural immersion programs,” she said.

Schiebner, from Woodbury, Minnesota, is a computer science and Mandarin Chine major who plans to be a cyberspace operations officer.

“The greatest part of the U.S. Air Force Academy is absolutely the people,” she said. “Although the coursework is rigorous and the expectations are high, the faculty and my fellow cadets are amazingly supportive.”

Schiebner was strolling with her parents when she received the call telling her she’d earned the Marshall Scholarship.

“I had such a big smile on my face that they figured out what was happening before I even hung up the phone,” she said. “It was special to be able to celebrate together.”

“I’m humbled to have this opportunity,” Abubaker said. “I had to tell my mama first thing.”

The Schwarzman Scholarship prepares grad students to build stronger relationships with China and address challenges of the 21st Century.

Abubaker, an operations major from Hasbrouck Heights, New Jersey, plans to be a research analyst.

McCulloh, an astronautical engineering and applied mathematics major from Kennebunk, Maine, plans to be an astronautical developmental engineer. He was studying algebra when he heard his interview for the scholarship didn’t go as bad as he thought.

“I remember feeling surprised because I thought I’d bombed the interview,” he said.

Abubaker, Bailey and McCulloh had high praise for the Academy’s faculty.

“We’re surrounded by exceptional leaders willing to sacrifice everything to help us,” Abubaker said. “I wish everyone back home knew about the Academy and how this institution can change your trajectory and path in a positive way.”

Bailey said he owes his academic success to the faculty.

“If not for the investment that has been put into my development by the faculty, I would not be here today,” he said. “Every time I reached out to my instructors, I was either being pushed to be better, or supported when I needed help working through an issue. They served as role models whether they knew it or not.”

“I’ve been fortunate enough to learn from a slew of excellent professors who understand the pace of cadet life and are able to adjust to meet our needs,” he said.

The Marshall Scholarship program receives more than 1,000 applications from U.S. college students each year. About 40 scholars are selected annually.

The Academy’s Schwarzman Scholars are among 145 students and recent college graduates selected this year from more than 4,700 applicants from 41 countries. Abubaker and McCulloh are two of more than 400 scholarship candidates to interview in front of panels in Bangkok, Beijing, London and New York.

The scholarship winners are scheduled to graduate from the Academy May 28. 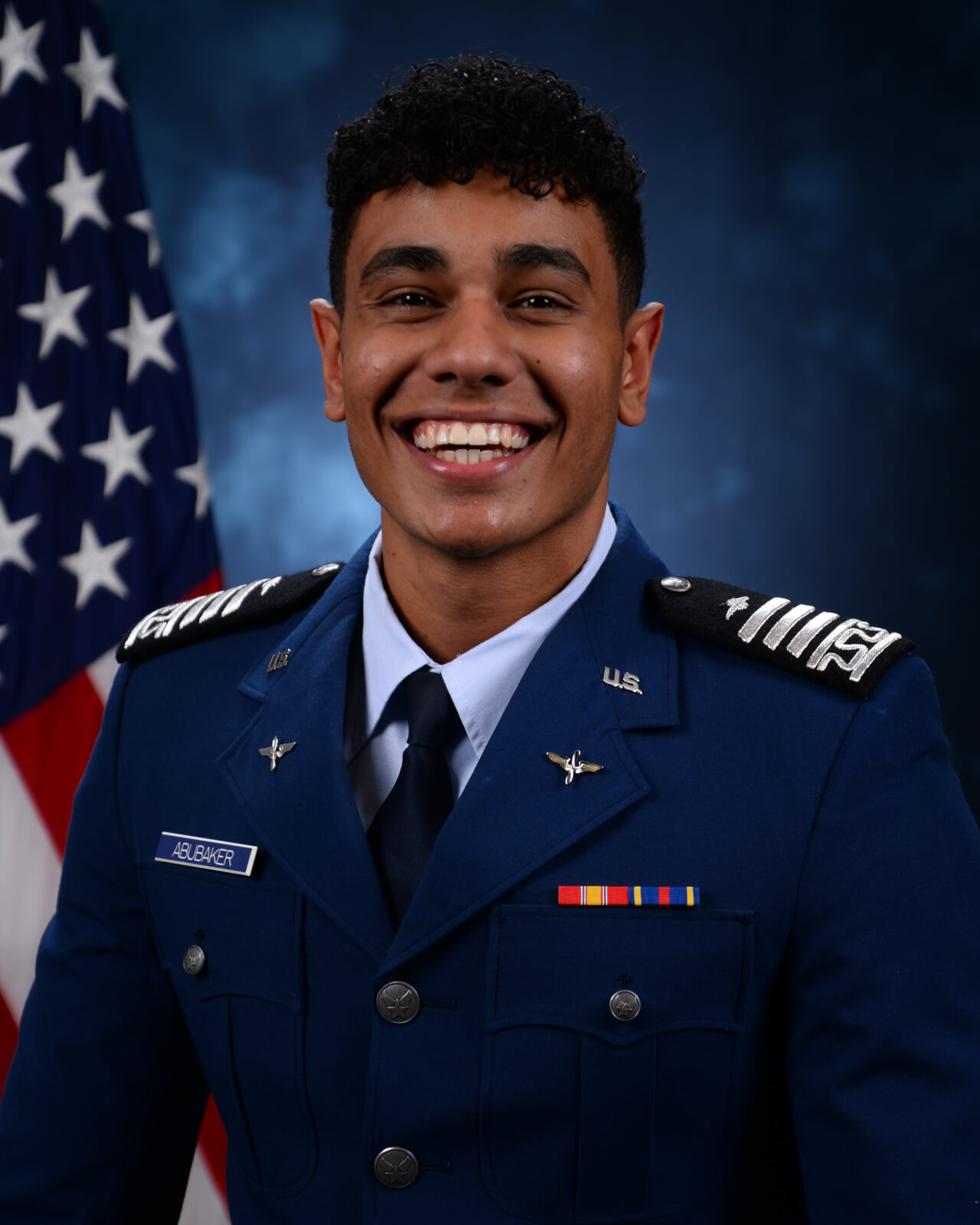 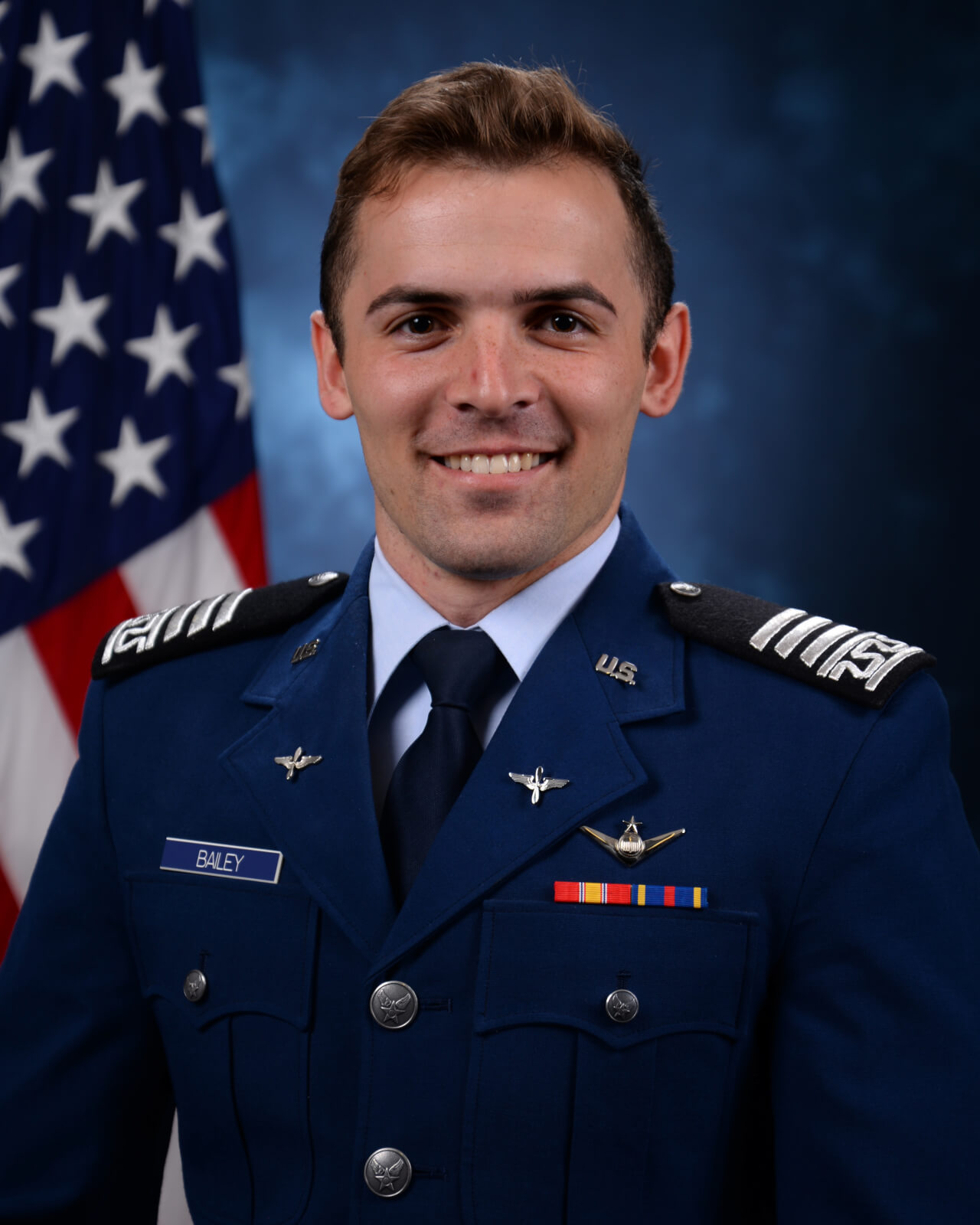 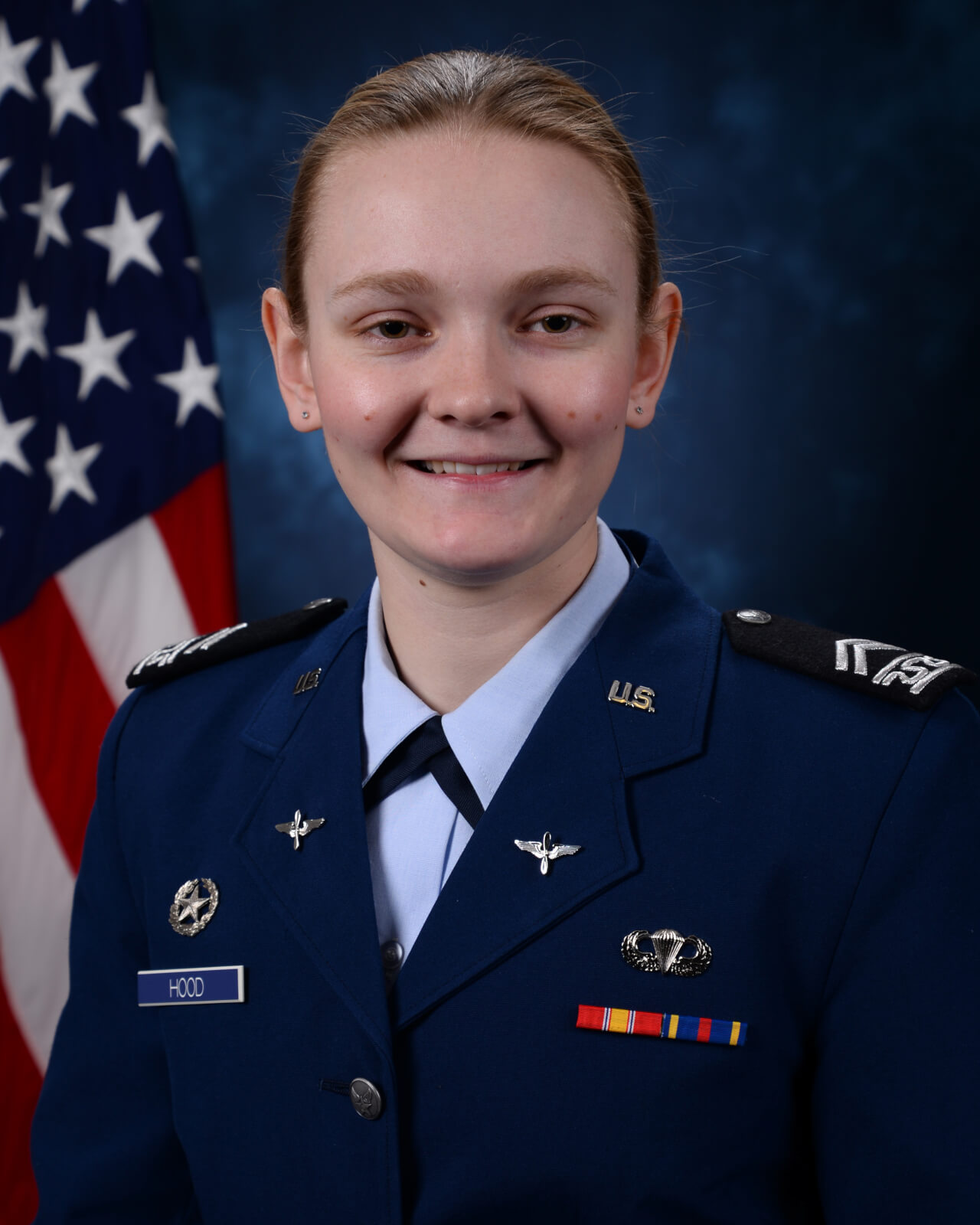 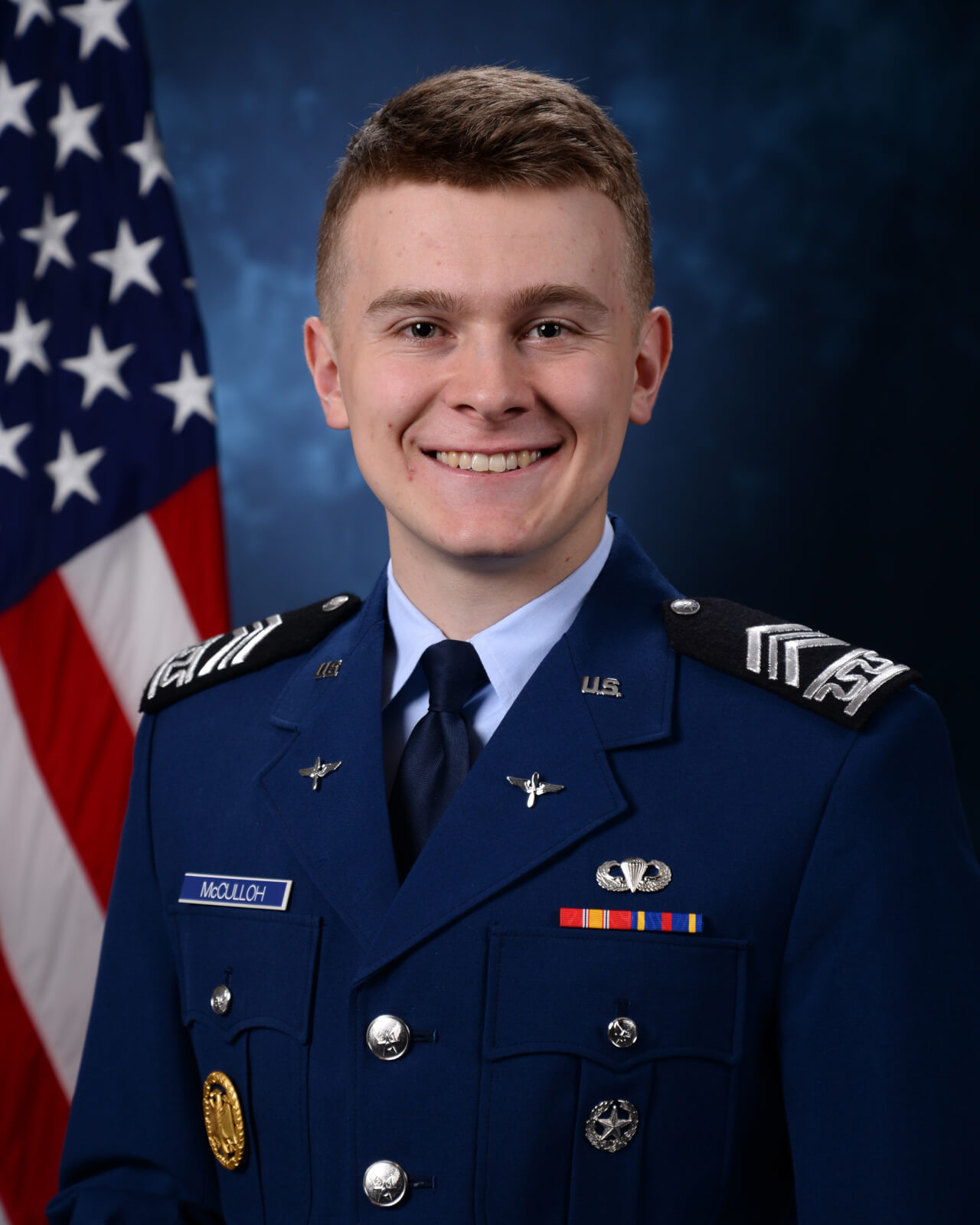 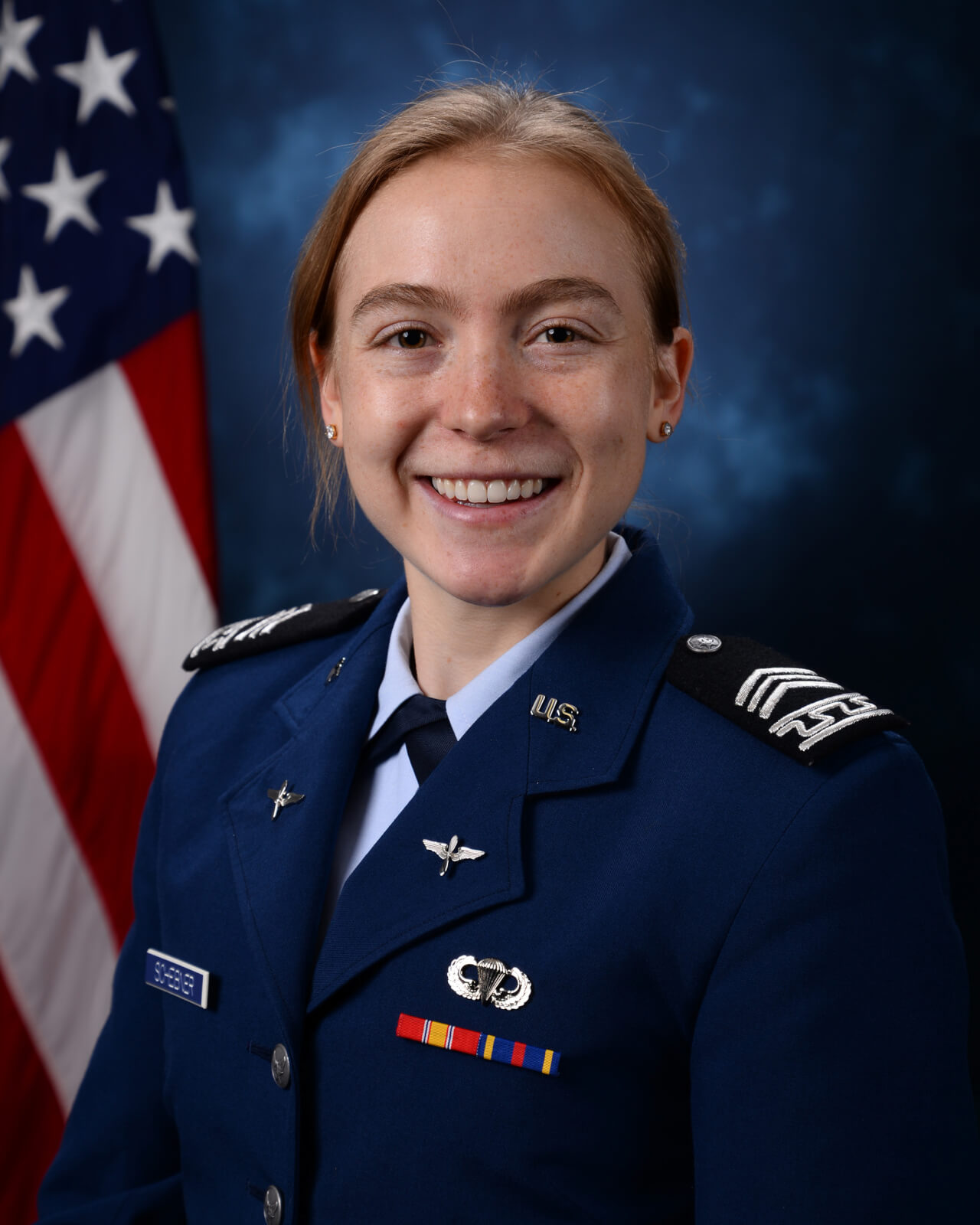