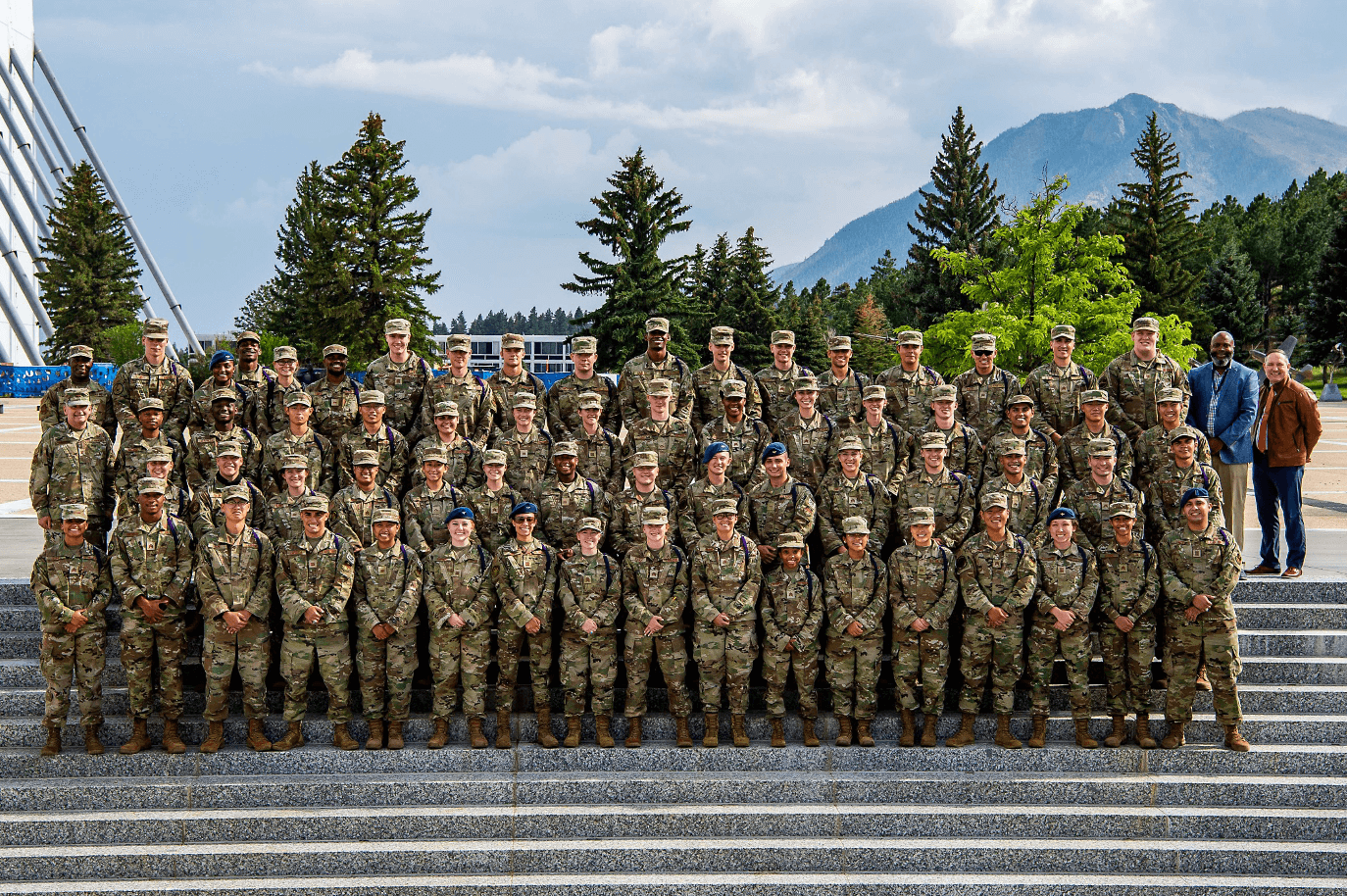 Cadets pose for a photo after graduating from the Cadet Wing Diversity and Inclusion Program this summer, allowing them to advise students on diversity at the U.S. Air Force Academy. Each cadet wears a purple rope across their left shoulder symbolizing their position as a diversity representative. (U.S. Air Force Academy photo)

A team of 82 cadets and a few faculty and staff members, champion dignity and respect at the school, including Cadet 1st Class Richard Pardey, the cadet in charge of the program who grew up in Colombia.

“Every cadet has an experience, belief, characteristic or something of their own making them unique,” he said. “Our goal is to give voice to each cadet and provide an opportunity for cadets to learn about each other.”

“The program promotes inclusive leadership and valuing different perspectives to enhance cadet squadron effectiveness,” said retired Col. Joseph Looney, the school’s diversity and inclusion chief who holds a doctorate in counseling. “It advocates for equitable treatment of all cadets, ensuring they have the opportunity to thrive, and educates cadets on the cultures, backgrounds and identities of the Airmen they will lead in the future.”

Looney said the program is for all cadets.

“The Academy’s leader of character framework emphasizes living honorably, lifting others and elevating performance,” he said. “Showing dignity and respect is a cornerstone of living honorably. Inclusive leadership is a vital means for a leader to lift others and elevate performance, and the program significantly contributes to preparing future leaders to lead diverse teams of Airmen and Guardians.”

Diverse Appreciation
In September, the DOD marked the 10-year anniversary of the “don’t ask, don’t tell” repeal, ending the 17-year policy enforced by the department.

“The 10th anniversary today of the repeal of ‘don’t ask, don’t tell’ reminds us that when we strive for greater inclusivity, we help strengthen our nation’s defenses,” Secretary of Defense Lloyd J. Austin III said Sept. 20. “By insisting on standards of merit and allowing to serve in uniform all those who are qualified, we avail ourselves of more talent, better leaders and innovative solutions to the security challenges we face around the world.”

In May, in the wake of policy changes made by the president and DOD regarding transgender service members, the Academy created a Transgender Working Group to assist senior officials at the base address specific concerns about the policy as it relates to cadets.

“While cadets are technically on active duty status, there are very unique things they must do within a set timeline,” said Staff Sgt. Seth Stang, a member of the Transgender Working Group. “We assist commanders in meeting the requirements of the policy while still fulfilling the Academy’s four-year mission.”

Along with organizational representation, the Transgender Working Group has cadet representatives from the Spectrum club, Looney said. The cadet-driven Spectrum Club at the Academy provides a support network for gay, lesbian, bisexual and questioning cadets and their allies, and creates an educational experience for all cadets dedicated to the retention, development and commissioning of culturally and socially competent junior officers, according to the club’s mission statement.

Heritage and diversity months celebrated by the Defense Department are also lauded at the Academy.

“Imagine what 4,000 minds can accomplish,” he said, referring to the school’s 4,000 cadets. “It’s time to put those 4,000 cadet minds to use in working toward a better Academy. A diverse Air Force is a strong Air Force.”