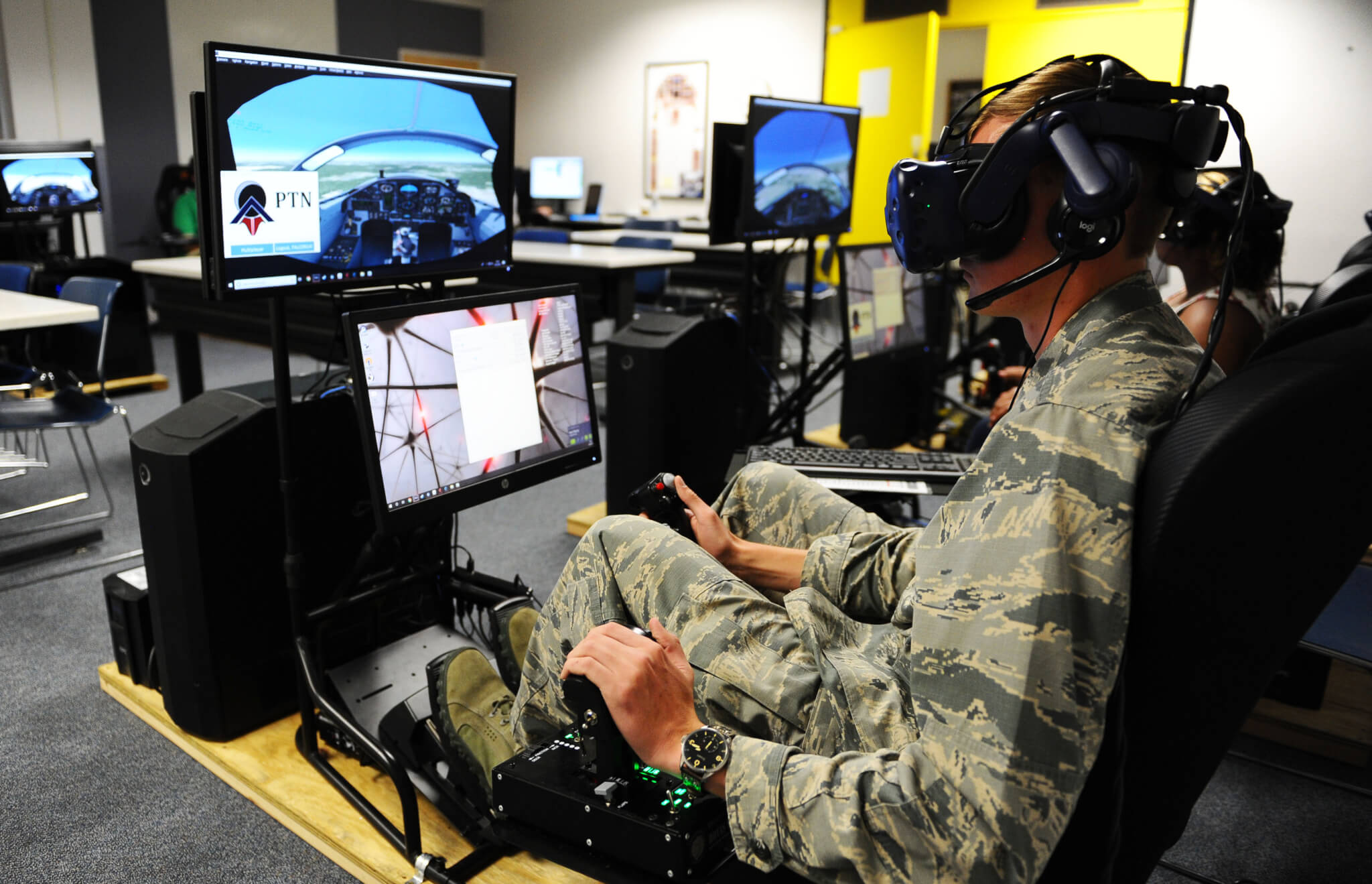 Launched at the start of the fall semester, Airmanship Next augments live-flight at the airfield with virtual reality training to reach cadets who may have been excluded in the past by scheduling conflicts and infuses more aviation training into the four-year cadet developmental model.

“The reality is that less than half of the cadets from a typical class experience powered flight,” said Col. John Garver, Academy director of operations and analysis. “We want to inspire cadets to go into rated careers by eliminating situations where cadets are interested in rated operations but have limited opportunities to try them out.”

The Academy has purchased 16 immersive training devices and will add 12 more by early next year; the devices will be split between the cadet area and the airfield. The low cost per unit, ability to continue training when weather does not allow flying at the airfield, and 100% completion rate offered through the Cadet Aviation Lab creates a win-win situation for the Academy and its cadets – everyone has the opportunity to experience USAF operations via an immersive airmanship course, he said.

“[The program] will help us meet cadets where they are and tailor their experiences to get them where they need to go to make informed career choices, including whether to volunteer for rated positions,” Garver said.

Training on immersive training devices can be customized to benefit different learning styles and cadets can focus on getting multiple repetitions on key aviation skills. Confidence building in a low-threat environment helps boost the cadet’s confidence in their ability to succeed in aviation careers, he said.

“The amount of people who can go through this training and grow in their airmanship skills – I think it’s amazing, and I recommend it all the cadets in my squadron,” said Cadet 2nd Class Daniel Shemon. Shemon volunteered to be one of the first cadets to go through the virtual reality training. He is currently enrolled in powered flight and intends on pursuing a rated career as a pilot.

“Sometimes I come to the lab in the evenings to get in some extra practice on certain skills – approaches, pattern work, you name it – it really helps me develop my muscle memory,” he said.

Initial feedback has shown a positive correlation between early participants in the virtual reality training and live-flight performance in powered flight.  Powered flight solo flights and overall completion rates are higher than they have been in previous years.

“The cadets are showing up a lot more prepared and knowledgeable about radio calls and traffic patterns,” said Capt. Bryan Rhoades, powered flight program flight commander and 2012 graduate. “It’s the difference between training a cadet who is a blank slate and a cadet who would be appear to have a flight or two already under their belt.”

Cadets in powered flight typically complete 12 flights before solo and check ride flights. He said the ITDs allow him to maximize that training time to prepare cadets to be successful at post-graduate flight training.

As the Academy works closely with Air Education and Training Command to produce qualified pilot candidates, the program is also pursuing an Initial Flight Training equivalency option for top cadet performers from the class of 2021.

[Editors Note: The goal of the Airmanship program is to provide an operations-based experience utilizing current and immerging assets centered on one of the Air Force’s three core mission domains – Airpower – in order to develop Leaders of Character for today and tomorrow’s Air Force.  The continued success of Airmanship Next is crucial to ensuring the Academy graduates and commissions the best-prepared rated candidates for the Air Force.]